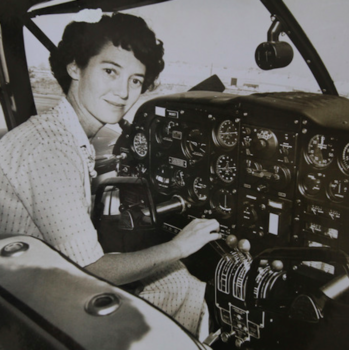 Betty Miller was a record-breaking pilot whose interest in airplanes began at a young age while she was growing up near the Santa Monica airport in California. She learned to fly at a flight school in Wendover, Nevada in the early 1950s and made her career as a helicopter pilot and flight instructor at the Santa Monica Flyers flight and ground school she ran with her husband. Betty worked as an instructor, dispatcher, bookkeeper and maintenance scheduler. The school started with 23 students and graduated more than 4,000 new pilots. 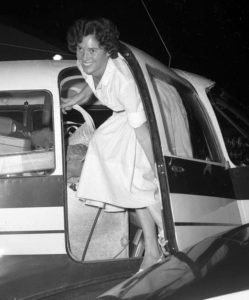 Betty Miller at Brisbane, Australia upon the completion of her solo trans-Pacific flight. Photograph from the Courier-Mail Photo Archives.

In those days, small airplanes did not have the fuel capacity to make long trips, especially overseas. They were taken apart, shipped, and then reassembled at their destination. In 1963, Betty volunteered to fly a small American-made plane from California to Australia for a buyer who did not want to have to assemble the aircraft. A flight plan and new, larger fuel tanks were developed to make the trip possible. While many people knew of Amelia Earhart’s solo flight across the Atlantic in 1932, no woman had flown solo across the Pacific Ocean, which motivated Betty to take on the adventure.

Betty used her training as a radio specialist to navigate, trying to check in with ships or ground stations every half hour when possible. She wore a cotton dress and heels on the long flight, and told The Associated Press that “the days of the leather jacket and the helmet are gone.” She made stops in Hawaii, Canton Island, Fiji and New Caledonia. On the flight to Hawaii, she flew 20 hours straight, and she also dealt with equipment problems and a hurricane. Her historic flight totaled 7,415 miles and took over 51 hours of flight time to complete. When she landed in Brisbane, Australia, she officially became the first female pilot to fly solo across the Pacific Ocean. Flying solo meant she was the pilot, navigator, and engineer of the plane. Her only passenger was her lucky troll doll, named “Dammit.” 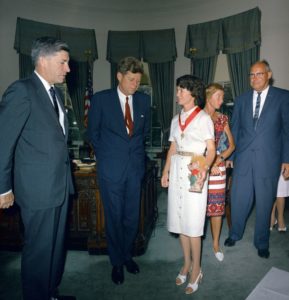 Betty Miller in the Oval Office with President Kennedy and her lucky troll doll. Photo courtesy of the John F. Kennedy Presidential Library and Museum.

For Betty’s achievements, she was awarded a Federal Aviation Administration’s Gold Medal for Exceptional Service and a Harmon International Trophy for Aviatrix of the Year in 1963. Following her record-breaking flight, Betty continued to fly helicopters and taught operations classes at California flight schools. NASA asked her to help develop the physical requirements for female astronauts and she chaired the FAA’s Women’s Advisory Committee on Aviation. Later in life, she moved to Bountiful, Utah where she finished out her record-breaking career and continued to influence young female aviators until her death in 2018.