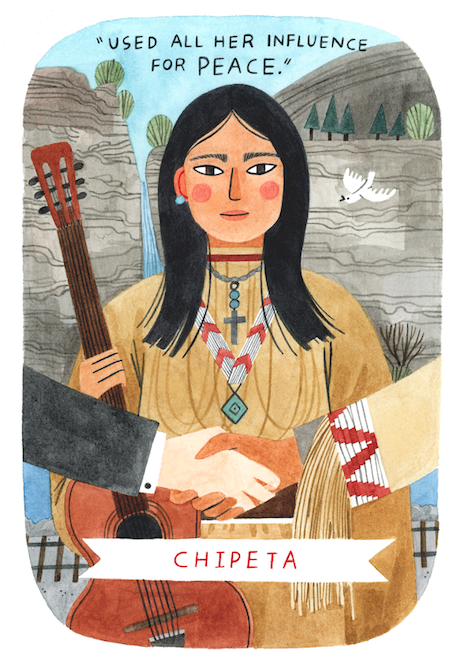 “Used all her influence for peace”

by Naomi Watkins and Katherine Kitterman

with Forrest Cuch and Greg Thompson 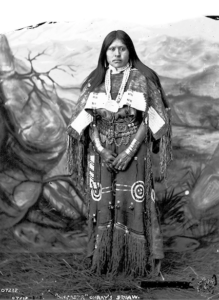 Chipeta, “White Singing Bird,” was adopted and raised by the Uncompahgre Utes of present-day central Colorado after her Kiowa Apache parents were killed. She became skilled in the Ute tradition of beadwork and tanning hides, played the guitar, and sang in three languages. After marrying Ute Chief Ouray, she became his advisor and confidant, often sitting beside him at tribal council meetings when it was not usual for women to attend. Together, they worked for better conditions for the Ute people and strived to live peacefully with white settlers.

It is said that Chief Ouray and Chipeta warned white settlers of an impending attack and often gave them navigational directions. However, tensions rose as gold was discovered on Ute land, and white settlers and the U.S. government tried to take the land and convert the Utes to farming and Christianity. Ouray and Chipeta also negotiated several treaties with the U.S. government, including traveling to Washington D.C. to testify before Congress. Chipeta’s opinion was sought by both whites and her people. She later met President William Taft and did her best to help with treaty negotiations even though the terms were seldom kept by the government. The tribe was eventually forced to leave their homes in Colorado (Chief Ouray died before this occurred), and they were removed to northeastern Utah, now the Uintah and Ouray Reservation. Chipeta continued as tribal leader. 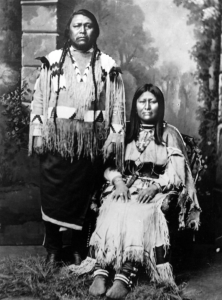 A few years after removal, a former Indian agent was sent to check on Chipeta and found her “destitute.” The U.S. government had not followed through on its promises of good land and homes. He wrote the Commissioner of Indian Affairs asking that irrigation water be brought to the parched land. Instead, Chipeta was sent a shawl. She always shared the little food and provisions she had with others and was often asked for advice because of her work and travels with her husband. A sort of celebrity in her later years, Chipeta died the same year that the U.S. government gave citizenship to Native Americans. She was eventually reburied at her previous home, now the Ute Indian Museum in Montrose, Colorado.

Forrest Cuch is the former Director of Utah Division of Indian Affairs. Greg Thompson, Ph.D. is the Associate Dean of the University of Utah J. Willard Marriott Library for Special Collections and Adjunct Assistant Professor of History.