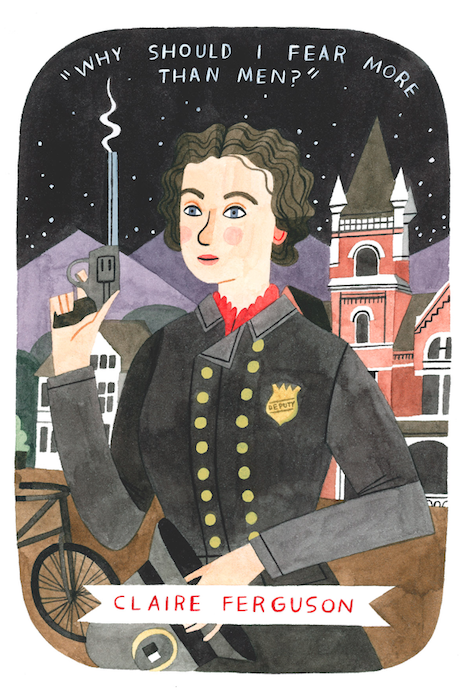 “Why should I fear more than men?”

At first glance, many in Utah–and across the nation–may have concluded that Claire Ferguson was out of her league when she was appointed as Utah’s first female deputy sheriff in 1897. Keeping the peace was traditionally a man’s job. It required nerve and bravery perhaps considered beyond the scope of a 20-year-old girl from Salt Lake’s higher society. Noted by one paper as “a belle of SLC,”[1] she was described as having a slender stature, prepossessing face, and gentile manners, with “no suggestion of either strength or endurance.”[2] But Claire ultimately proved all the naysayers wrong. She successfully completed her two-year tenure as a deputy sheriff of Salt Lake County with great skill and accomplishment. 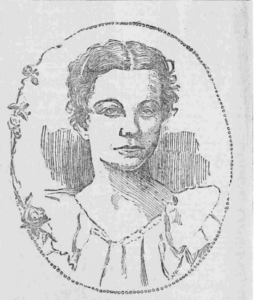 Raised by her widowed mother, Claire Ferguson most likely learned at an early age the important role that women must play in society for a community to thrive. Born in Provo in 1877 to Dr. Ellen B. and William Ferguson, Claire’s family soon moved to Salt Lake City, and Claire remained a city resident throughout her formative years. Shortly after moving to Salt Lake, her father William died. Dr. Ellen B. Ferguson worked as a physician in Salt Lake to support her family and was instrumental in the opening of the Deseret Hospital, serving as its first resident physician. Dr. Ferguson was also influential in the suffrage movement of the 1890’s, serving as president of the Salt Lake County Woman Suffrage Association (WSA). In addition to the intangible education she undoubtedly received at the hands of her mother, Claire received formal education in the Salt Lake public schools as well as at Deseret University. Throughout her teenage years, Claire worked with women’s suffrage associations, met presidential candidates, gave political speeches and provided musical entertainment at social events throughout Salt Lake City. Claire was also athletic, loved to ride bicycles and horses, and be outside.

She first began working in the Salt Lake County sheriff’s office as a stenographer. Sheriff Thomas P. Lewis appointed her to the office of deputy sheriff in 1897. Having been surrounded by articulate, strong-willed, intelligent women throughout her upbringing, Claire could appreciate the importance of women in the public sphere and felt no trepidation about accepting the position. When asked about the potential dangers of undertaking such a job, Claire stated, “I know…that events may come up at any time which may place me in dangerous places, but I am willing to take my chances. Why should I fear more than the men? The duties of the Sheriff’s office must be performed, and if a woman has the proper amount of self-reliance and energy I cannot see why she should not be perfectly able to carry out her orders as well as a man. I feel like I can, and I am going to strive during my term in office to perform my duties faithfully and without shirking the unpleasant portion of the work.”[3] Another paper noted that Claire felt “prouder of the appointment for my mother’s sake than for my own.”[4] 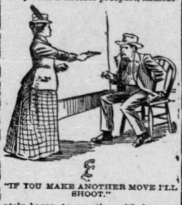 Claire’s duties as deputy sheriff involved transporting women patients to the asylum in Provo, Utah, serving papers to those who had to answer to the law, serving jury summons, and handling defendants during trials at the county courthouse. She did not have much experience shooting weapons before her time as a peace officer, but after training alongside the other members of the sheriff’s department (all men), she soon became skilled with a revolver. One paper reported that she could “shoot a small piece of paper 9 times out of 10 at a distance of 10 yards.”

Newspapers around the country reported on the exploits of one of the nation’s first female deputy sheriffs. Though highly sensationalized, reports of Claire’s dangerous work with criminals in the county jail show how a woman serving as a deputy sheriff was viewed as truly wild and unheard of. One report told of how Claire was guarding a burglar known as “Handsome Gray” in the county jail when he somehow picked the lock on his handcuffs. Upon hearing the handcuffs drop to the ground, Claire instantly reached for her revolver, pointed it at the prisoner and called out, “If you take another step, I’ll shoot.” In yet another nod to her mother, it was reported that “it was while assisting her mother in the operating room that [Claire] acquired the nerve which now stands her in such good stead.”[5]

During her tenure as deputy sheriff, Claire was active in politics in Salt Lake. She vigorously supported the Democratic party and gave political speeches across the Wasatch Front. She even met the 1896 presidential nominee, William Jennings Bryan, when he came to Salt Lake City to campaign for fellow Democrats in 1897. Like the rest of the nation, it seemed, Bryan also was very interested in the information that “Salt Lake ladies served as peace officers.”[6] 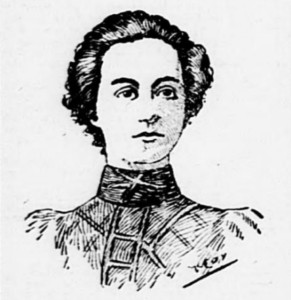 She was a member of the Red Cross Society of Utah when it was organized in 1898, and also applied for a nursing commission during the Spanish-American War. The Red Cross Society helped to provide food and clothing for soldiers stationed at Fort Douglas, as well as sending bandages and other first aid items to the field.

After serving as deputy sheriff, Claire moved to New York City with her mother. She married Wilbur Stocker Wright in 1905 and gave birth to two children, the first of whom died in infancy. Though official records indicate that Claire legally divorced Wright in 1920, census records imply that Claire raised her daughter, Ellen Pauline, as a single mother during her daughter’s formative years, in addition to caring for her aging mother and working as a stenographer. She later married Robert Seeman, an immigrant from eastern Europe. Claire died in September 1944.