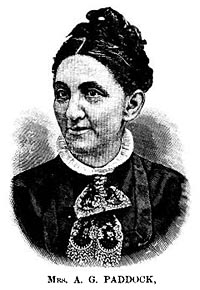 Cornelia Paddock was an early leader of the anti-polygamy movement in Utah Territory. Cornelia was born in New York in 1840 and moved to Salt Lake City with her husband in 1870. Frustrated with the difficulty she and her husband faced in finding good work and opportunities in Utah as “Gentiles,” she became involved in political matters to oppose the political dominance of Latter-day Saints in the territory. In 1872, she led over 400 women in petitioning the Vice President to oppose Utah statehood due to polygamy and Latter-day Saints’ political power.

Cornelia helped form the Utah Ladies’ Anti-Polygamy Society in 1878, where she served as the secretary and often spoke at public meetings. Writing was her political weapon of choice to both educate the rest of the country about polygamy and persuade Congress to pass stricter anti-polygamy legislation. Cornelia often wrote for the Anti-Polygamy Society’s newspaper The Anti-Polygamy Standard, and she authored two fiction books about women in Utah. Both books, Madame La Tour and In the Toils, were about women who endured hardships due to the Latter-day Saint influence in Utah. The books were widely popular, and she became beloved by those sympathetic to her cause, but disliked by most of the Latter-day Saint population of Utah. She also had a difficult relationship with the Salt Lake Tribune, whose editors believed she was actually too sympathetic to Latter-day Saint women.

Cornelia was a member of the National Woman Suffrage Association (NWSA), but she lost her membership in the Association when she helped circulate petitions to disenfranchise all Utah women until polygamy could be eradicated. After Utah women lost the right to vote in 1887, she joined the more conservative American Woman Suffrage Association when NWSA admitted polygamous Latter-day Saint suffragists as members. The Latter-day Saint church officially ended the practice of polygamy in 1890, but Cornelia did not join the Utah Woman Suffrage Association as many non-Latter-day Saint women did at the time. In fact, Cornelia and a few other women gathered thousands of signatures on petitions to the 1895 Utah constitutional convention to leave women’s suffrage rights out of the constitution. Instead, they wanted the issue put to a popular vote after statehood. Their effort failed, and Utah entered the Union as the 3rd equal suffrage state in 1896.

During her life, Cornelia also opened and became the president and spokesperson of the Woman’s Home Association in 1894. Her goal was to help find homes and jobs for women who had previously been involved in prostitution. The organization hoped to give these women the opportunity to reform and improve their lives, but it had a difficult time finding a place to house these women, and an even more difficult time finding employers willing to give these women work. Nonetheless, Cornelia helped many women gain employment and improve their living situations until her death in 1898.