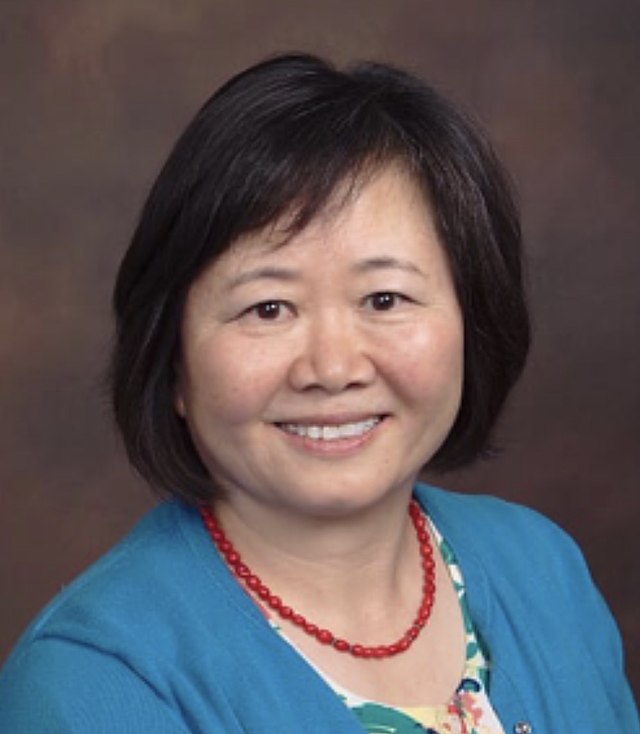 Shuping “Sunshine” Wang was a remarkable woman, loved and admired for her bright personality, charity, and dedication to her vocation as a physician. She lost her first marriage, countless career opportunities, and her home due to her efforts as a whistleblower to prevent and contain an HIV outbreak in China. But she stood up for what she knew was right and never wavered. Dr. Wang and a few other brave people saved hundreds of thousands of lives. After making her home in Utah, Dr. Wang developed new solutions to health issues plaguing the US, China, and the world.

Dr. Wang was born Zou Shuping in Henan, China. Her mother was a village doctor and her father was a math teacher who had previously served in the Chinese army while it was ruled by Chiang Kai-shek’s Nationalist Party. Because of this, his family was ostracized and threatened after the Communist Party took over and founded the People’s Republic of China in 1949. Shuping was expelled from primary school at age 8 for refusing to disown her parents. Undeterred, she sat on a tree outside the school window and did her homework until her peers and teachers noticed and closed the blinds. To continue her schooling, Shuping was adopted by her uncle, a Communist Party member in a nearby town, and took her adopted father’s surname, Wang.

Following her mother’s footsteps, Shuping graduated from Henan Medical College with an emphasis in infectious diseases in 1983. She began researching, diagnosing, and treating hepatitis. In 1988, Shuping took a course in field epidemiology in Beijing that the U.S. Centers for Disease Control offered together with a team of Chinese physicians. This additional training in research methods proved to be invaluable when she was assigned to oversee for-profit plasma collection at a center in Zhoukou, China.

While blood donors were tested for hepatitis B, Dr. Wang was surprised by the lack of hepatitis C testing and decided to do her own research. She found the rates of hepatitis C far too concerning to ignore, and recognized that this meant there was cross-contamination in the clinics. She soon discovered that some local blood banks segregated donors by blood type, centrifuged the blood plasma blood together, and then pumped the contaminated blood back into the clients. This method, though efficient and inexpensive, was also a very easy way to share infections among blood sellers. Some other collection centers failed to clean plastic tubing and equipment between each donor. This put the blood sellers at intense risk. 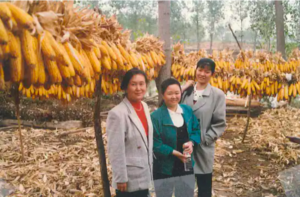 When Dr. Wang informed clinic leaders of her research and concerns, they ignored her and refused to change these dangerous practices due to cost. Nonetheless, she persisted. Frustrated by regional authorities, Shuping took her safety recommendations directly to the PRC Ministry of Health in 1992. With the support of Dr. Yang Dongming, Dr. Wang was able to get the Ministry of Health to only accept healthy clients’ blood for purchase. However, she paid a high price for her refusal to stay silent. She lost her job at the collection center, but other doctors intervened to get her hired by the Office of Medical Affairs in the Henan Health Bureau.

After the Ministry of Health required screening for hepatitis C, the Health Bureau allowed Dr. Wang and several colleagues to investigate 17 plasma stations in Zhoukou district, Henan, China. What they discovered was even worse than Dr. Wang’s initial findings – out of 20,000 donors, 45% had positive hepatitis C antibody results and were ineligible to sell their blood. Results were similar elsewhere.

Aware that hepatitis C and HIV were both blood-transmitted viruses, Dr. Wang knew that an HIV/AIDS outbreak was inevitable if the plasma collection centers continued their unethical practices. She opened a study center to monitor quality control on blood safety practices in hospitals and collection clinics. Dr. Wang used her own savings to do this life-saving research because the government refused to provide funding.

At this time, there were no HIV screenings that prevented HIV-positive people from selling their blood. When Dr. Wang found that a man who had tested positive for HIV at one blood station had later sold blood in three different counties, she immediately asked the Office of Medical Affairs to incorporate HIV testing as part of the screening process to prevent an HIV epidemic. Once again, she was told that testing would be too expensive. Dr. Wang used her own money to buy test kits and collected random samples, finding a 13% positivity rate for HIV. Transfusions or plasma made from this blood could infect hospital patients.

Dr. Wang brought these results to the head of the Health Bureau, who brushed her off and questioned her results. But she didn’t let that stop her. She submitted a written report and brought her HIV-positive samples to the Institute of Virology, Chinese Academy of Preventative Medicine in Beijing. They turned her away, and she was unable to pay to corroborate her testing because she had already spent all her savings on research equipment. Fortunately, President Zeng Yi – chair of the PRC National Committee on HIV/AIDS and the Director of the Academy of Virology – ordered that his researchers test sixteen of Dr. Wang’s samples. Thirteen came back as positive with the other three as uncertain but likely to be positive.

When Dr. Wang returned from Beijing, the Director of the Regional Health Bureau scheduled a briefing with her. When she showed up, she was pushed out of the meeting and told to come back later. When she returned, Dr. Wang was verbally assaulted by many of the Bureau directors. They insisted she remove the part of her report about the local director refusing to take action. They asked why she had found HIV in blood samples when nobody else had.=

What was Dr. Wang’s response? She refused to alter her report and urged officials to visit plasma stations to see how people were being infected with hepatitis C and HIV. She made it clear that patients in local hospitals were being infected with blood obtained from these collection centers. Local health authorities sent a former Health Bureau leader to threaten her and destroy her equipment, and when Dr. Wang tried to protect her testing center, he hit her. When Dr. Wang called the police and reported the abuse, she was turned away.

In the end, Dr. Wang’s insistence paid off. At the beginning of 1996, the central government of Beijing authorized arresting blood bank leaders, shutting collection centers down, and requiring HIV testing when they reopened. But even while acting on her research, government and health organizations still punished Dr. Wang for her refusal to ignore the epidemic. Health officials called her out for putting their jobs at risk, instead of praising her for saving lives. They closed down her testing clinic later that year. Despite her ill treatment and loss of pay, Dr. Wang continued to treat patients in the countryside until the Health Bureau shut down her access to equipment. She was fired and told to go home and take care of her husband and daughter. 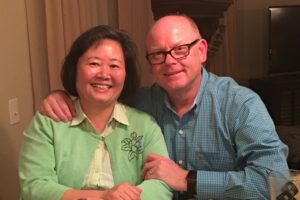 Mounting pressure from leadership made staying in China dangerous, so Dr. Wang moved to Wisconsin in 2001 to work at the Blood Institute in Milwaukee. That same year, the Chinese government finally admitted that 500,000 people, most of them working-class, had been infected with HIV and hepatitis C by selling and receiving blood from for-profit blood centers. Some had unknowingly infected family members during the years when the HIV epidemic was kept secret.

Dr. Wang met her second husband, Gary Christensen, in Wisconsin. Eventually, her daughter from her first marriage, Samantha Geng, joined them in the United States. She and Gary also successfully adopted Shuping’s niece and nephew, Julie Bingbing Zou and David Zou. With Gary and her children’s support, Shuping accepted a job at the University of Utah in 2005, working in several scientific research departments. Starting in the spring of 2018, she was the main researcher running essential studies in the Precision Therapeutics Lab. Dr. Wang worked diligently, efficiently, and with a joyful disposition. Some of her co-workers did not hear about her whistleblowing in China until her death. She had to teach herself English as an adult, learn how to live in an entirely different culture, and engage with new forms of research. She faced all these difficulties with her optimistic spirit. 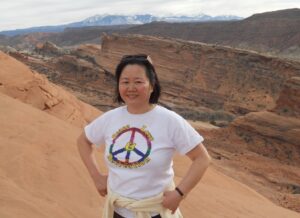 Dr. Wang is a hero to many in the health field. She always worked to serve the Chinese people, even from faraway Utah. She often worked on research affecting people of East Asian descent, knowing the positive impact her diligence and determination could make. This sense of caring translated into her home life – she spent her free time teaching her dog Bagel and cat Billy tricks, painting, and enjoying time with friends and family. Her nickname “Sunshine” characterized her sunny personality, her bright outlook on life, and her empathy for others. She lived an active lifestyle with her friends and family, enthusiastically trekking the mountains near her Salt Lake City home. She died on one of those hikes at age 59, on September 21, 2019.

Shuping “Sunshine” Wang’s legacy lives on through her tireless research, her three adult children, her husband Gary, a play written by Frances Ya-Chu Cowhig titled “The King of Hell’s Palace,” and the countless medical researchers and health professionals inspired by her fearless example.

Dr. Shuping Wang stood up for what she knew was right and never wavered. When local officials resisted her, she did what was necessary to share information and save many lives. And even when Chinese officials threatened her family and friends in China for speaking about the AIDS crisis from the U.S., she persisted. She believed that speaking out is the greatest power each of us have to make change.

Maya Brimhall wrote this biography as a BYU History and Global Women’s Studies student. From Mesa, Arizona, she loves socializing, studying women’s history, and eating all types of sweet treats.