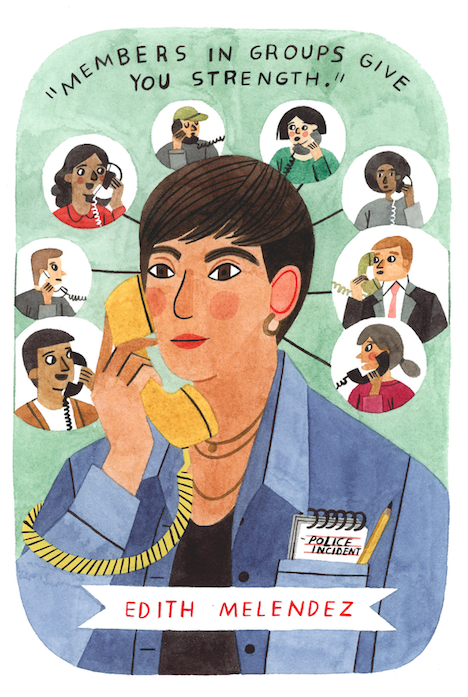 “Members in groups give you strength.”

Edith Melendez was a fearless leader with a soft heart who sought justice and equity for all people, but especially for the Utah Latinx community. Edith was born on Valentine’s Day in 1925 to Mexican immigrants Nicolas and Desideria Santiago Roblez in Sargenton, Colorado, and grew up in a home where she was taught to be proud of her Mexican heritage and culture. When Edith was two months old, the family moved to Bingham Canyon, Utah, so that her father could work in the mines. However, her father developed miners’ consumption and had to seek other employment. Edith’s mother, Desideria, then opened and ran a boarding house for Mexican miners as a way to supplement the family income.

Shy and introverted as a child, Edith was encouraged by her sixth grade teacher, Miss Ivy. “I know you’re shy and introverted,” Miss Ivy said, “But I know you can do a lot better if you apply yourself.” Edith later commented, “Her encouragement helped me to have more confidence in myself and be able to progress and do well.”[1] After graduating from high school, Edith worked at the Kennecott Copper Mine as a flag woman and switch tender. This newfound freedom and money had an impact on Edith. She explored Salt Lake City, bought new clothes for herself, and attended parties and dances. 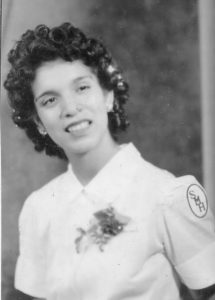 Edith in nursing school. Courtesy of the Melendez family.

Edith entered the Cadet Nurse program at the University of Utah, a government-subsidized program during World War II. She said, “I always liked nursing. I always thought it was something that you were helping people. And I thought here was something you could help people and I had good relationships. I mingled well with people.”[2] While enrolled in the program, Edith met Gerardo Melendez, a Puerto Rican miner who was boarding at her mother’s. They married on January 19, 1946, in Bingham Canyon. They would have and raise five children.

The course of Edith’s work life changed when her father was paralyzed in an accident while at work. He was sent to San Francisco for medical treatment, so Edith quit nursing school and left her husband and young child in Utah to care, advocate, and translate for her Spanish-speaking father. While in San Francisco, she worked at the Southern Pacific Hospital, where her father was receiving treatments, as a licensed practical nurse. Eventually, her father was well enough to return to Utah. 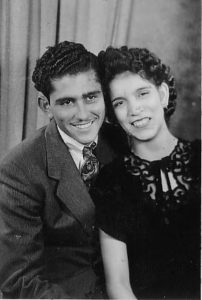 Edith and Gerardo Melendez in their engagement photo. Courtesy of the Melendez family.

In 1955, Edith, her husband, and their children moved from Bingham Canyon to Midvale. While Edith loved their new home, she found the neighborhood unwelcoming, facing discrimination and prejudice. As a way to build bridges and to protect her children from discrimination, Edith decided to join the PTA. “I wanted to be involved in things, see how I could help my children, and how I could make them [the PTA] aware of the needs of the Hispanic.”[3] Edith served as the PTA’s translator and interpreter. She also got involved in her local Roman Catholic Church parish and with the Cub Scouts, Little League, and the Utah Democratic Party. She said, “I had always been involved basically in getting people to vote and these different people who were running [for office] would call me and ask me to contact people. As a translator. Do different writeups for them.”[4]

During the Kennecott Copper Mine strike in 1967, Edith sought work elsewhere and took a position with the Department of Contractors as a receptionist. She eventually worked in various capacities in the department and helped compose the Minority Contractor List in an effort to diversify the contractors hired in the state. In 1975, she was appointed to the Board of Contractors as the first woman appointed, and she served in this capacity until 1982. Edith later took a position with the Department of Social Services in the food stamp program as a liaison for the state as an Outreach Worker. She traveled around Utah working with people in need of government assistance. Edith also served on the Utah State Mental Health Board and volunteered as an interpreter in the court system.

Some of Edith’s most influential work came from her volunteer involvement with the SOCIO organization (Spanish-Speaking Organization for Community, Integrity, and Opportunity). Many societies and organizations existed in Utah to preserve Hispanic cultural traditions and to provide social opportunities; however, none of these organizations actively lobbied for civil rights. In December 1967, more than 150 people concerned with improving economic and social equality for Hispanics in Utah held a meeting at the Guadalupe Center in Salt Lake City. They launched SOCIO, an organization with the mission to “act consistently and lawfully to establish and maintain justice in all areas affecting the well being of the Spanish-speaking person and community…Members pledged to work at the grassroots level for improved conditions in employment, education, and social welfare.”[5] During the 1970s, SOCIO served as an important voice in representing “the concerns, complaints, and hopes of Spanish-surnamed people of Utah to political, business, educational, and religious leaders.”[6] 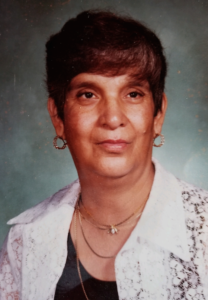 Edith served as the vice president of state SOCIO in social action from 1974 to 1980, overseeing advocacy work with the police force, housing, and welfare. Through her efforts, the organization decreased the height requirement for police officers, which led to increasing the number of Hispanics working in law enforcement. She and others also worked with Governor Cal Rampton to create a Chicano ombudsman office, helped start the Minority Advisory Board, and coordinated and developed cultural awareness programs in different departments across the state, including the police department and schools. Edith was always attending or leading meetings and organizing other volunteers via the phone. Friends of friends would frequently call Edith to let her know about a cause or incident that needed her attention and support. Fighting against police brutality, combating Latino/a students’ high expulsion rates, advocating for young people to attend medical or law school, and fighting for women’s rights were a few of Edith’s passions. 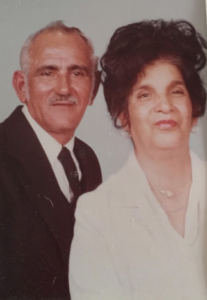 Geraldo and Edith Melendez in the 1970s. Courtesy of the Melendez family.

Her daughter, Rosa, recalled, “I remember Governor Rampton calling my mom at home while we were making tamales, and she refused to take the call because we were busy. She said that she’d call him back in an hour. I was stunned because it was the Governor calling, but she told me that he was just like the rest of us. He could wait. She didn’t see herself as better or less than anyone.”[7] Edith was not afraid to meet with powerful people; titles and degrees did not intimidate her. She was also known for her colorful language to stress a point or show her enthusiasm.

Edith served on the Governor’s Hispanic Council under Governor Scott Matheson and was recognized by him as one of the outstanding civic leaders in the state. Her reach really extended to all. She said, “I have always been for the person who can’t represent himself because of lack of education. Lack of knowing of English. Lack of knowing how to and where to go.”[8]

Edith died on January 21, 1990. Activist Gloria Steinem wrote that “every social justice movement that I know of has come out of people sitting in small groups, telling their life stories, and discovering that other people have shared similar experiences.” Tenacious and persisting, Edith not only had a clear vision of what justice was supposed to look like and how justice should be, but she believed in the power and effectiveness of grassroots efforts. She took the time to have open dialogue with others and to learn their stories.