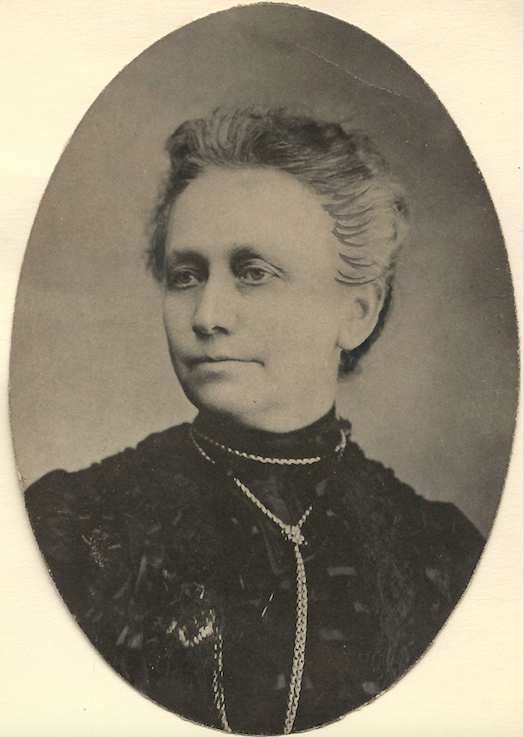 In 1919, when most women across the United States didn’t even have the right to vote, Elizabeth Ann Pugsley Hayward stood as an elected member of the Utah State Senate and introduced the resolution to ratify the 19th Amendment—The Susan B. Anthony Bill—that would make it illegal to prohibit voting rights on the basis of gender. Elizabeth Hayward served in many public offices throughout her life, and provided valuable service to her fellow citizens as well as to her family and friends. 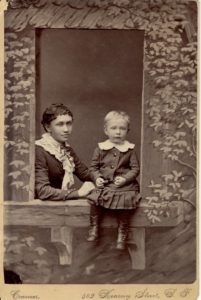 Elizabeth with her son Philip in the early 1880s. Courtesy of Emily Wessman.

Elizabeth was born in Salt Lake City, Utah, December 23, 1854, the eldest daughter of Philip and Martha Roach Pugsley. Her early life, while one of sacrifice and hardship, was nevertheless a happy one. Being the oldest girl, Elizabeth did not have the opportunity for much schooling. Her time was spent in helping her mother raise the family, including two sets of twins. She helped make tallow candles, and with the carding, spinning, and dyeing of wool for cloth. As a young girl she learned the art of dressmaking, and for many years made all the clothing worn by both the men and women of the family.

On Elizabeth’s 21st birthday, she married Henry J. Hayward and they moved into a little two-room adobe house in Salt Lake that he had built. Of the nine children born to Elizabeth and Henry, only three survived to maturity: Jean, Elizabeth, and John. 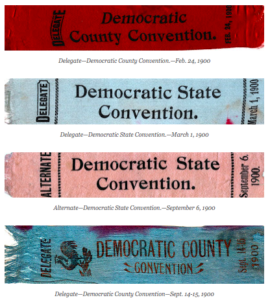 At the age of fifty, Elizabeth began a highly visible career in public service. One of the reasons she gave for this interest was the deaths of her children. Near the end of her life, she stated, “I had to keep myself busy. I’ve lived for fifty years looking forward and not backward. I tried to keep myself too busy to look back.”[1] Elizabeth served as President of the Mother’s Club (similar to today’s Parent-Teacher Organizations) at Washington School, was a member of the State Playground Board, championing the drive to put playgrounds in schools, and also served as a member of the Public Library Board for three years (1905–1907). 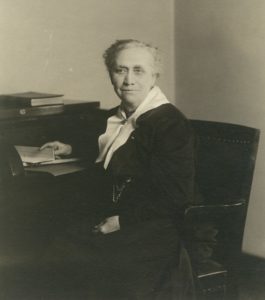 Elizabeth in the Utah Senate, courtesy of Emily Wessman.

Elizabeth was elected to the State House of Representatives in 1914, and was re-elected in 1916. During her time in the legislature, Elizabeth introduced measures to preserve the State Art Institute[3] and to create child labor laws in the state. Though women in Utah voted and could hold elected office, there were still many states without equal suffrage laws. Elizabeth worked with the national suffrage movement to ensure that women across the country could enjoy the same rights she did. In 1915, she helped to plan and carry out a mass suffrage meeting in Salt Lake City to welcome national suffrage leader, Alice Paul, president of the National Congressional Union, later known as the National Woman’s Party.[4] In 1918, Elizabeth was elected as a State Senator, and several times was afforded the privilege of presiding over the State Senate, probably one of the first woman in the history of American politics to do so. Elizabeth had the great honor of introducing the resolution to ratify the 19th Amendment to the Constitution to the Utah State Senate in September 1919.[5]

Elizabeth was also a respected member and officer of the Daughters of Utah Pioneers. She joined the organization in 1907 and held many positions, eventually serving as the eleventh president during the years 1917–1921.

Elizabeth died January 27, 1942, at the age of eighty-seven, ending a life of useful service to her community, beloved by her family and all who knew her.

Amy Tanner Thiriot is an independent historian and author of the forthcoming book, Slaves in Zion: African American Servitude in Utah Territory. She is a descendant of Elizabeth Pugsley Hayward. We thank Emily Wessman and Toni Binkerd Wyeth, also relatives of Elizabeth’s, for sharing materials and photos.