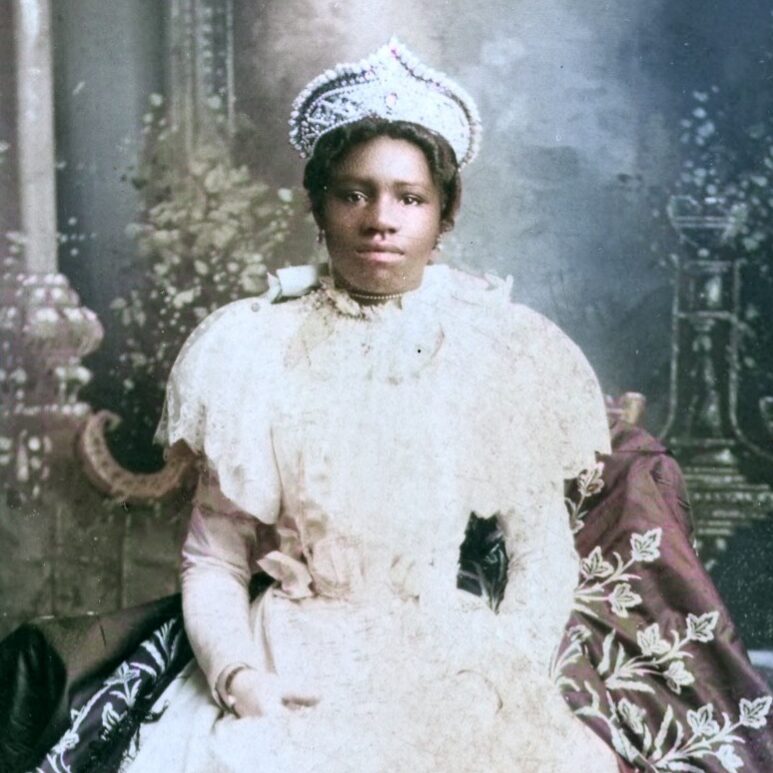 Elnora M. J. Dudley was the only child of Willis and Mary Ella Dudley. She was born in Tennessee in 1883 and came to Salt Lake City with her parents when she was 8 years old, about 1892. Her father worked as a porter while her mother ran a small boarding house and worked as a maid in various hotels.

As a teenager, Elnora was known as a talented pianist and often played at community celebrations and weddings. At 15, she was crowned the Queen of Salt Lake City’s Emancipation Day Celebration of 1898.

The 1898 Emancipation Day celebration took place on September 22, the 36th anniversary of President Lincoln’s initial Emancipation Proclamation. The celebration included a parade through the streets of Salt Lake City, a banquet, speeches, music, and more. Elnora was dressed in a white silk gown and a crown of pearls adorned her head. She rode in the head carriage of the parade and then expressed thankfulness toward Abraham Lincoln and read the Emancipation Proclamation

As a single Black woman, Elnora purchased and owned her own home during the Great Depression and beyond. Her neighborhood was identified as a “hazardous area” (aka Redlined neighborhood) by the Federal Home Loan Bank Board (FHLBB) which meant she was unlikely to be able to buy, or even rent, a home east of 500 East in Salt Lake City.

At the time of Elnora’s death in 1956, at the age of 73, she worked for the Salt Lake County Club as a decorator and continued renting the extra rooms of her house. After her death, her home and all the contents, including her beloved piano, were sold at auction to settle her estate.

The photograph of Elnora Dudley as Queen of the Emancipation Day celebration likely was sold off during her estate sale in 1956.  In the 1970s, the photograph ended up in an antique store in Salt Lake City where Jeffrey Ogden Johnson, then of the Utah State Archives, found it and purchased it. He then donated it to Helen Papanikolas, who edited the book The Peoples of Utah in 1976.  Although the photograph was never used in the book, it was part of the collection that Papanikoas donated to the Utah Division of State History. It was only labeled as “Elenora M. J. Dudley.” The black and white digital image was colorized by Rachel Quist.

Rachel Quist enjoys researching and sharing the history of Salt Lake City and Utah’s West Desert. She lives on a tiny urban farm near downtown Salt Lake and works as an archaeologist in the West Desert.  She finds the history of both places to be unique, tragic, and fascinating. You can find her work at @rachels_slc_history on Instagram or at www.slchistory.org