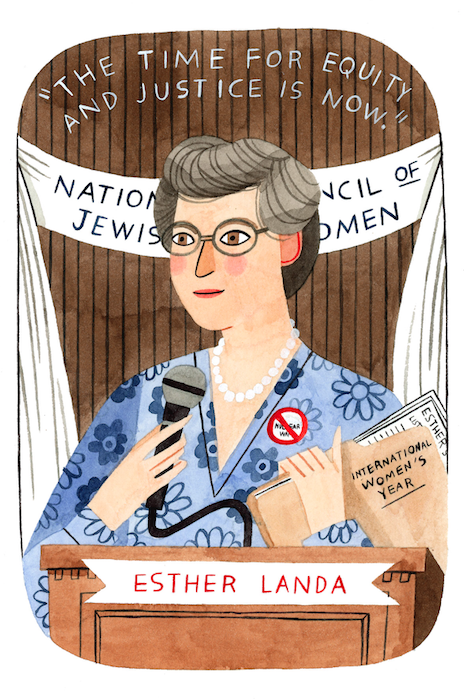 “The time for equity and justice is now.”

Incredibly witty and sharp with a no-nonsense style of speaking and a gift for diplomacy, Esther Landa was legendary and beloved in Utah as well as nationally and internationally for her efforts and involvement with women’s, children’s, and Jewish issues.

Esther Norma Rosenblatt was born on December 25, 1912, the first-born child of long-time Utah residents, Simon and Sylvia Rosenblatt. Raised with a strong belief in public and religious education, Esther graduated from East High School at age 16, having twice skipped a half grade. She also attended Jewish religious school. Esther then attended and graduated from Mills College, a women’s college in California, with bachelor’s and master’s degrees in English literature. Before she was allowed to graduate from Mills College, she had to pass a swimming test. She was very proud of meeting this requirement.[1] She said, “I had good female role models [at Mills]. You could be an achiever there.”[2] 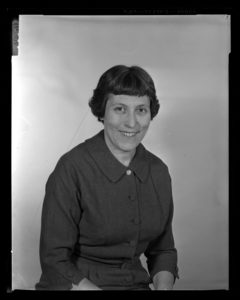 After doing public relations work for her college alma mater, Esther moved East to work at Bennington College in Vermont and later as an account executive for a public relations firm in New York City. However, after the bombing of Pearl Harbor and the United States entered World War II, Esther resigned from her job and moved to Washington D.C. to work as a mail sorter, stenographer, and information specialist for the Office of War Information. It was here that Esther met Jerry Landa, who was serving in the Army Air Corps. They married in September 1943 just before he was deployed to war. Their first child, Carol, was born the following year.

Once the war ended, Jerry’s firm sent the family to Tulsa, Oklahoma, where Esther became involved with many community service organizations, including the League of Women Voters, the American Association of University Women, and the Tulsa County Public Health Association. She also devoted herself to Jewish causes, particularly after the atrocities of the recent Holocaust of Jewish people in Europe. She fought against anti-Semitism, worked with Hadassah, a Jewish women’s philanthropic organization, and the United Jewish Appeal, and assumed leadership positions within the National Council of Jewish Women.

The death of Esther’s father brought the Landa family (now with an additional two children) to Salt Lake City in 1948, so they could be closer to family. Esther continued in her volunteer work with many of the same organizations, including becoming chapter president of Hadassah, assisting with the Salt Lake Jewish Welfare Fund, and becoming president of the League of Women Voters in Salt Lake City. She and Jerry were also founding members of the Mount Sinai Poker Club, “a group of lifelong friends who met every other Saturday night for dinner and cards. Both were avid golfers and tennis players, and Esther passionately enjoyed all sports (at least all of those that are competitive), watching college football and college and pro basketball…”[3] 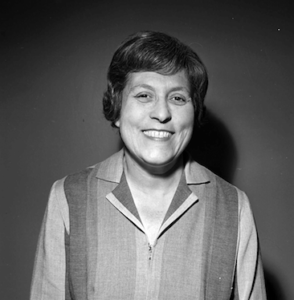 Esther decided to run for a position on the Salt Lake City school board in 1958. She ran a successful campaign out of her basement becoming only the second woman to be on the board. Her areas of focus included increasing monies to urban schools, increasing teacher salaries, decreasing class sizes, and expanding programming for adult education. She also fought against racial and religious bigotry and discrimination. Esther served two terms in this position before being elected twice to the Utah State Board of Education in 1970 and 1972. Her devotion to education extended to her co-founding the Utah Head Start Program, the first in the state, to help provide preschool education.

In 1961, President John F. Kennedy established the President’s Commission on the Status of Women with former First Lady Eleanor Roosevelt and Utah native Esther Peterson at the helm. This commission examined the social, economic, and legal status of women across the country and made recommendations based on the commission’s findings. States then set up their own commissions and forums to examine these issues at a state level; Esther Landa helped organize and co-directed Utah’s first statewide conference in 1962 and again in 1964.

In 1964, Esther also became the Director of Women’s Programs at the University of Utah’s Division of Continuing Education–a position she held for five years. In this position, she sought to prioritize an equal rights agenda by introducing humanities classes for women, organizing business management institutes for women, and chairing a committee that examined the status of women on campus. These findings and the committee’s work led to the creation of the University of Utah’s Women’s Resource Center. 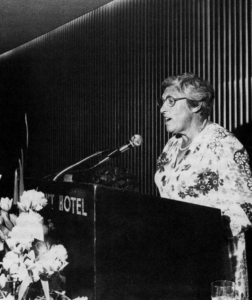 Esther Landa giving her acceptance speech as the newly elected president of the National Council of Jewish Women.

After Jerry’s death in 1971 and with her children fully grown, Esther broadened her work to a national scale. In 1975, after 29 years of volunteer work with the organization, she became president of the National Council of Jewish Women (NCJW), the oldest Jewish women’s volunteer organization in the United States that at the time had over 100,000 members in 200 locations.[4] “Inspired by Jewish values, NCJW strives for social justice by improving the quality of life for women, children, and families and by safeguarding individual rights and freedoms.”[5] During her presidency, Esther focused her attention to “the threat of nuclear war, overpopulation, pollution, and hunger. Esther recommitted the organization to justice for children and service to the aging”[6] and women’s rights. She traveled 100,000 miles meeting with local chapters around the country and maintaining contacts with influential people around the world, including developing a friendship with the Israeli Prime Minister Golda Meir.

Esther also strongly advocated for the ratification of the Equal Rights Amendment (ERA), unsuccessfully lobbying the Utah Legislature for its passage. She believed that women should have the “same choices and opportunities that men have.”[7] In 1977, Esther was asked to chair the Utah forum for International Women’s Year, a United Nations Initiative. This conference was in preparation for a national gathering later that year in Houston that would include delegates from all 50 states. Around 300 Utah women were expected to attend; however, more than 13,000 Utah women and children showed up, most of them members of The Church of Jesus Christ of Latter-day Saints and opposed to the Equal Rights Amendment (ERA). Despite their ideological differences, others observed that Esther remained fair minded and even tempered, adeptly handling the large crowd and gaining the respect of many of her more conservative peers.[8] Eileen Hallet Stone, NCJW Utah Section President, recalled, “Esther was a ‘Fair-Play’ gal who had respect for the equal treatment of everyone, and believed that equity was a person’s right.” She knew “how to listen for the common link between opposing views so ‘real’ discussion [could] take place.”[9] Although Esther was not elected to be a state delegate to the national convention, Esther did attend as a delegate at large due to her national reputation.

In the 1980s, Esther served on President Jimmy Carter’s Committee for the National Agenda for the Eighties. After this appointment, she continued her activism in Utah participating in Utahns Against a Nuclear Arms Race. She also served with other various organizations and committees: the Utah Domestic Violence Council, Equal Rights Coalition of Utah, National Organization of Women, Salt Lake Council of Women, Utah Women’s Forum, and Women’s Legal Defense Fund.

In her late 80s, Esther formed a PAC to support Democratic women candidates in Utah, called “Esther’s List.” She was also a mentor and supporter of many women. For example, former U.S. Congresswoman Karen Shepherd recalled she first met Esther when working as the editor of Network Magazine, a magazine for women that grew out of the conflict produced by the International Women’s Forum. “We wrote about women in the workplace, about women in poverty, about the relationships between men and women in a changing world both at home and at work. We had a special section about children, special editions about the nuclear arms race and peace, and an occasional focus on the environment. [Esther] was a constant contributor and supporter, frequently in and out of the office.”[10] Esther mentored Shepherd as a woman running first for the Utah Senate and then for the U. S. Congress. “She showed me how to work a room,” said Shepherd, “[and] introduced me to important people in Washington and was never afraid to tell me the truth about how I was doing…at the same time that she was completely supportive.”[11] Esther would also arrive each morning at campaign headquarters in her tennis shoes and flowered dress, announcing she was there to raise $500. A couple of hours later she would leave announcing that she was successful or had even raised $1000 that day.[12]

For her lifetime of work, Esther received numerous awards and honorary degrees from the University of Utah and Westminster College. Esther died at age 102, still with her great sense of humor and still attuned to national politics and her many causes. “Her memorial was jammed with folks from across the nation telling funny, heart-warming Esther stories, and nobody wanted it to stop. We laughed until we cried,” said Shepherd. “I still miss her. There has been no presence in this community that has replaced her.”[13]

[4] Robert A. Goldberg, “Esther Rosenblatt Landa: Her Price is Far Above Rubies,” in Worth Their Salt: Notable But Often Unnoted Women of Utah, edited by Colleen Whitley. Logan, UT: University of Utah Press, 1996. p. 236