Geneal Anderson, Leader of the Paiute Indian Tribe of Utah 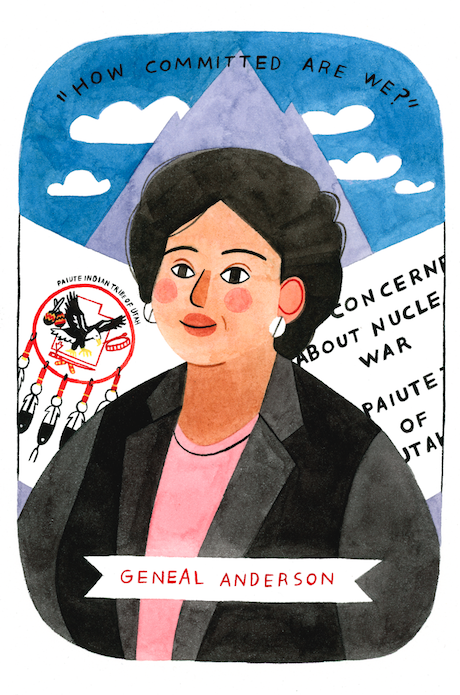 “How committed are we?”

Geneal Anderson was the epitome of leadership. She successfully ran the Paiute Indian Tribe of Utah tribe for decades in some capacity or another. To this day, tribal members walk into the council chambers and state how they will forever remember it for Geneal. Her spirit and dedication to the tribal membership illustrate how committed she was in devoting her life’s work to her people. She spent countless hours advocating for her Tribe and the tribal membership so they could receive the best quality of life that they deserved. 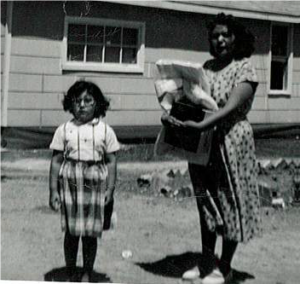 Geneal (left) as a child. Courtesy of Tamra Borchardt-Slayton.

Geneal was born in 1952 to Geneva Jake of the Indian Peaks Band of Paiutes and Kenneth Domingo Anderson of the Las Vegas Paiute Tribe. As a child, she lived in Cedar City, Utah and Las Vegas, Nevada. She was born right before the time of termination of the Paiute Tribe, and she was a toddler when the termination era and assimilation process for the tribe began. The Termination Era was a federal Indian policy that affected over 100 tribes throughout the United States from the mid 1940s through the mid 1960s. Tribes were denied official recognition, meaning that they were not identified as Federally Recognized Indians or as having a sovereign status. The belief that Native Americans should abandon their traditional lives and become “Americans” had been the basis of government policy for decades. This particular era’s policies cut tribal members off from all federal benefits, services, and economic support. They had to comply with criteria outlined by the Bureau of Indian Affairs, including: 1) acculturate into the dominant society, 2) be economically resourceful and self-supporting, 3) and be willing to withdraw themselves from government services.

On September 1, 1954, President Dwight Eisenhower signed Public Law 83-762, which put an end to federal supervision for the Paiute Bands, including the four Paiute Bands of Indian Peaks, Koosharem, Shivwits, and Kanosh. The Bands lost all federal recognition, the majority of their ancestral homelands, healthcare, culture, language, and identity. 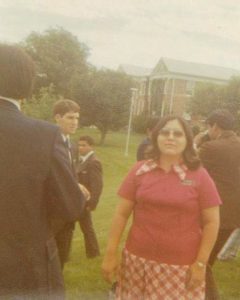 Geneal while serving a mission for The Church of Jesus Christ of Latter-day Saints. Courtesy of Tamra Borchardt-Slayton.

Geneal was raised during this time of rapid assimilation by not being labeled or considered a Native American and not having the rights to belong to a sovereign nation. Geneal graduated from Rancho High School in Las Vegas, Nevada in 1970, where she excelled academically and lettered in choir. She then attended Brigham Young University and received her degree in Administration Management. After graduation, she served a mission for the Church of Jesus Christ of Latter-day Saints in Rapid City, South Dakota. During this time in her life, she was unaware of the budding leadership skills that would blossom and turn her into one of the fiercest leaders the Paiute Indian Tribe of Utah has ever known. 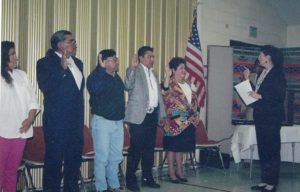 Geneal (just left of the U.S. flag) being sworn in as Tribal Chairperson. Courtesy of Tamra Borchardt-Slayton.

In March of 1984, Geneal became the Tribal Chairperson and held onto that position for a decade. During her time in office, she was very vocal and active on a local and national level. She sat on regional health and economic boards, the Governor’s Board of Division of Indian Affairs, and on boards to make sure that tribal needs were being met so that her people could prosper. 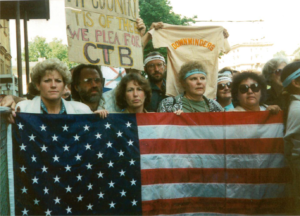 Geneal’s activism at this time was also focused on the issue of nuclear war and “downwinders.” Downwinders are individuals who live downwind of a nuclear test site or reactor where the risk of nuclear fallout is the greatest. Utah’s southwest region is known for the fallout due to the nuclear tests that occurred in the area beginning in 1951. The atomic tests were an attraction for families, including those of many tribal elders, who gathered to watch the mushroom-shaped clouds. The many years of testing created long-lasting health and environmental concerns, especially for downwinders. Geneal gave various interviews regarding the effects of nuclear testing, particularly how it affected tribal members and those in other tribes within the region. She also traveled to Russia with the group known as the Women’s International League for Peace to protest nuclear war and the investment of billions of dollars in developing the nuclear industry. Because of her ability to speak up, she made sure that the world knew that the Paiute Indian Tribe of Utah opposed nuclear war. 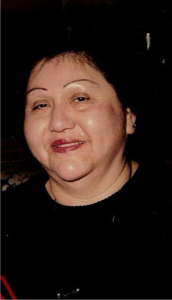 Geneal made many personal sacrifices and was very passionate in her work for the Paiute People. She worked tirelessly to make sure that her tribal members gained everything that was lost during termination including social and cultural programs. Geneal retired from office in 2001. In her farewell speech to tribal members, she reminded them of the flame that was in their souls that must not be blown out. She asked the membership, “How committed are we? Do we want to change and make a difference? I think we do!”

Geneal passed away in February of 2003. The Tribe lost a large part of its history and heart, and the light that Geneal spoke about in the souls of each tribal member dimmed. She was an extraordinary person who worked her hardest for her people and was incredibly committed to them. I often ponder on how Geneal would feel about the direction the Tribe has taken and how it stands today. Would she be proud of the Tribe that she helped build?

Tamra Borchardt-Slayton is the Chairperson of the Paiute Indian Tribe of Utah.