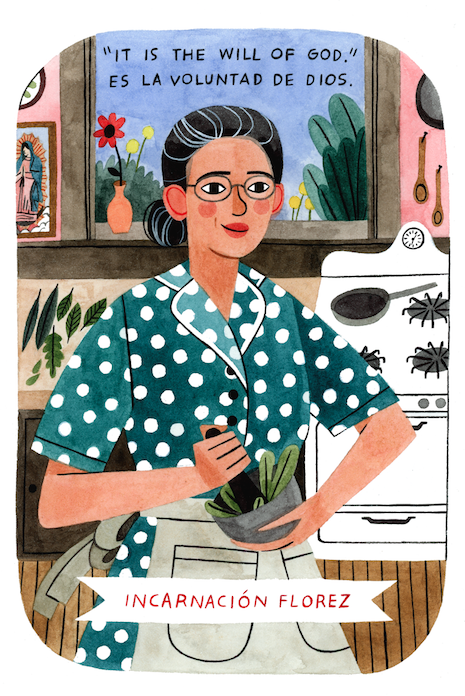 Incarnación Villareal Escobedo Florez (also known as “Chona”) was a curandera (female healer) who used alternative medicine, rituals, and beliefs to provide spiritual comfort and physical relief to many throughout the Intermountain region. She was born in Yucatan, Mexico to Ramón Villareal and Carnuta Escobedo near the end of the 19th Century. Shortly after her birth, the family moved to Fresnillo, Zacatecas located in north central Mexico where her father operated a cattle ranch. During the first eight years of her life, her childhood was very idyllic; she rode horses with her father and enjoyed watching him work on the ranch.

Although the details are unknown, it was during these years that she was introduced to curanderismo, a healing practice in Hispanic communities in the United States and in Central and South America, the Caribbean, and parts of Europe. “The origins of the curanderas date back to the origins of the Mexican culture: to the Aztecs who understood the uses of plants that grew around them and to the Spanish who introduced Catholicism and European methods of medicine.”[1] The skills of this alternative medicine were usually passed down from generation to generation from mother to daughter. Most curanderas, including Incarnación, combined a knowledge of herbal remedies with prayer and religious ritual.

In 1906, her family’s circumstances changed drastically when she watched Mexican President Porfirio Diaz’s troops murder her father. Incarnación’s mother, Carnuta, saved herself and the children by hiding under straw and manure. After burying her husband, Carnuta and her children took in laundry and sold tortillas to earn a livelihood, but their already dire situation worsened with the onset of the Mexican Revolution.

At age 15, Incarnación met Reyes Florez, and they married in 1911. Conditions continued to worsen, and Reyes had difficulty providing for their growing family. Within eight years, Incarnación gave birth to nine children, including two sets of twins. Even though she used her curandera skills, seven of the children died from a variety of diseases before the family left Mexico for the United States in 1920.

When Incarnación and Reyes first came to the United States with their two remaining children, they followed the ripening crops, finding work in Texas, Idaho, and rural Utah for several years. Eventually Reyes got a job with the Denver and Rio Grande Railroad as a traquero (track worker) in Salt Lake City. The family made their home in a boxcar provided by the railroad company on the west side of the city. It was subdivided into a kitchen and living quarters. Located a mere 20 feet from the railroad track, Incarnación fought a never-ending battle to keep their home spotless. She always had food on the stove for everyone who stopped by, inviting them to share tortillas and beans. She also planted and tended flowers, vegetables, and herbs. Her son, John, recalled cinders raining down on their yard every time a train passed by, but Incarnación’s garden flourished. She greeted each morning by picking up some earth and smelling it.[2] Her grandson, Gregory Florez, recalled, “She was peaceful. She had an almost zenlike approach to life. She lived totally in the present, and each chore she performed, whether it was sweeping or weeding, she was totally immersed in it.”[3]

Incarnación and Reyes stressed the importance of education with their children. When the kids faced teachers and peers who humiliated them for their culture, language, and customs, Incarnación taught them about Aztec history, culture, and art to instill in them a deep sense of pride and love for their Mexican heritage. Her children viewed her as an optimist who was buoyed by her Catholic faith. John shared that “we had to let her say a blessing over us if we wanted to travel as far away as Murray. If we were going to go to Ogden, we were on our knees for a long time while she prayed.”[4] 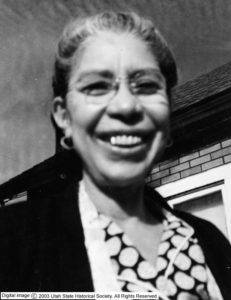 In addition to caring for her family and home, Incarnación used her healing practices to help those in need. “The curandera’s healing powers come from the Catholic religion’s belief in the power of God, and all cures and procedures are prefaced with the curandera’s and patient’s belief in prayer. Holy water is used, as are candles, oils and a variety of herbs with the curandera praying throughout the healing process.”[5] Incarnación’s skills must have been considerable given that people traveled as far away as Texas and Arizona in search of her cures and comfort. She encouraged her patients with serious illnesses to first seek a physician’s advice, and then, only treated them after they had found no relief or success. Since there were no Hispanic doctors in Utah until the mid-1970s, patients could get a diagnosis and antibiotics, but they came to Incarnación for familiarity, solace, and understanding. Consulting with anyone who needed her services, she accepted no money and only an occasional gift to help defray costs.[6]

Her son, John, wrote, “Cultures define what is an illness and what is a cure that is consistent with their cultural beliefs. She treated one child in a Mexican family that had refused physical therapy because they didn’t understand how it would help. Instead, they came to my mother who treated him by massaging his hand with holy oil and prayers, which the parents understood, and results much the same as physical therapy…The curandera’s success is based on the fundamental belief system that is an integral part of Mexican culture — God, the family and the curandera. Modern medicine is now recognizing what is a given in Mexican folk medicine: treat the whole person — mind, soul and body.”[7]

Patients generally would bring their family members to the healing, placing a lot of faith in Incarnación, the curandera. John continued, “The curandera involves the family that, in the Mexican culture, is more important than getting ahead…She always greeted them in a warm manner, offering them coffee and sweet bread. It was not uncommon for her to cook a meal if she knew they had traveled any great distance. After everyone was comfortable, she would let all the family members know that it was not she who would heal the patient but rather the patient’s faith, as well as the faith of all the family members — es la voluntad de Dios (it is the will of God).”[8]

Incarnación also worked tirelessly at Our Lady of Guadalupe Church and mission. “Be it for God,” Incarnación would say when she would hear of a tragedy, when someone in her family had pain or grief, or when she thought of the loss of her own children.[9] Gregory, her grandson, reminisced that “he knew her heart from the way she stroked his forehead and smiled into his face. And when he skinned his knee and she knelt beside him and covered his scrapes with rose petals and chanted something sweet and soft, then he felt her affection more deeply than ever. ‘I think she was a healer,’ he said.”[10] Incarnación continued healing until her death, providing love, comfort, and relief, reminding a community that both faith and hope are equally important.