Jane Manning James, Advocate for Equality in the Church of Jesus Christ 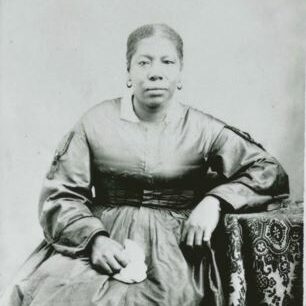 “I try…to set an example for all.”

Jane Manning James, known to those close to her as Aunt Jane, was one of the first documented African American women to enter Utah in 1847. Jane was a prominent and beloved figure in the Black community. Within the Mormon church, Jane was an active member of the Relief Society and featured in the early years of the influential Utah women’s newspaper, the Woman’s Exponent. During her lifetime, church policy restricted Black members from receiving the priesthood and having access to temple ordinances. Jane advocated to change this policy by repeatedly asking church leadership to make those ordinances available to her. Her life provides insight into Black Latter-Day Saints’ experience in Utah during the early years of Mormon settlement. Jane’s example of strong conviction to her faith still inspires members today.

Jane was born in 1822 to a free family in Connecticut at a time when many African Americans were living in slavery. Jane lived at her family home until her father’s death, which resulted in Jane going to work as a servant for the Fitch family. As Jane grew up, she was interested in religion and joined the New Canaan Congregational Church in 1841. The next year, Jane found what she was looking for spiritually in the Church of Jesus Christ of Latter-day Saints.

Following her conversion, Jane and her family wished to join the Latter-day Saints in Nauvoo, Illinois. They sold their property and sought passage on a boat from New York to Illinois. However, because of their race, they were refused passage on the boat. Instead, Jane and her family walked 800 miles to be with the Saints. When Jane arrived in Nauvoo, she began a close friendship with the prophet Joseph Smith and his wife Emma. She moved into the “Mansion House” to live and work for the Smith family. Jane developed a deep understanding of Mormon doctrine and a desire to participate in temple ordinances. 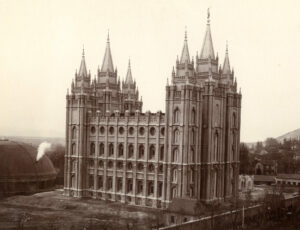 Salt Lake Temple in 1893, shortly after its dedication. Intellectual Reserve.

Along with the Saints, Jane and her family fled Nauvoo because of persecution and ultimately crossed the plains, reaching the Salt Lake valley in 1847. Jane and her family settled on a plot close to the Salt Lake Temple. Jane was extremely involved in the community of Salt Lake, where she contributed money to build the Salt Lake Temple and served in the Relief Society and the Young Ladies’ Retrenchment Society. Though Jane was an involved member of the Church, because of her race she was not permitted to enter the temple to receive ordinances. Jane appealed to leaders of the church to receive her temple endowment and sealing to her family but was only permitted to participate in baptisms inside the Salt Lake Temple during her lifetime.

Jane still remained an active member of the Church and was a leader in the African American community in Utah. Jane was very vocal in the Relief Society, and she is recorded in the meeting minutes as declaring her belief in church doctrine despite her inability to fully participate in all the ordinances it had to offer. Jane also participated politically in her community. At a Ladies Democratic Club meeting in 1903, she and her husband were given silk umbrellas as a prize for being the oldest couple there. Jane’s political involvement helped create space for African Americans’ participation in Utah politics. 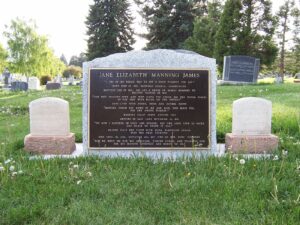 Jane died at the age of 85 on April 16th, 1908. Her influence on her community was exhibited from the large attendance at her funeral that brought out many Saints, both Black and White, who were touched by her example of devotion to her faith. Jane Manning James truly was an example to Utahns past and present of advocating for equality. Her legacy challenges us all to promote inclusion in everyday life.

Grace Chipman is a Junior studying History, with a minor in Global Women’s Studies at Brigham Young University. She hopes to continue her education in getting her PhD. and returning to BYU to teach women’s history courses.