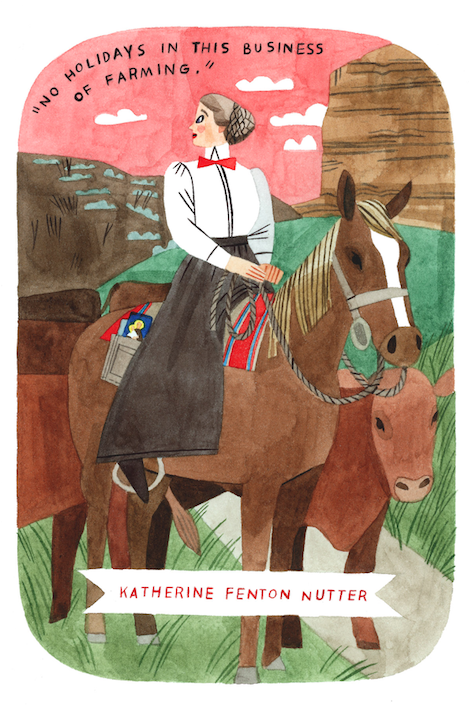 “No holidays in this business of farming.”

Later known as “Utah’s Cattle Queen,” Katherine Fenton was born on March 12, 1871 in Ceylon, Ohio, to Maurice and Catherine Morgan Fenton. Katherine attended school at Sisters of the Holy Cross School in South Bend, Indiana, before heading west to Colorado Springs to work for the telegraph, eventually managing the Postal Telegraph Company office there during the Cripple Creek mining boom. 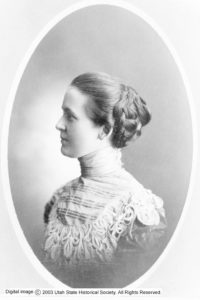 When the Ute land was opened for white settlement with the Homestead Act in 1905, Katherine and several other young women entered their names in the lottery, and her name was picked. She was deeded a homestead of 160 acres in Ioka, Duchesne County, and was required to live on this land in the Uintah Basin for an allotted number of days each year and to work to improve it. Against the advice of many friends, she traveled from Colorado Springs by stagecoach to visit her new homestead. The new-to-the-job stagecoach driver missed the regular overnight stop, mistaking the ranch house of Preston Nutter in Nine Mile Canyon, just north of Price, Utah, as their destination. Mr. Nutter, a 58-year-old self-proclaimed bachelor, owned a vast cattle operation stretching through large amounts of Utah and Arizona. Katherine had to stay overnight at Nutter’s ranch, and a romance soon blossomed. One of their two daughters said that her mother was a woman “clever enough to outmaneuver him.”[1]

Even though Preston proposed to Katherine the next year, she wanted to improve her homestead and cultivate the land. She continued to run the telegraph office in Colorado Springs for three more years, also spending the time required by law on her homestead and traveling to the Nutter Ranch. In 1908, Preston and Katherine married. Part of their honeymoon consisted of cattle buying in the East. A daughter, Catharine, was born in 1909, and a second daughter, Virginia, was born in 1912. 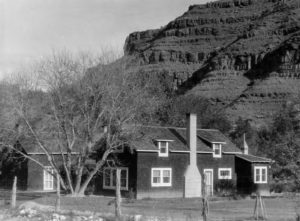 Katherine learned large-scale cattle ranching from Preston. She also kept the account books and wrote the checks. Ranching was hard work. There were never vacations and livelihood was dependent on weather and cattle prices. Preston was also often gone for long periods of time, traveling across their 300,000 acres of land, taking care of livestock, and managing ranch hands and workers. During World War I, Katherine, plagued by a goiter that developed after living in Nine Mile Canyon for several years, was forced to go to Chicago to seek treatment for a year. When she returned in the spring of 1920, she and her daughters moved to Salt Lake City instead of the Nine Mile Ranch. Catharine and Virginia attended St. Mary’s of the Wasatch, a Catholic school for girls.

Today, many may think today that those in the West were antagonistic towards federal government control of land. However, experienced, seasoned cattle ranchers, like the Nutters, felt that some kind of regulation was necessary. “During the decades [of ranching] there had been a steady encroachment of sheep on the grazing lands of the West. Whereas the cattle operators were more or less stabilized and kept their livestock near their holdings, the sheepmen were migratory. Bands of sheep had a way of appearing wherever the feed was good regardless of who held title to the land or who had a priority of use. It was not unusual for [Preston] Nutter to find a band of sheep in the lush mountain pastures of his fee land…On one occasion he found his own land and a water tank fenced against his own cattle. Crazed cows were pawing the ground where a trickle of water had made a damp spot. Some were already dead, their calves bawling piteously at their side. Inside the fence was a band of sheep.”[2] Both Katherine and her husband supported the Taylor Grazing Act of 1934 that stipulated regulation of grazing on public lands to improve rangeland conditions and regulate their use. 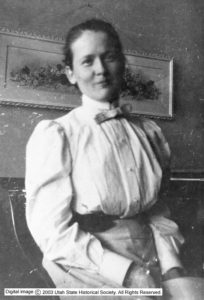 Two years later, in 1936, Preston passed away, and Katherine assumed the position of president of the Nutter Ranch Corporation and oversaw ranching operations. Her daybooks and notebooks show meticulous attention to the weather, her livestock and employees, and pleasure in visitors who stopped by the ranch. In 1949 a reporter met “the 78-year-old rancher [Katherine] at Mounds, Emery County, at the end of the fall cattle drive. She was there at the railhead to inspect her stock before it was loaded on cattle cars for shipment to market on the Denver & Rio Grande Western Railroad, and [the reporter] wrote, ‘She pronounced the condition of the grass-fat animals to be excellent.’ She called the life of a rancher ‘one demanding a great amount of self-denial from those who would follow it and was strong in her praise of the men who handle her stock’… She told of the heroic night-and-day struggle of the past winter to keep the cattle alive during… the deep snow and cold weather.”[3]

Katherine also apparently never forgot her telegraph skills. “On one occasion when she was ordering railroad cattle cars, a friend recalled, ‘She overheard the telegrapher rattling off an order for the cars in [Morse] code, stopped him and said, ‘I ordered cattle cars, not sheep cars.’ The surprised telegrapher realized she had read his message as fast as he sent it and had caught the error.”[4]

A member of the American Cattleman’s Association, Katherine was an early adviser to the Utah Big Game Control Commission. She was also very active in the Catholic Women’s League, attending social functions and mass at her local parish. Katherine died in 1965. “The ranch in Nine Mile Canyon is still an important historical landmark and was operated by the Nutter family until 1986 after which it was sold to the owners of the Sabine Corporation who to this day use Nine Mile Canyon as their ranching headquarters.”[5]