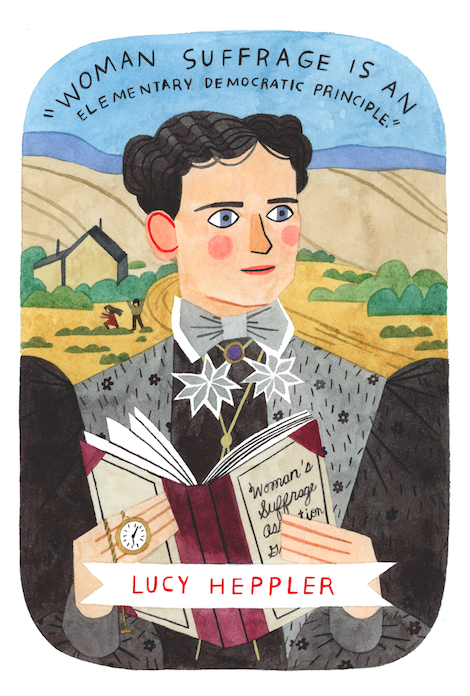 Like many nineteenth-century rural Utah suffragists, Louisiana Heppler is not known to her posterity specifically as an activist for the rights of women citizens. Memories written about her after her death mention her “civic activity” and “public work”, but there isn’t any specific acknowledgment of her efforts to establish and maintain equal rights for herself and the women of her community. Primarily, Louisiana, or Lucy as she was known, is revered as a mother and member of the LDS church. She raised 18 children, 7 of whom were adopted; she also served within her church as President of the Stake Primary Association (the organization for young children) for over 25 years, as well as in Relief Society (the organization for women) and the YLMIA (the organization for young women) presidencies. It is important, however, to add another dimension to her story. Lucy also worked hard throughout her adult life to further the cause of women’s rights in her small town of Glenwood–just a few miles outside of Richfield, Utah. 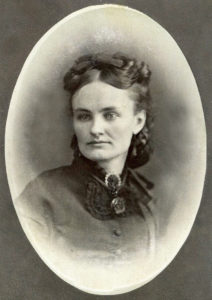 Lucy began working with the woman suffrage movement in the spring of 1890, when she became the vice president of the Sevier County Women Suffrage Association under the leadership of Alice Hoyt.[1] As part of her duties, she helped create city and town suffrage associations across Sevier county, including her own town of Glenwood. The minute book from the Glenwood Woman Suffrage Association (WSA) reveals the efforts of a small but dedicated group of women with Lucy at the helm. At the organizational meeting on April 12, she was chosen as the first president. Subsequent meeting minutes mention Lucy’s desire that more women, young and old, would join with them in the cause of suffrage and equal rights. It is interesting to note that meetings of the Glenwood WSA were attended by both men and women. Issues such as women’s wages, equal political rights, and women’s biblical history were lectured on by men and women alike. Men were also invited to participate in prayers and singing at the suffrage meetings, but membership and leadership were exclusively reserved for women.

Over the next 5 years, the Glenwood WSA was reorganized several times, but each time Lucy was chosen as president, and each time she was anxious to enlist more women in the cause. In 1894, the women of the association decided to organize classes to be held outside of the regular WSA meetings. Lucy was selected to teach a class on civil government, a position she was well qualified for as notes from the minute book confirm that she was knowledgeable in governmental procedures and organization. Lucy traveled to Salt Lake several times in the 1890’s, where she spoke at general Relief Society meetings, and, according to a family memory, she also met Susan B Anthony when Anthony travelled to Utah as part of the Rocky Mountain Suffrage Convention.

In the spring of 1895, a petition signed by 345 residents of Sevier county asked that women’s suffrage be included in the state constitution.[2] Given Lucy’s involvement in the Glenwood and Sevier County suffrage associations, it’s highly likely that Lucy was one of those petitioners. Later that year she was selected as 2nd vice president of the Sevier County Democratic Society, with a plank of their platform reading “We regard woman suffrage as an elementary Democratic principle”.[3] 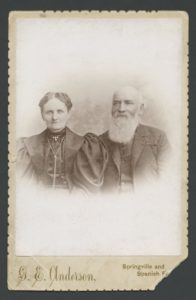 While the public record of Lucy’s activism into the 20th century is limited, her name does appear occasionally in local papers. When Richfield held a interfaith “Peace Meeting” in 1903, Lucy was selected as a speaker.[4] In 1905, Lucy “retired” from her service as Stake Primary president, and the children of the stake presented her with an autograph book as well as a gold watch in gratitude for her 25 years of service.[5] In 1916, Lucy was selected as honorary chairwoman of the Sevier County Chapter of the National Woman’s Party.[6] She also served as Chaplain of the local chapter of the Daughters of Utah Pioneers in Richfield, Utah until her passing in 1926.[7]

In her late seventies, Lucy indirectly influenced the story of suffrage in Utah one more time when the 19th Amendment was passed and ratified. Her son, Rep. John Heppler, was selected as chairman of the State House of Representatives for the special fall legislative session of 1919. Before the Susan B. Anthony Bill (the 19th Amendment) was presented for ratification, Rep. Heppler requested that fellow congresswoman Anna Piercey act as chairwoman instead of himself.[8] It’s hard to separate from that decision the influence on his life of an upbringing at the hands of his suffragist mother, Lucy Heppler.

When Lucy passed away in 1926, the following was written about her life: “Her work…is too well known to thousands to make it advisable to comment thereon.”[9] Her broad sphere of influence not only included family and friends, but her religious, social, and political communities as well. By adding her activism for women’s rights to her already long list of lifelong accomplishments, Lucy’s sphere of influence stretches well beyond her turn-of-the-century town of Glenwood to reach those who still celebrate that cause today.