As a young girl, Georgia Lathouris often headed into the mountains near her small Greek village to bring her father and brothers food as they worked the family’s goats. One day, a pregnant woman from the village called out to fourteen-year-old Georgia, asking for her help in delivering the baby. With the woman’s instructions, Georgia successfully delivered the woman’s child and began her long career as a midwife helping birth hundreds of babies in Utah. 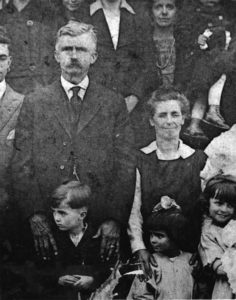 Nikos Mageras, an Austrian and Roman Catholic, arrived in town to build a bridge, and he met Georgia, a Greek Orthodox church goer. They married despite their religious differences and even though her family was too poor to provide a traditional dowry.  Georgia then became known as “Magerou.” Since Greece was in such financial and political turmoil during this time, Nick decided to travel to America in 1902 to earn money to support his family by working for the Santa Fe Railroad. With the influx of Greek immigrants who worked in Utah mines, Nick then moved and opened a boardinghouse in Snaketown, west of Magna, Utah. However, Nick faced opposition from powerful labor agents, and his boardinghouse was burned down twice. His savings was burned in this second fire just as Magerou and their children were traveling to Utah in 1909. When Magerou arrived, she became one of just 10 Greek women in Utah even though Greek men and boys were arriving in large numbers to work on the railroads and mines.

Living in a growing, bustling mining community meant that conditions were hard and diseases were plenty. Magerou was eager to help these sick men. At first, she would relay medical advice through her husband, but eventually she gained their trust. As these men married, Magerou’s midwife services were in great demand, especially since the women preferred her care to the mining company’s doctors. When a birth presented difficulties, she made sure to send for a physician, but she was also meticulous when it came to cleanliness and sanitation. Historian Helen Papanikolas wrote of Magerou’s work: “Small though she was, her voice carried through the neighborhoods, exhorting, shouting, ‘Scream! Push! You’ve got a baby in there, not a pea in a pod!’ Once the baby was born, Magerou gave her entire time to the newly delivered mother…From the backyard she chose the plumpest chicken, simmered broth, stood over the mother forcing her to wash and to dress in a clean house dress, combed her long hair, and twisted it into a knot. For the first time in her life, the woman knew what it was to be pampered.”[1] It was said that in all of Magerou’s years of midwifing, she never lost a mother or baby.

In addition to working as a midwife, Magerou treated bronchitis and pneumonia and helped with “evil eye.” “If a child suddenly became lethargic, had an unexpected high fever or whined and cried for no apparent reason, mothers suspected that ‘someone with the Evil Eye had looked on the child with envy.’ Magerou might use three pinches of incense (burned in homes on Saturday to purify them for the Sabbath) or three drops of holy water. Three was a holy number symbolizing the Trinity. She recited the Lord’s Prayer during her ministrations to the ailing.”[2] She was also renowned for fixing back aches and setting bones. At least two men who faced amputation for broken legs were able to save and heal their legs due to Magerou’s care.

Magerou and her family moved several times to various places across Utah, but eventually re-settled in Magna’s Greek Town. She helped patients wherever she lived; people also traveled great distances for her treatments. As the Greek population continued to grow, so did their trust of local doctors. However, hostility and discrimination towards Greek immigrants increased as well. “Hostility exploded into night raids through Magna’s Greek Town, crosses burning on the foothills of the Oquirrh Mountains, and Klan marches from the hilltop graveyard down through Main Street. The immigrant mothers became afraid to call in American doctors. Whisperings became hysterical fears: the doctors could be Klan members themselves. Many women returned to Magerou.”[3]

Magerou continued working until her late seventies. She died at age 83. As Papanikolas wrote of her, “[Magerou] was the most important member of Utah’s Greek immigrant community and a symbol of the color and uniqueness of Greek immigrant life.”[4]