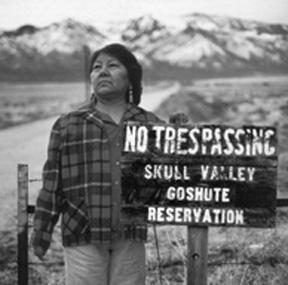 Margene Bullcreek, a member of the Skull Valley Band of Goshutes, spent her life working to protect her community from the harmful effects of nuclear testing and waste. Born in Tooele in 1946, she moved to the Skull Valley Indian Reservation at ten years old. As a young adult, Margene studied with paralegals on her reservation and started to better understand her Goshute identity and how the U.S. government had historically oppressed the native nation’s ways of life. This work led her to get involved in politics, becoming the secretary in the tribal council. She wanted to work to provide all the resources available for the members of her nation.

Working with organizations like the Healthy Environment ALliance of Utah, Margene wanted to protect native lands and people from U.S. government plans to dispose of harmful wastes on reservation land. Her ultimate goal was to stop the government from dumping nuclear waste on any native nation’s land due to its adverse health effects. Her commitment to her beliefs reflected her dedication to protecting the wellbeing of her community, even when she went against the wishes of tribal leadership .

Margene became an activist in the late 1990s when she began working with the Native Community Action Council (NCAC) to investigate the health impacts of nuclear testing on the Skull Valley Goshute nation. This investigation led to her becoming the president of the NCAC. As president, she also received funding from the CDC and the Agency for Toxic Substance Disease Registry to research native people’s exposure to Iodine-131, a chemical produced from nuclear testing. Additionally, as NCAC president, Margene participated in the U.S. Nuclear Regulatory Commission licensing of domestic nuclear facilities, where she used her research to intervene in the licensing for nuclear companies to dump waste in the Yucca Mountains.

In the early 2000s, Margene opposed a proposal in her community for a Monitored Retrievable Storage (also known as Private Fuel Storage) to store nuclear waste on the Skull Valley Goshute Reservation. Although many on the reservation, including tribal leaders, saw dumping as a new source of jobs and economic prosperity, Margene believed that the health consequences made the proposal more dangerous than beneficial. She led a small group called Ohngo Gaudadeh Devia (OGD) to fight the project, organizing a 65-mile run from the Skull Valley Reservation all the way to Salt Lake City to protest the PFS facility. She also filed petitions and legal challenges and attended the Nuclear Regulatory Commission licensing proceedings to try to prevent the site from being developed. Although the Commission approved the site in 2006, she ultimately prevailed. The nuclear companies who originally backed the project abandoned their license in 2006 without developing the site.

Margene Bullcreek continued her anti-nuclear work until she passed away in 2015. Environmental activist Chip Ward said “Bullcreek’s legacy can be seen in the structure that was never built.”

We’re grateful to Margene’s daughter Lisa for sharing information with us. You can learn about other leading Skull Valley Goshute women in our tribal histories section here.

Sophie Dau is a rising senior at Rowland Hall and plans to study history in college.