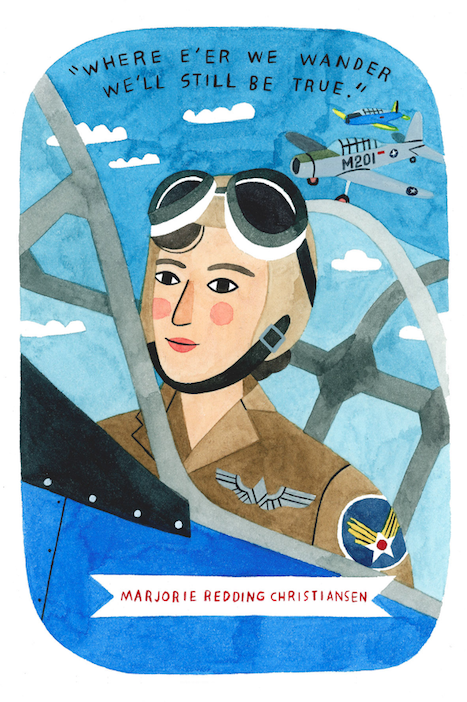 “Where e’er we wander we’ll still be true.”

For a two year period (1942-1944) during World War II, 1,074 women formed the Women Airforce Service Pilots (WASPs). These “Fly Girls” were the first women in U.S. history to fly American military aircraft. They racked up more than 60 million miles, flew every type of military aircraft, and piloted every type of mission flown by their male Army Air Force counterparts except combat. Marjorie Redding Christiansen was one of these brave pilots.

Born January 10, 1920, near Broadus, Montana, to Victor Thorne Redding and Susan Irene Olmstead Redding. After her parents divorced, Marjorie moved with her mother to South Dakota where her mother met and married William Frink and Marjorie grew up in Mystic, a little sawmill town in the Black Hills. Marjorie attended the Black Hills Teacher’s College in Spearfish, South Dakota. During her final year at the college, she enrolled in the Civilian Pilot’s Training, a free government-sponsored program to train pilots for the military that allowed one young woman to every nine young men. There were almost as many women signed up for the ground school classes as men, so the competition was tough, but Marjorie was one of the “lucky girls” admitted. In flight school, she learned about weather, aerodynamics, and navigation. Those who earned the best grades got the opportunity to fly and Marjorie earned that chance.

As Marjorie later recalled, “The training planes were small Piper Cubs, Aeroncas, Luscombes. They had 50 to 65 horsepower engines. The fastest ones flew at about 60 miles per hour airspeed. We flew off of Black Hills Airfield, about four miles out of Spearfish, an all grass field, no tar runways. Clyde Ice, noted pioneer in early flying, was the manager, and chief flight instructor, and there were two other flight instructors. We had eight hours of dual with the instructor, before he got out and told us each to take it around solo — don’t believe I ever felt so alone in my life as I did on that solo!”[1]

After flight school and college graduation, Marjorie taught school near Spearfish. A man from her flight school would pick her up in his plane during lunch or after school for flying time. In the summers, Marjorie went to Wichita, Kansas, to work in the aircraft factories. She was a final inspector for the Beechcraft Biplane, and she flew when she could in the Civil Air Patrol. 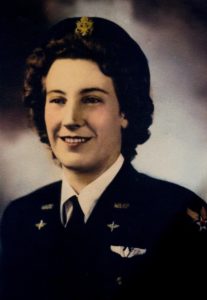 Marjorie Redding in her WASP uniform. Courtesy of the Christiansen family.

In the summer of 1941, after the outbreak of World War II, aviator Jacqueline Cochran and test-pilot Nancy Harkness Love both submitted proposals to the U.S. Army Air Forces to allow women pilots to fly non-combat missions as a means to freeing up male pilots to fly in combat missions. Cochran traveled to larger cities getting names of women who already had their pilots’ licenses and wished to enroll in what would become WASP. Marjorie and her friend from the Civil Air Patrol, Meriam Roby, decided to travel to Texas to enlist. While the WASP were not trained for combat, their course of instruction was essentially the same as male aviation cadets. They spent about 12 hours a day at the airfield with half the day spent in the air flying and the other half in classes and studying. By graduation, WASP recruits had 560 hours of ground school and 210 hours of flight training. They knew Morse code, meteorology, military law, physics, aircraft mechanics, navigation and other subjects.

After training, Marjorie was initially assigned to Dodge City, Kansas to train on B-26’s, but her orders were changed and she was sent to Independence Army Air Force Basic Training School for Air Force Cadets to fly the North American BT-14s after they were repaired. She also flew non-flying officers on administrative duty and flew cross-country many times. Once, before taking off, she noticed that the steering cables had been put on the plane backward. Even though mechanics doubted her, they checked and found she was right. On another occasion, Marjorie needed a dress, so she and her friend flew a military plane to Chicago to make the purchase. During World War II, women pilots flew 80 percent of all ferrying missions. They delivered over 12,000 aircraft. WASP pilots freed around 900 male pilots for combat duty.

After the WASPs were disbanded in December 1944, Marjorie and other WASP members were encouraged to apply for jobs with the Civil Service as Aircraft Communicators. Marjorie trained in Pacific Palisades, California, and then she was eventually sent to Fairfield, Utah. She met and married her boss, Raymond Christiansen, which meant that she had to resign from her job as she could not work under her husband. The couple settled in Enoch, Utah, and would have six children. In addition to raising her children, Marjorie started the Cub Scout program in the area, serving with the organization for almost 30 years and receiving the prestigious Silver Beaver award in 1976. 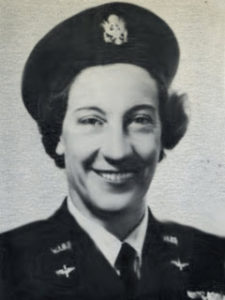 While members of WASP fulfilled many military duties, they were U.S. federal civil service employees and had no military standing or benefits and were not originally recognized as veterans. Each WASP member paid for her own transportation costs to training sites, for her dress uniforms, and for room and board. Additionally, Thirty-eight WASP members lost their lives and one disappeared while on a ferry mission.

In 1977, after much lobbying, members of WASP were granted veteran status. In 2005, Marjorie was honored by the Arnold Air Society/Silver Wings Joint National Project with Wings Across America. Marjorie died in 2008, just a few years before President Obama and U.S. Congress would award WASP members with the Congressional Gold Medal. Only 300 women of the group were still living at this time. President Obama said, “The Women Airforce Service Pilots courageously answered their country’s call in a time of need while blazing a trail for the brave women who have given and continue to give so much in service to this nation since.”[2]