“We protest against the movement to deprive us of the elective franchise.”

A prominent leader in an astounding number of political, business, ecclesiastical, and charitable organizations, Mary Isabella Hales Horne wielded remarkable influence in nineteenth-century Utah. “Mrs. Horne has ever been an earnest and independent thinker and as a firm believer in the equality of the sexes was for many years one of our strongest advocates of woman suffrage,” the Salt Lake Herald said of her.

Born in Kent, England on November 20, 1818, Mary Isabella moved to Canada in 1832. After she married Joseph Horne in 1836, the newlyweds joined the Church of Jesus Christ of Latter-day Saints, a decision which led them to Far West, Missouri; then to Nauvoo, Illinois; and finally across the plains with some of Utah’s earliest settlers in October 1847. She was the mother of fifteen children, including three sets of twins. 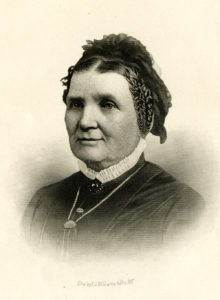 While in Nauvoo, Mary Isabella “became much interested . . . in the elevation of woman” and became a lifelong women’s rights advocate. When thousands of women gathered in Salt Lake City in January 1870 for a “Great Indignation Meeting” where they voted to demand the franchise, she actively participated both as a speaker and as a member of the committee to draft resolutions. Following the passage of Utah’s historic Woman Suffrage Bill just weeks later, she served on the committee to draft a letter of gratitude to the territorial governor for signing the bill that granted women’s suffrage. From that moment of enfranchisement, Mary Isabella took the “greatest interest” in woman’s suffrage and never missed an opportunity to vote.

“Everything a woman can do to prepare themselves to aid in the political elevation of the sex,” the Woman’s Exponent said of her, Mary Isabella Horne ”sought diligently to do.” She regularly attended precinct meetings, served as a delegate to the People’s Party Territorial Convention in October 1882, and was one of only two women elected at that convention to the party’s Territorial Central Committee. At that 1882 convention, Mary Isabella delivered her first political speech in response to an impromptu request, declaring, “I believe in true liberty for men and women and do not consider it should be infringed upon by anyone. I think women should be afforded every opportunity to become intelligent.”

In 1886, Mary Isabella was unanimously elected chair of a mass meeting to protest the impending Edmunds-Tucker Bill, which ultimately disenfranchised Utah women. Responding to a notice of the meeting she published in Salt Lake City’s newspapers, more than 1,500 women and men crowded into Salt Lake Theater to hear her and other suffragists speak in defense of their rights. 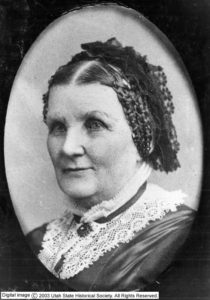 During this time, she also served as president of the Senior Cooperative Retrenchment Association from 1870-1904, vice-president of the Utah Silk Association in 1876, chair of the Utah Women’s Committee of Philanthropies and Charities for the Chicago World’s Fair in 1893, chair of the Executive Committee for the Deseret Hospital from 1882-1894, and president of the Women’s Cooperative Mercantile and Manufacturing Institution from 1890-1905. Upon Mary Isabella’s death, Emmeline B. Wells described her as “a born leader, a sort of General among women,” and “a stalwart, a champion for the rights of her own sex, and indeed for all mankind.”

Rebekah Clark holds a law degree from J. Reuben Clark Law School and a bachelor’s degree in American History and Literature from Harvard University, where she wrote her honors thesis on Utah’s participation in the national women’s suffrage movement. She is a member of the Mormon Women’s History Initiative Team and the Historical Research Associate for Better Days 2020.