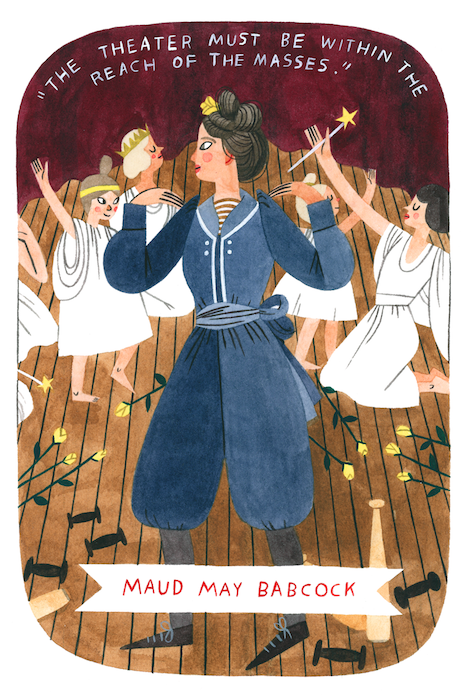 “The theater must be within the reach of the masses.”

Known as the “First Lady of Utah Theater,” Maud May Babcock was a beloved teacher, physical fitness enthusiast, actress, author, mentor, leader, and world traveler. Born in East Worcester, New York, to William Babcock and Sara Jean Butler, Maud was educated in New York public schools. She earned a Bachelor of Arts from Welles College, a Bachelor of Education from the National School of Elocution and Oratory in Philadelphia, and graduated with a diploma from the American Academy of Dramatic Arts. She also studied at the University of Chicago and in London and Paris. 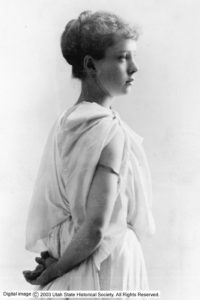 While attending a physical education summer course for women at Harvard University, Utah suffragist Susa Young Gates was captivated and impressed by her young teacher, Maud. Susa convinced her to move to Salt Lake City, where Maud took a position at the University of Utah as a professor of oratory and speech, becoming the university’s first female faculty member. Maud intended to stay for only one year, but four months after her arrival, she became a member of The Church of Jesus Christ of Latter-day Saints and decided to stay. At the University of Utah, she founded and taught in two departments, the Department of Speech and the Department of Physical Education, and became the first female chair of a department at the university.

“Miss B,” as her students called her, worked hard to legitimize these new disciplines in the eyes of her academic colleagues. She believed in educating the whole individual, stressing the importance of physical, mental, and spiritual health. This impeccably-dressed professor required detailed precision from her students and penned her notes and comments to students and friends in purple ink. In Maud’s 47 years at the university, she was known as an eccentric and forceful influence who paid tuition for students who could not afford it and who invited students to her mountain cabin in Brighton. She would outdo them by climbing nearby peaks and then preparing them gourmet, vegetarian meals.

Maud’s first public production occurred in 1893 and was described as “largely a demonstration of drills with dumbbells, wands, Indian clubs, and dances” with dramatic elements.[1] That same year, she and her brother, Dr. William Babcock, donated money to set up the first women’s gymnasium in Utah in Salt Lake City’s remodeled Social Hall. Maud was also a proponent of women’s rights, insisting that “our women must and are freeing themselves from the false ideals of our grandmothers that little girls should ‘sit still,’ ‘be quiet,’ ‘fold their hands,’ and grow up ‘little ladies.’”[2] Accordingly, Maud was opposed to corsets, a popular women’s clothing item at the time, because they restricted movement and breathing. Maud also introduced the “bloomer suit” to her female students to wear while playing basketball, a sport she brought to the University. The controversial attire prompted protests from some students’ mothers since it revealed knees and ankles. Despite the protests, Maud’s more practical uniform choice prevailed. She continued coaching women’s basketball until 1900, a full decade before men’s first basketball games at the University. Maud’s bloomer uniform is now on display in the basement of Social Hall. 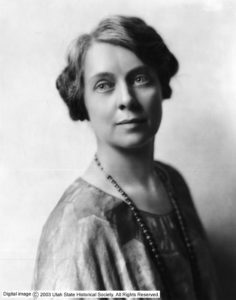 In 1895, Maud produced and directed Eleusthenia, based on the Greek harvest festival and the myths of Demeter and Persephone, at the Salt Lake Theatre. One hundred of her female students performed in what was the university’s first dramatic production and the first play produced by a university in the United States. Maud continued to direct and produce plays every year–producing over 300 plays–and formed student and professional theatre companies. The best productions traveled to smaller communities throughout Utah and Idaho as part of the new regional, non-profit theater movement to make theater more accessible.

Maud was also committed to developing the public’s taste for theater, bringing first-rate productions and nationally and locally-acclaimed actors to the area. The University of Utah built Kingsbury Hall in 1930, providing an on-campus home for Maud’s and others’ productions. She continued traveling throughout the region doing readings and giving lectures, and she eventually wrote and published five books on speech and elocution.

Maud served as president of the National Association of Teachers of Speech, becoming its second female president, and also served as a trustee and as president of the Board of Trustees for the Utah State School for Deaf and Blind. She was the first woman to preside over the trustees of a state institution. Along with her work in physical education and theater, Maud was the first woman to serve as chaplain in the Utah senate–the first woman chaplain in any state senate in the country. “She wrote her short prayers carefully and undoubtedly delivered them with the same vigor that characterized everything else she had done in her life.”[3] 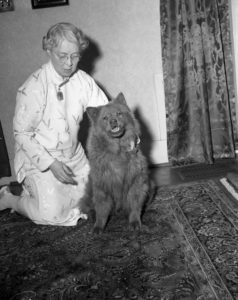 Maud May Babcock with her dog, Wu, in 1942. Courtesy of Utah State Historical Society.

Upon her retirement from the University of Utah in 1938, Maud received an honorary doctorate from the institution. She was 71 years old and claimed to have the longest active service of any faculty member. Maud continued as a warm and impeccable hostess; many former students would drop in to visit her at her home which was decorated with objects from her world travels, including a doll collection dressed in authentic costumes which she used as models for costuming plays and operas. Maud was also especially fond of treasures from ancient Chinese culture, her Chow dog, Wu, and Loreeta, a mimicking parrot from South America.

Later in her life, Maud shared that her “greatest accomplishment [was] the devotion of [her] students.” Her work impacted the lives of four generations of students and her legacy of theater and physical education in Utah continues today. The lower level theater of the Pioneer Memorial Theatre on the University of Utah campus now bears her name. “The theater has been my life,” she said, “and it cannot stop.”[4] Maud May Babcock died at age 87 from complications of Alzheimer’s disease.