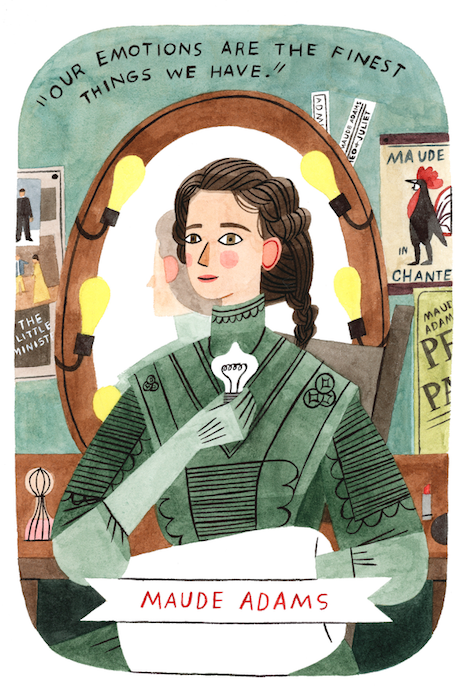 “Our emotions are the finest things we have.”

Known as the most famous and highest-paid actress of her time, Maude Adams was an incredibly beautiful and “an intensely private person who donned so many personalities, she alluded to her own as being ‘the one I knew least.’”[1] In addition to her acting success, she helped invent technology to improve stage lighting and develop color film photography. 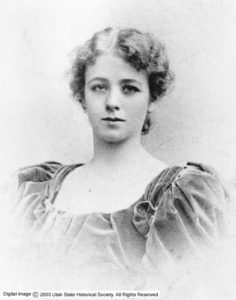 Born Maude Ewing Adams Kiskadden to James Kiskadden and Asaneth “Annie” Adams in Salt Lake City, Maude often accompanied her actress mother on tour. Her stage debut came at two months old in the play The Lost Baby at the Salt Lake Theatre in Salt Lake City. Despite her father’s objections, Maude began acting as a young girl and adopted her mother’s maiden name as her stage name. The family moved to San Francisco, and Annie and Maude traveled throughout the western United States with a theatrical troupe. At age five, she debuted in San Francisco; at age ten, in New York City. Within a decade she had performed in 26 plays.

Maude briefly returned to Salt Lake City, where she lived with her grandmother and enrolled at the Salt Lake Collegiate Institute (now Westminster College), but soon was back performing, leaving behind child roles, joining various theatre companies, and sometimes still appearing alongside her mother. In 1889, Maude met producer Charles Frohman, who propelled her career forward by casting her in a variety of successful roles, including a series of plays with leading man John Drew, Jr. Audiences came to see Drew, but were impressed with Maude. During the opening of The Masked Ball in October 1892, the audience gave her a two-minute standing ovation and 12 curtain calls. Harpers Weekly wrote: “It is difficult to see just who is going to prevent Miss Adams from becoming the leading exponent of light comedy in America.”[2] 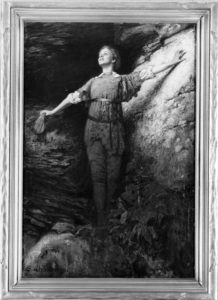 Maude’s greatest successes came by acting in several of J. M. Barrie’s plays. Her most famous role was debuting the character Peter Pan on Broadway in 1905. She acted in more than 1,500 stage performances of Peter Pan and made $20,000 a month. Children would attend the performance night after night, memorizing all of the lines. At her peak, Maude was earning a yearly income of more than one million dollars. Maude wrote of her feelings about Peter Pan:

It was not only that Peter was the most delightful of all the plays, but it opened a new world to me, the beautiful world of children. My childhood and girlhood had been spent with older people, and children had always been rather terrifying to me…Children remained an enigma to me until, when I was a woman grown, Peter gave me open sesame; for whether I understood children or not, they understood Peter.[3]

While she was best known for her portrayal of Peter, Maude’s favorite role was playing the male rooster, Chantecler, a role that was originally written for a man, but that she wanted to portray. The show was a financial success even though critics and reviewers hated it. They especially disliked Maude’s performance because she was a woman. “Chantecler is essentially a masculine role…and Miss Adams is essentially a feminine actress,” a reviewer wrote. “Nothing could be more incongruous than a woman’s essaying to play a character whose strength and value depend on upon masculine virility,” wrote another.[4] Maude was also known for playing other male roles, like Napoleon II, in what were known as “breeches productions” in reference to the actresses who wore men’s pants to perform. Despite Maude’s preference, she also played strong female leads. Her role as Joan of Arc in The Maid of Orleans was a grand production that included 1,400 actors, grazing sheep, and 200 charging stallions all performing to an audience of 15,000 at a Harvard open-air amphitheater. The famous Art Nouveau painter Alfons Mucha also designed a renowned poster of Maude as this leading lady. 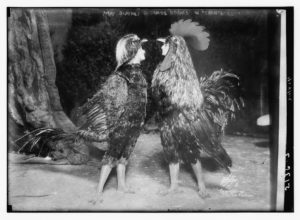 May Blayney (left) and Maude Adams (right) in Chantecler. Photo courtesy of Library of Congress.

Fashion was also a very important aspect of Maude’s life. From a young age, she wrote about her fashion dreams in third person. Her preferred color was a shade much like the gray-green of sagebrush. Her wealth made her fashion dreams a reality, and her fame made her fashion choices influential to the world. The San Francisco Chronicle published a column devoted to Maude’s fashion influences writing that “Miss Adams carried a muff of snowy lamb’s wool [a fashion accessory for outdoors usually made of a cylinder of fur or fabric with both ends open for keeping the hands warm] so huge that it reached from her waist down to her knees. Women were delighted with this muff. They said, ‘It not only keeps her hands warm, but all the lower parts of her as well. It is very picturesque to carry a muff so enormous…’ Miss Adams thinks the big muffs are delightful. “Yes, it is true,” she said, “that I made them the fashion. That is why I like them so much.’”[5] 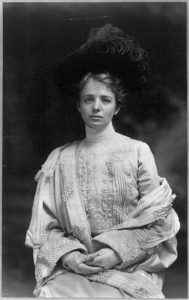 Maude Adams in 1902. Photo courtesy of Library of Congress.

Maude also developed an interest in stage production, collaborating with technicians and engineers on multiple inventions to improve stage lighting. Basset Jones, an electrical and lighting engineering consultant, and Maude developed and modified incandescent electrical lighting for the theater since existing lights were too weak and cumbersome for the theater. They made this lighting stronger, smaller, and more mobile. Maude also established and funded her own research team to investigate the possibilities of developing stronger incandescent lighting. So promising was the team’s research that they were able to form collaborations with General Electric and Eastman Kodak which resulted in the manufacturing of the world’s then largest incandescent lamp. In 1924, Maude established Maude Adams Productions and participated in color film experiments with Kodachrome in collaboration with filmmaker Robert J. Flaherty. 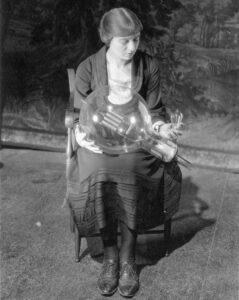 Maude with incandescent lamps in 1922. Museum of Industry and Science.

Maude was never given credit for her inventions, and even though her lawyer advised that she sue, she did not. She later regretted this decision, and whenever she saw her lights being used she would say, “Those are my lamps.”[6] Her lights ultimately became the industry standard in Hollywood with the advent of sound in motion pictures in the late 1920s. In addition, they were particularly invaluable in the filming of color photography under artificial lighting. Her collaborator, Bassett Jones said of her: “She completely revamped the whole art of stagecraft—setting and lighting…In my opinion, Maude Adams was the greatest production artist this country ever saw.”[7] 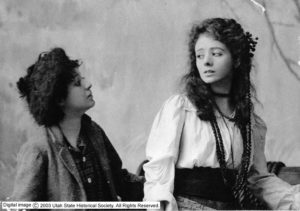 In 1916, after a series of close friends and family died in a span of a few months, including her producer Charles Frohman, her costume designer, her stage manager, and her mother, Maude retired for a time from acting. She began World War I war work classes where she learned cooking, marketing, and gardening, volunteered at the YWCA, and did some entertainment touring during the war. “One of her dearest ambitions was to educate women about society’s needs, hoping to inspire more responsibility in public affairs.”[8] Additionally, her philanthropy work included helping recovering soldiers and earthquake and flood victims and appearing at fundraisers to help build new college theaters. She was also known for sending tickets for blocks of seats to disadvantaged kids so they could see Peter Pan and for supplementing the salaries of fellow performers out of her own pay. 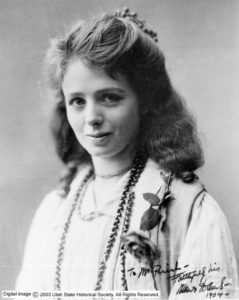 Maude’s immense wealth allowed her to purchase properties in Salt Lake City, Manhattan, and a 400-acre farm and estate on Lake Ronkonkoma in Long Island with a summer home in the Catskill Mountains. After “suffering a nervous breakdown, she found solace and comfort among the sisters of Our Lady of the Cenacle and bequeathed her land to them.”[9] She also traveled during the summers for rejuvenation to Europe, even spending a year in France to learn to speak the language. At the age of 65, she took a position as the chair of the drama department at Stephens College in Columbia, Missouri, teaching there until age 78. Even though Maude was suffering from poor health, she threw herself into the work of developing young women actors.

Maude died of a heart attack at age 81. She and her longtime partner, Louise Boynton, share a gravestone on Maude’s Long Island property.

[2] As quoted in Castor, Rachelle Pace, “Maude Adams: No Other Actress Can Take Her Place,” in Colleen Whitley (Ed.) Worth Their Salt: Notable But Often Unnoted Women of Utah. Logan, Utah: Utah State University Press, 1996, pp. 197.

[4] As quoted in Laskow, Sarah, “The Famous Actress Who Loved Playing a Rooster,” Atlas Obscura, 6 December 2016.