May Swenson, A Great Modern Poet 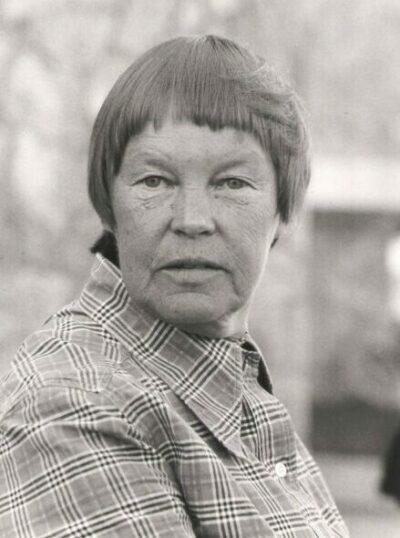 May Swenson was a modern poet renowned for her use of imagery, unique typography, and language. Born in Logan to immigrant parents, she grew up speaking Swedish as her first language. May graduated from Utah State with her BA in 1930 and later moved to New York to pursue her writing. It took many years for her work to be recognized and published, but ultimately she was praised as one of greatest poets of her generation. She penned deep contemplations of life, feminism, the LGBTQ experience, and also children’s poetry.

May was born in 1913 to Swedish parents who had both emigrated to the U.S. after joining the Church of Jesus Christ of Latter-day Saints. She and her 10 siblings grew up in Logan, and May spoke Swedish as her first language. May was imaginative and creative and learned English quickly at school. Her sister remembers her telling the other students on her first day of kindergarten that the water fountains were full of lemonade. She started writing poetry by age 12, and her first story, “The Grizzly,” was published in her high school newspaper. 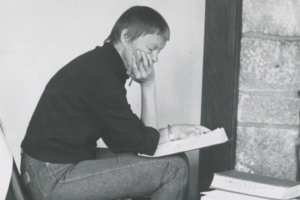 After high school, May stayed in Logan and attended Utah State University, where she received her BA in English with a minor in art. After graduating, she took up a job soliciting advertisements for a newspaper in Salt Lake. May needed a change, so she borrowed $200 from her dad and moved to New York City to pursue her dream of being a writer. She knew she wanted to live there forever and wrote in her diary that she hoped to find herself and learn to “create beauty.” Life was difficult for May in New York during the Great Depression, and work was scarce. It took tenacity for May to achieve her dream, but every job she took got her closer to her goal. She worked her way up to be able to afford an apartment in Greenwich Village, which solidified her place in the artistic community.

May finally got her big break when her poem “Haymaking” was published in The Saturday Review of Literature. After this, her work began to be published in outlets like The New Yorker, such as with her poem “By Morning.” By her 40th birthday, the Scribner’s Poets of Today series published her poetry book, Another Animal. Finally, her work was being shared with the world. 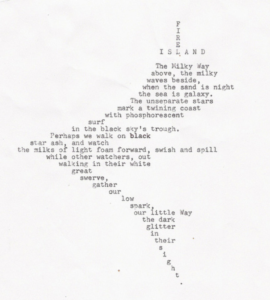 May’s poetry was unique in its vivid imagery and its ability to evoke emotion. The Los Angeles Times wrote: “correspondences among all life forms poured from her work, confirming that nothing is meaningless. The universe’s basic beauty and balance is the stuff and soul of her poems.” May’s poems were not only emotional and beautiful, but she also experimented with typography, the way words look on the page. She could create an image in how her prose was written visually. Examples of this are in her collection Iconographs. May also published four collections of poems for children. Another genre May wrote for was romance that represented the LGBTQ experience. Overall, May’s poetry spoke to people of many demographics, and she was a trailblazer in showing that poetry is for everyone.

One of May’s most meaningful opportunities was as a poet in residence at Purdue University. While working at Purdue, May met R.R. Swenson or “Zan,” who also was an English professor. They hit it off and were partners for life. They bought a house in Sea Cliff, Rhode Island, and traveled all over Europe, America, and New Zealand. 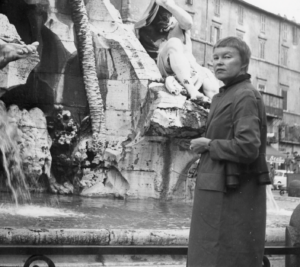 May in Rome. WUSTL Libraries.

The publication of May’s poetry opened many doors for her. In 1957, she was appointed by John Ciardi as the Robert Frost fellow and got to meet with Robert Frost that summer. By 1959, May was offered a position as an editor for the modernist publishing company New Directions Press founded by James Laughlin. She published some of her most famous poems during this period.

May continued to achieve great success and had opportunities to read her poems in the White House, Harvard, and Yale. She received many acclaims during this time, like an honorary Ph.D. from Utah State. One of her most prestigious awards was the MacArthur Fellowship, which gave her $380,000. She split the first installment of the fellowship among her siblings, calling it the “Swenson Fellowship,” and gave smaller fellowships to her nieces and nephews. Her final position was as Chancellor of the Academy of American Poets, which she held until her death. Although she had received so much rejection early on in her career, she never gave up and encouraged other writers to persevere. 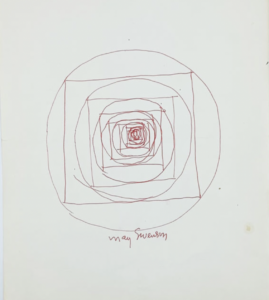 A signed self-portrait by May. Abe Books.

Today, May is seen as one of the great modern American poets. Utah State University has honored her by naming a park, a path, and a room in the library after her. The May Swenson Poetry Award at USU was also named in her honor. Though May Swenson is well known in the poetry world, she still was personally private and shy. Her self portrait shows an element of mystery but draws us back to her poems, which offer a glimpse of her soul. Her poem “The Wonderful Pen” encourages readers to “Read me. Read my mind.”

Grace Chipman is a Junior studying History with a minor in Global Women’s Studies at Brigham Young University. She hopes to earn a Ph.D. in women’s history.