Minerva Teichert, A Storyteller Through Art 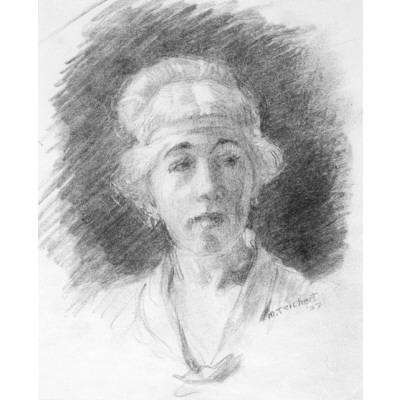 “There’s too much sagebrush in my blood to forget the beauties of rugged mountains [and] dry plains.”

Minerva Teichert is known for her contributions to Western, Native American, and Mormon art. Born in Ogden in 1888, Minerva discovered a love for art at a young age and drew horses on her farm outside of Idaho Falls, Idaho. She attended art school in Chicago and New York City. While in New York, she trained under the renowned artist Robert Henri, who encouraged Teichert to “tell the Mormon story” through her art. There Teichert began her most famous collection depicting scenes from the LDS sacred text the Book of Mormon. Teichert married and settled down on a homestead in Cokeville, Wyoming. When she wasn’t tending to chickens, cattle, and children, she painted whenever she could. One of her outstanding life works was her mural in the Manti, Utah LDS Temple. Minerva established herself as a talented artist who used her art to tell stories that had never been spoken. Today, Minerva is praised for her authenticity in her artistic style that paved the way for women to have a place in the Western and religious art world. 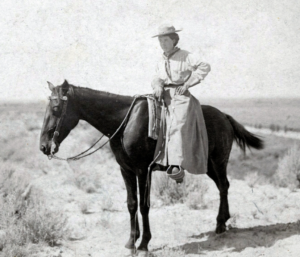 Minerva came from pioneer stock, with ancestors who crossed the plains and were crucial figures in settling Utah. This solid Western heritage was instilled in her from a young age while growing up on a homestead outside of Idaho Falls. Minerva was educated at home, where her parents taught her history, geography, and the complete works of Shakespeare. Minerva considered this education a critical influence on her art. She started drawing as a child, filling sketchbooks with horses, Gibson girls, and everything around her. This time of her life was essential to fostering her individuality and helped her realize her unique talent. 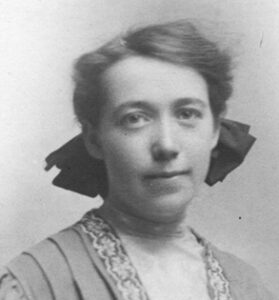 At 15, Minerva took a job in San Francisco as a nursemaid. She took an art class at the Mary Hopkins Art School, the beginning of her formal training. After high school, Minerva attended the Chicago Art Institute, where she trained with John Vanderpool. Mr. Vanderpool was tough on Minerva compared to her peers. When she asked him why, he explained, “‘Miss Idaho, can it be possible you do not understand; they’re not worth it, they will drop out, but you—ah, there is no end.”[1]

When Minerva finished schooling in Chicago, she moved back to Idaho to make money. There she met a kind, quiet cowboy named Herman Teichert. They courted for a few years but struggled in their relationship because they belonged to different religions. Minerva’s mother was so against the match that she offered to pay for Minerva’s education at the Art Students’ League in New York City. Minerva took her mother’s offer and left, telling Herman to marry someone else.

Minerva loved her experience in New York and at the League. She spent her time outside school attending operas, concerts, and suffrage meetings. The League was the best art school, with students from around the world. Minerva trained under the famous portrait painter Robert Henri. Henri encouraged his students to paint from their experiences. He ranked Minerva as one of his top three students, along with George Bellows and John Sloan who became some of the foremost 20th-century artists. While Minerva was painting in class one day, Henri asked her, “Has anyone ever told your great Mormon story?” She replied, “Not to suit me.” He responded, “Good heavens, girl, what a chance. . . . Oh, to be a Mormon. . . . You’ll do it well.” Minerva later recalled this experience and concluded, “I felt like I had been commissioned.”[2] Minerva started her famous Book of Mormon collection while in New York. Doors were opening for her to be a renowned artist, but she felt called home to be with Herman and to tell her people’s stories in the West through art. Though she left New York behind, Robert Henri remained a close friend.

On returning to Idaho, Minerva married Herman Teichert. Her desire to paint was still strong while she was starting a new life with Herman on a ranch near Cokeville, Wyoming. When she wasn’t caring for the farm, children, and home, Minerva had opportunities to paint murals in various LDS stake centers and chapels across the West. The most prominent mural she painted was in the Manti, Utah LDS temple in 1940. She was the first woman to paint a mural in an LDS temple and completed it in record time with the help of only one person. Her mural was unique in portraying people, unlike other temple murals that only depicted nature. The mural is still in the Manti Temple and is being preserved amidst a renovation. 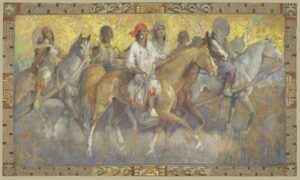 Minerva loved living in the West and often painted the Western story. As a child, she rode her horse onto the Fort Hall Indian Reservation and sketched what she saw. She recognized from a young age that Native American culture is central to the West. She painted many depictions of Native Americans and their culture inspired an iconic headband she wore. Though her depictions portray an outside perspective, her art inserted the Native American experience into the story of the West. 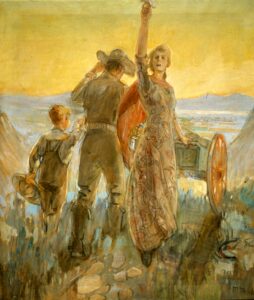 Minerva painted many people of the West. She often painted the cowboys she hosted in her home as a rancher’s wife. And she also depicted her pioneer ancestors who emigrated to Utah. These pioneer depictions always focused on women. Her family often described her as following in the footsteps of her strong maternal line, which she depicted in her art. No matter where she was, she was drawn to painting the West, a place she always felt was her home.

Throughout her life, Minerva slowly worked on responding to the call to paint the story of her people. Between 1949 and 1952, Minerva completed her famous series of 40 scenes from the Book of Mormon. Minerva was conscientious of the importance of representing women’s stories in her art and included many women in the narrative. The women in her paintings wore bright colors and patterns to symbolize the power that women have. 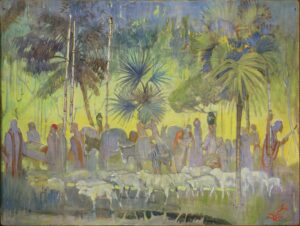 Once Minerva completed the series, she could not find a market for it. Her goal was to publish the paintings in a book, but paying for the publishing herself was impossible. She tried improving the images by adding more color, but nothing worked. No one wanted them. However, she never doubted that her paintings were good and told an important narrative. In her final years, Minerva donated the pieces to Brigham Young University. The LDS Church magazine, the Ensign, finally published the series after her death, bringing them to the public. 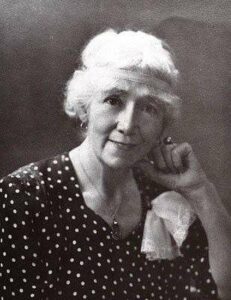 Minerva was well known in her community as vivacious, dramatic, and a bit unusual, but also beloved. Her shocking white hair and iconic headband (that she claimed held her brains in) made her stand out. Though the people around her may not have known much about art, she said they were her best critics and greatest supporters. She loved her community and was known to take a bouquet home after attending a funeral. Days later, she would return to the family with a painting of the flowers. Minerva taught art in Cokeville and hoped to teach at BYU, but was never offered a position. No one went on to imitate her style.

In the last years of her life, Minerva’s health deteriorated, leaving her with poor eyesight and lead poisoning from her paints. She died in Provo, Utah, in 1976. Though she did not receive acclaim for her art until after her death, she always believed that it had something to offer. Her grandchildren often asked her if she was a famous artist, to which she replied, “No, but I will be someday.”[3] She was right.

Grace Chipman is a Junior studying History with a minor in Global Women’s Studies at Brigham Young University. She hopes to continue her education in getting her PhD. and returning to BYU to teach women’s history courses.