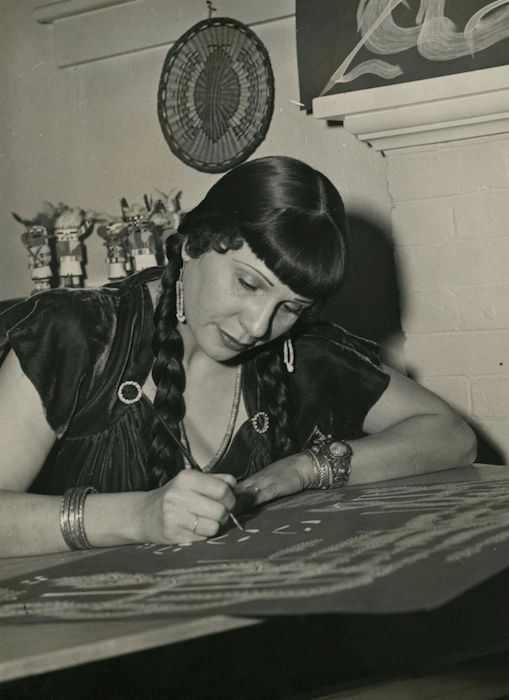 Pop Chalee was born Merina Lujan in 1906 in Castle Gate, Utah. Her father was Taos, a Puebloan Native American tribe in New Mexico and her mother Merea Margherete Luenberger, was Swiss. Her Taos grandmother gave her the nickname “Pop Chalee” which means “blue flower.” After her parents separated, Pop and her siblings were  sent by their father to the U.S. Indian School in Santa Fe, New Mexico.

Then as a teenager, Pop returned to Utah to live with her mother who was a member of the Church of Jesus Christ of Latter-day Saints and while she was very strict with Pop, she was also incredibly independent. Tired of living with her mother, Pop left her mother’s home at age 16. She married Otis Hopkins, a Mormon wood and metal craftsman. They had two children by the time Pop was twenty years old, and the family moved often between the Taos pueblo and Salt Lake City. She would later marry her second husband, a Navajo artist and Hatałii, or medicine man, named Edward Lee Natay, in 1947.

While living in Salt Lake City, Pop began speaking at LDS churches about her experiences as a Native American, inadvertently becoming a representative of her people. Educating a non-native public about Native life was a continual focus of Pop’s life.  Pop was also involved in activism in the 1930s on the part of the Taos people to help them attain them full legal and educational rights.

Pop did not consider an art career until she was 29 and visited a fortune teller who told Pop that she was destined to become somebody and would return to the place she always loved. Pop interpreted this place to be Taos, so she and her family returned to Santa Fe and she enrolled again in the Indian School to pursue an education in art. As an older student and the only woman student for a time, Pop started her art studies with some difficulty. However, her art teacher, Dorothy Dunn’s encouragement and patience eased Pop’s insecurities. After finishing her first year, Pop worked at the Laboratory of Anthropology as a paid copyist for Kenneth Chapman to document designs from the Laboratory’s vast collection of Native American pottery. This exposure to Native art techniques and history strengthened her pride in the work of other Native American artists.

Pop’s art was influenced by her dreams and Native culture and history. Known for her paintings of mystical horses and enchanted forests, her work  became very famous, and so did she. In the 1940’s and 50’s, non-Native people were fascinated with Native American culture and so she and other Native artists were hired for commissioned paintings, book illustrations, and they were often portrayed in movies.

Many museum collections house Pop’s work including the Gilcrease Museum in Tulsa, Oklahoma, the Heard Museum in Phoenix, Arizona, and the Millicent Rogers Museum in Taos, New Mexico. The Albuquerque Airport permanently displays many of her murals. Her work was also exhibited throughout the United States, including the National Gallery of Art in Washington, D.C., and the Gallery of Living Artists in New York City.