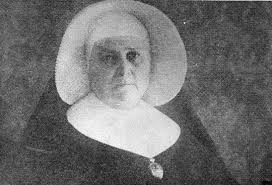 Sister Augusta was born Amanda Anderson in 1830. After her mother died, she was raised by her aunt on a ranch in Ohio. The ranch was near an Indian reservation and had a processing mill which the local native Americans used to grind their corn. Amanda worked the mill and began to visit the Indian territories regularly, where she helped formulate medicine and care for the sick. In 1854, she joined the Sisters of the Holy Cross, took the title of “Sister Augusta,” and moved to Indiana. She used her medical experience with her native neighbors to care for soldiers on both sides during the Civil War. 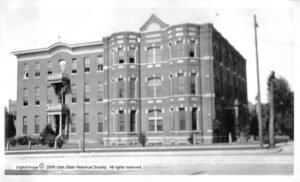 After the war, Sister Augusta moved to Salt Lake City to help open a Catholic school in Utah. She raised nearly $25,000 to build the structure by visiting every nearby mine to solicit donations from Catholic mine workers. The all-girls St. Mary’s Academy opened on First West and Second South in Salt Lake City in 1875, enrolling ing about 100 students per year. Students were not required to be Catholic to attend and most were not, but the curriculum was heavily influenced by Catholic doctrine and principles. The Catholic population in Utah grew immensely in the early 1900’s, and so the school expanded every year. Eventually, St. Mary’s Academy was bought by the Sisters of the Holy Cross in 1926 and moved east, where it remained for over forty years.