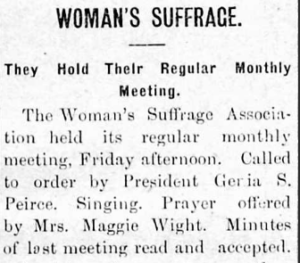 The Woman’s Suffrage Association of Brigham City was the first suffrage organization in Box Elder County. At the time, the county encompassed a large portion of northern Utah, as well as small areas in Idaho and Wyoming. Genia Peirce led the association and eventually influenced women in the nearby town of Willard to establish their own suffrage association. The association in Brigham City represented a large population of Utah women, and provided the women of northern Utah with an opportunity to participate in suffrage activism. The association held monthly meetings where they would give speeches on suffrage, teach lessons on government and civics, and discuss local matters. 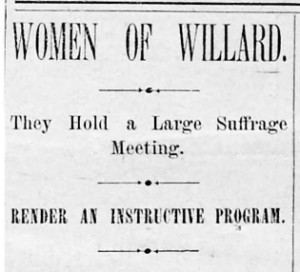 The Woman Suffrage Association of Willard  was established in the summer of 1892 with Ellen Ward as president and Maria Zundel as corresponding secretary. It worked closely with the Suffrage Association of Brigham City to promote and educate the women of Box Elder county on their rights and roles in society. Their monthly meetings focused on the movement to regain women’s suffrage in Utah but also addressed local issues and education. In 1894, leading Utah suffragists Emmeline B. Wells and Mary A. Freeze visited Willard to speak about suffrage activism and get a report on what the women of Willard were doing to promote suffrage for women in Utah.

Amelia Graehl was a leader in church and civic affairs in Brigham City and Box Elder County at a time when it was unusual for women to be in the public spotlight. She was born in 1866 in Brigham City to Swiss immigrants and was very musical, playing piano and singing for funerals and other events. Amelia held many leadership positions in the Church of Jesus Christ of Latter-Day Saints, which probably helped give her the confidence and organization abilities that would carry her through life.

Amelia took a position as manager at F.E. Warren Mercantile in 1890. They had a line of pianos, organs, and other instruments which fit her musical talent and organization skills. In 1892, at age 26, she was selected to be on the Board of Directors for the County Territorial Board of Lady Managers to work in the interest of the World’s Fair at Chicago. They were to gather items for display from all parts of Utah to display in the Women’s Building at the Fair. The organization felt it was a wonderful opportunity to show the world how accomplished Utah women were.

In 1896, Amelia was nominated for county recorder among “whoop and holler and trumpets”! She was the only woman on the Democratic ticket and the only Republican, but because of her background and expertise she had the full support of those in attendance. She stayed active in politics for the next few years, serving as Assistant secretary for the reorganization of the State Republican convention and delegate to the Box Elder County Republican Convention in 1904 and 1906.

Amelia moved to Salt Lake about 1907 and worked for the Utah Implement and Vehicle Company as a manager and later as a cashier. She died 1958 in Salt Lake City. She was a wonderful example of stepping forward and volunteering in community, government and her church. 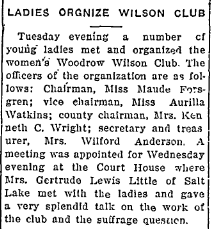 In 1916, the women of Brigham City organized the Woodrow Wilson Club for Ladies, with Maude Forsgren as Chair. The club was to promote education and activism in the community, and provide the women of Brigham City with an forum to discuss, educate, and organize. The club was dedicated to the platform of democratic President Woodrow Wilson, who was running for re-election in 1916, and it became a place for women to practice and learn within the political party that they identified with. 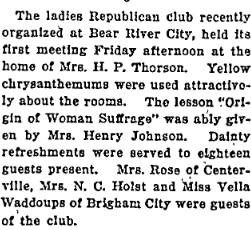 In 1922, a few years after the Democratic ladies of Brigham City established the Woodrow Wilson Club, the Republican women of Brigham City established a ladies’ Republican Club. Their first meeting included a lesson on the origins of women’s suffrage and was decorated with yellow flowers because yellow roses had been a symbol of support for the suffrage movement. The club was politically influenced by the Republican Party and gave women in the area an opportunity to organize and get educated about politics and current events.

Lucinda P. Jensen was raised on a ranch in Bear River Valley and worked closely with her mother to manage the ranch after her father passed away when she was fifteen. She later studied at the University of Utah and worked as an assistant to Emmeline B. Wells on the Woman’s Exponent, a woman’s newspaper. She and her husband were successful stock raisers in the Bear River Valley, and Jensen served as president of the home and community department of the County Farm Bureau and the Ladies’ Woolgrowers of Northern Utah, as well as actively participating in other local business organizations. She was elected to the Utah House of Representatives in 1928, the first woman to serve in state government from Box Elder county. Jensen was chairman of the Committee on Public Health during her term in office.

Petitions about women's suffrage in the Utah state constitution

As Utah prepared for statehood, many people assumed that women’s suffrage would be included in the proposed constitution–after all, Utah territory had granted women the right to vote in 1870, only to see that right revoked by the U.S. Congress in 1887, and support for women’s suffrage was high across Utah. However, opponents of suffrage (and even some who favored it) were concerned that including a women’s suffrage clause in Utah’s proposed constitution would cause Congress to reject it and thus hurt Utah’s chances at statehood. These people urged the Utah constitutional convention delegates to leave equal suffrage out of the constitution, arguing that it should be submitted to Utah (male) voters as a separate measure. 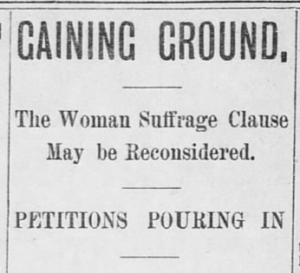 Lucinda Jensen was the first woman elected to the state legislature from Box Elder county on November 6, 1928. She served as chairman of the Committee of Public Health during her term in office. 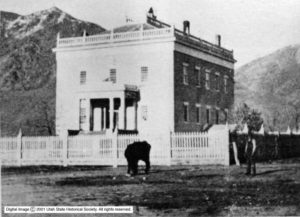 The Woman’s Suffrage Association of Brigham City held many of its monthly meetings at the Brigham City courthouse. Years later, the women’s Woodrow Wilson club held meetings there as well. 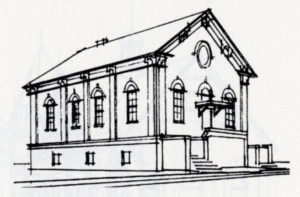 Willard Tabernacle, conjectural drawing by Richard W. Jackson in “The Meeting Places of the Latter-day Saints.”

The Woman Suffrage Association of Willard held many meetings in the Willard Tabernacle, including a special meeting in 1894 with leading Utah suffragists Emmeline B. Wells and Mary A. Freeze.