Petitions in favor of women's suffrage

On April 18, 1895, Cache County’s delegates to the state constitutional convention presented eight petitions in favor of including an equal suffrage clause in Utah’s proposed constitution. Both women and men had signed the petitions. 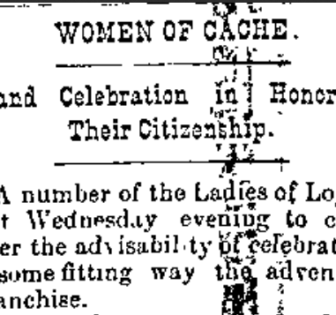 After Utah women regained voting rights with statehood, the leading women of Logan threw a “grand celebration” for the “advent of Franchise”. A large suffrage meeting and banquet, followed by a ball with the Harris Orchestra, took place on January 17, 1896. 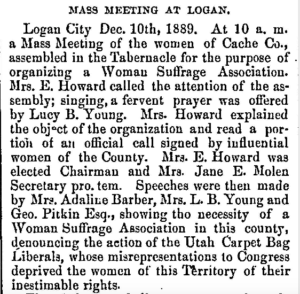 On December 10, 1889, 78 women of Cache County assembled in the Logan Tabernacle to establish a suffrage association. Mrs. E. Howard was named as Chairman and Jane Molen was named as secretary. The meeting came in reaction to the a group these women called the “Utah Carpet Bag Liberals,” whom they believed had “misrepresented” the women of Utah territory to Congress in lobbying for legislation that had revoked all Utah women’s voting rights in 1887. Similar to many other suffrage associations in Utah, local Relief Society presidents such as Adeline Barber and Jane Molen were named as officers of the association. Their leadership roles helped them to recruit members and spread the word about the suffrage association’s activities. 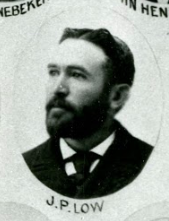 The women’s suffrage question was one of great importance at the 1895 Constitutional Convention of Utah. On April 18, the 46th day of the convention, Cache County’s delegates presented eight petitions from women and men in support of including an equal suffrage clause in the constitution. All of Cache County’s Democratic delegates voted in favor of equal suffrage. One of the delegates, James Paton Lowe, stated to Convention members that he campaigned in support of women’s suffrage and “cut out of the newspaper…two clauses referring to…equal suffrage [for] women, and placed them in his hat” as a reminder of his duty. 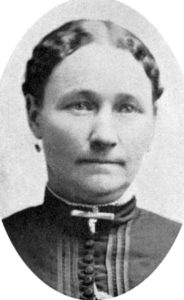 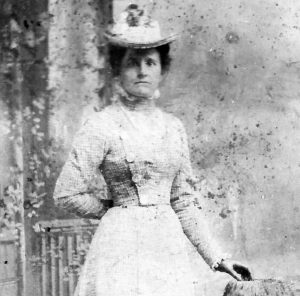 Loucretia Boynton was a well-liked leader of the Cache County Republican Party who organized Ladies’ Republican Clubs in towns and cities across Cache County. She was also a regular speaker at Republican conventions, and her goal was to promote and expand support for the McKinley administration. One newspaper report described her as an “indefatigable and intelligent worker.” Boynton’s efforts show one of many ways in which Utah women successfully influenced politics and persuaded their fellow voters.

Bessie Morehead was born in 1867 in Smithfield, Utah. She was very talented, and by 1891 she was a member and featured soloist of the Logan Opera Company, where she was billed as one of Utah’s “best and favorite” vocalists. Bessie performed in many special events and theater productions. She also taught elementary school and became an expert in kindergarten education, completing a course in teaching kindergarten education in Salt Lake City.

Bessie served as Cache County recorder for two terms – 1897-98 and 1899-1900. Her political life began with an angry confrontation in 1896 during the nominations for county offices.  She was nominated with much furor over the current county recorder, Charles Hyde, who wanted to continue in his job. “Bessie Morehead knocked Charlie Hyde out in the democratic convention but Charlie has unsheathed his knife and started after Miss Morehead’s scalp. Women had better look out for Chivalrous Charlie. He will have his revenge.”

From the editor of the Logan Journal: “Since the election and elevation of Mr. Hyde two years ago a new element has been admitted into politics in Utah. The women are a strong factor and they are deserving of recognition. This was a strong sentiment among the Democrats of Cache county and the time convention day rolled around it had become a conviction.”

Charlie Hyde switched parties and ran against Bessie as a Republican. Not only that, opposition came from her own LDS stake president who implied that she wasn’t as good a Saint as Charles Hyde was. The editor of the Logan Journal was aghast and defended her reputation. It appears the political rhetoric was alive and well in early Utah! Still, Bessie won by 1300 votes and went on to serve two terms.

Other Women Elected to County Office

After Utah statehood, Cache County women consistently won election to the office of county recorder. Jennie P. Slater was elected Cache County Recorder in 1900 and Rebecca Eames was elected to the position in 1902 and 1904. They were followed by Sarah Merrill in 1906, Linnie Telford in 1908, Kate Preston in 1912 and 1914, Louisa Barber in 1916, and Laura R. Merrill in 1920.

The question of women’s suffrage was of great importance in Utah’s constitutional convention of 1895. Utah women had been stripped of their voting rights by Congressional legislation in 1887, and the Utah Woman Suffrage Association had been working to regain women’s suffrage since 1889. They believed their best hope to secure women’s voting rights was to ensure an equal suffrage clause was included in the proposed state constitution being drawn up at the constitutional convention. On April 18, 1895, delegates from Cache county introduced the following petitions asking for an equal suffrage clause to be included in the constitution: 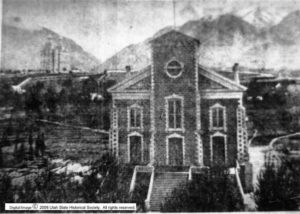 The Cache County Woman Suffrage Association was organized in the Logan Tabernacle on December 10, 1889. Many suffrage association meetings took place there, and in January 1896 Cache County women held a celebratory meeting and banquet in the Tabernacle in honor of women’s newly regained voting rights.