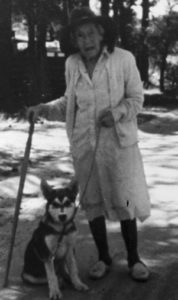 Minnie Crouse Rasmussen was born in 1882 on the Park Livestock Ranch in Brown’s Park, Utah. As a young adult, she was appointed as “registration agent of election district No. 10” in Brown’s Park in 1906. She homesteaded an area that is still known as “Minnie’s Gap,” and later served as postmaster of the town of Linwood, Utah, from 1917-1952, where she also ran a mercantile store with her husband George. In 1963, Linwood would become a casualty to the construction of the Flaming Gorge Dam, and Minnie’s home was one of the last to remain occupied. When government inspectors informed Minnie that she would need to “begin moving the next day, she offered them tea and seemed agreeable to what they were saying. After they left, she poured gasoline on her carpet, lit a match to it, and burned her home to the ground.” She then moved to Arizona where she lived until her death, at age 99, in 1981. In 1982 a memorial service and 100th birthday party were held in her honor at the Williams Ranch in Minnie’s Gap, Wyoming. 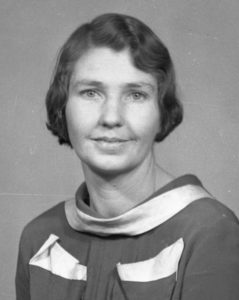 Matilda “Tillie” Bascom was born in 1901 and raised in the Lucerne Valley, now known as Manila, Utah. She shared a name and occupation with her mother, Matilda Warby Nelson, who began training Tillie in the field of midwifery at age 14. Tillie delivered her first baby in 1916 when she was only 15 years old. With the influenza pandemic in 1918, Tillie helped take care of those infected with the disease in the Uintah Basin. She never lost a single patient. Tillie was later in charge of the school lunch program at Uintah High School, and was also a foster grandparent in the school system for many years.

Mabel Williams Philbrick was the Daggett county public health nurse for 47 years, from 1935 to 1982. She taught monthly Maternal and Child Health Conferences, later referred to as the Well Baby Clinic, in the county courthouse in Manila. Her other duties as county nurse involved educating and treating county residents for many health concerns including communicable diseases, cancer, heart disease, and school hygiene. Mabel also worked as the director of the Daggett County Foster Care Department in the 1960s.

Waneta Lamb served as Manila town clerk and then councilwoman from 1963 to 1966.  She helped to establish the Daggett County Historical Society. 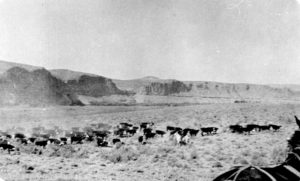 Minnie’s Gap in Brown’s Park was named for Minnie Crouse Rasmussen, who homesteaded there in 1914.