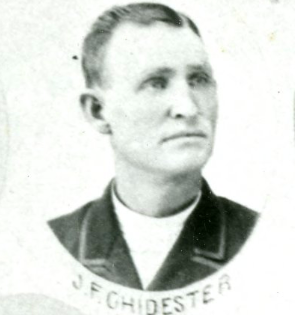 On this date, Garfield County delegate John Chidester introduced petitions from 121 of his constituents to the constitutional convention. The petitions supported the inclusion of an equal suffrage clause in Utah’s proposed constitution.

In the November 1945 election, Panguitch residents elected Mabel Nielsen as their mayor, along with Suse Johnson as a councilwoman and Amelia Woodard as recorder. 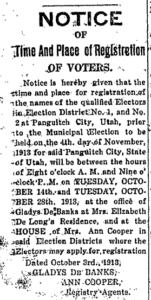 Ann Dodds Cooper was born in 1880 in the town of Panguitch, Utah. She never moved from the town of her birth, and raised her own family of 3 children there. In 1908, just a few weeks after the birth of her youngest child, Ann’s husband Nathan passed away. In 1912, she ran for and won the office of Garfield County recorder, a position to which she was re-elected in 2 subsequent elections. Ann was active in the Republican party, serving as a leader and organizer of the Garfield County Women’s Republican Club. In 1918, Ann was elected to serve as the county clerk. Following her tenure in office, she worked as a licensed real estate abstractor for Garfield County. She remained active in her community, serving in leadership roles in the Women’s Civic Club of Panguitch as well as the American Legion branch there.

In 1926, Ann once again returned to public service and was elected as Garfield County Treasurer. Much like her success in serving as county recorder, Ann was re-elected to the same position for next 14 years. Ann spent most of her adult life in public service for Garfield County, a remarkably talented and well-respected member of the Panguitch community. She passed away in 1948 and is buried in the Panguitch Cemetery.

Kate Taylor served as Garfield County recorder for more than 15 years, beginning in 1917. 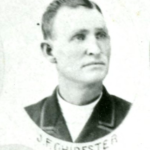 During Utah’s constitutional convention in the spring of 1895, delegated debated whether women’s suffrage rights should be included in the proposed constitution or left out of it and put to the voters to decide at a later date. On April 16, 1895, Garfield County delegate John Chidester introduced these petitions from his constituents in favor of including women’s equal suffrage in Utah’s constitution:

In the 1945 election held November 6, Panguitch residents chose Mabel Nielsen to be their mayor, along with Suse Johnson as a councilwoman and Amelia Woodard as recorder. Turnout was high for the election, possibly due to the interest created by the fact that there were women running for each city office. 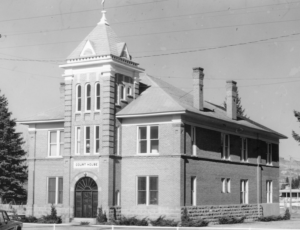 Women in elected office such as Ann Cooper did business in the Garfield County Court House in Panguitch.