On April 11, 1895, Ann E. Webster’s petition for an equal suffrage clause in Utah’s state constitution was presented to the Utah Constitutional Convention. Webster and 443 other Iron County residents had signed the petition.

The Iron County Woman Suffrage Association was organized in Parowan on this day when suffrage leaders visited from Salt Lake. 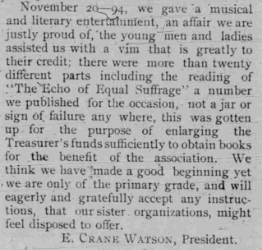 The Iron County WSA held an evening of musical and literary entertainment featuring an original composition: “The Echo of Equal Suffrage.” 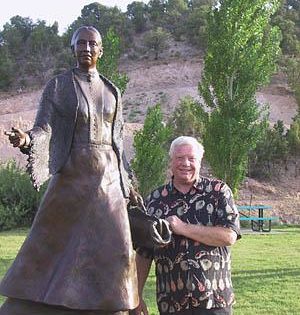 A statue of suffragist and midwife Paulina Phelps Lyman was dedicated in Parowan’s Heritage Park on July 24, 2006. Sculptor Stanley Johnson portrayed Lyman on the way to deliver a baby. 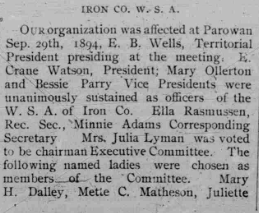 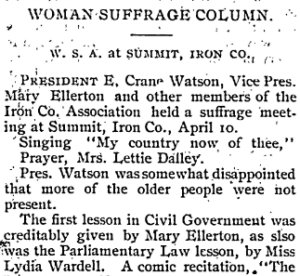 On April 10, 1895, the Iron County Woman Suffrage Association held a meeting in Summit urging local women to organize a suffrage association in the town. Leaders from the Iron County Woman Suffrage Association gave lessons in civil government and parliamentary law, as well as comic recitations, readings from the association newsletter, and impromptu speeches. Paulina Phelps Lyman, a trained midwife, told the meeting that although she could not remember when she had first been “converted to woman’s rights,” she “thought [we] could as well go to the polls to vote as to the Post Office, and did not think any houses would be neglected” if Utah women regained the right to vote. After voting in favor of establishing an organization, the women and men present elected Sarah Hulette president of Summit’s Woman Suffrage Association, with Annie Dalley, Lilly Dalley, Jessie White, Millie Allen, Fanny Farrow, Leonora Hulette, Sophia Dalley, Ordine Nielson, and Lorcena Dalley filling other leadership roles. 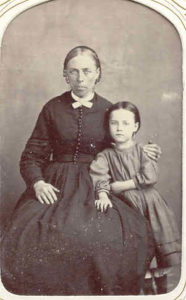 When Paulina Phelps Lyman was 60 years old, she traveled from Parowan to Salt Lake City to train as a midwife under Dr. Ellis R. Shipp. Lyman sought this training because she already provided medical care in her community, from treating burns to delivering babies, and she wanted to be better equipped. On returning to Parowan, Lyman trained two other women and continued to help those who came to her, delivering hundreds of babies over the course of her life. A statue of Lyman stands today in Parowan’s Heritage Park.

On April 11, 1895, Ann E. Webster’s petition asking for an equal suffrage clause in Utah’s state constitution was presented to the Utah Constitutional Convention. Webster had collected 443 signatures for her petition in addition to her own, and sent it to Robert W. Heyborne, a convention delegate from Iron County. Webster’s and other petitions in favor of women’s suffrage played an important part in the convention’s decision to include a clause in the proposed state constitution that stated “The rights of citizens of the State of Utah to vote and hold office shall not be denied or abridged on account of sex. Both male and female citizens of this State shall enjoy equally all civil, political and religious rights and privileges.” 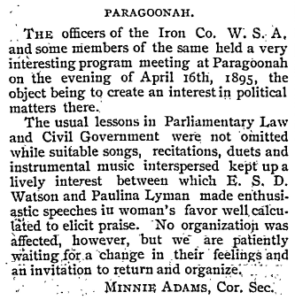 On April 16, 1895, leaders of the Iron County Woman Suffrage Association gave a program in Paragonah in an attempt to inspire local women to form their own suffrage organization. Similar to the regular meetings of the W.S.A. in held in Summit, Iron County, women taught lessons on parliamentary law and civil government, as well as reciting poems, performing music, and giving enthusiastic speeches. Although the women of Paragonah were not induced to form a suffrage association that evening, Minnie Adams, corresponding secretary for the Iron County W.S.A., held out hope for the future. She reported to the Woman’s Exponent that “we are patiently waiting for a change in their feelings and an invitation to return and organize.” 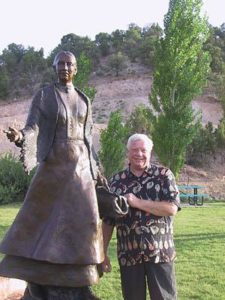 A statue of Paulina Phelps Lyman was dedicated in Parowan’s Heritage Park on July 24, 2006. The statue, sculpted by Parowan artist Stanley Johnson, was commissioned to honor Lyman’s work as a midwife in delivering hundreds of babies in the area between her arrival in 1858 and her death in 1912.