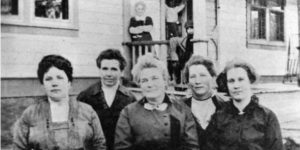 On 7 November 1911, Tamar Hamblin, Luella McAllister, Blanche Hamblin, Vinnie Jepson, and Mary Chamberlain were elected as members of the Kanab Town Council with Mary Chamberlain elected as council chair (mayor). The women’s election was a surprise to the because others had put them on the ballot as a joke. Who got the last laugh is debatable, since the women reversed the prank: they accepted their election and served for the 1912-1913 term. Despite opposition, the women passed and enforced laws and influenced citizens to tidy up the cow town, which earned them a place in history as the first all-woman town council in Utah. Read more about their accomplishments here.