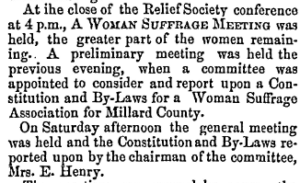 The Millard County Woman Suffrage Association held its first meeting in Fillmore on May 25, 1889. A committee created a constitution and by-laws for the organization, which were unanimously adopted, and 45 women paid the 25 cent membership fee to enroll on the spot. The women next elected officers from every town in the county and heard a few women give speeches and read essays. M. A. Y. Greenhalgh, who was elected president that day, told the gathered women that “it was not a favor they were asking, but simply the rights of every citizen to vote for the men who make the laws, under which they live.”

Jennie Warner Ashby was involved in politics years before women in the rest of the country were able to vote. She was born on June 22, 1882 in Millard County and married Rodney Ashby at the age of 19, having two children with him. Her husband died after only three years, leaving Ashby a young widow, so she began working at the Millard Courthouse as city treasurer of Fillmore. In 1906 she was elected Millard Country recorder, a position she held for several years. The office of country reorder was one way many women broke into politics across Utah, and later, across the United States. Ashby’s opponents in each election were women; she won the 1910 election by a wide margin of over 1,500 votes. Jennie

Delilah King Olson was outstanding in the educational, religious and political life of Fillmore and Utah. Her first teaching job was at age 14 and she continued teaching at various points in her life.  She also served eighteen years on the board of examination of teachers in Millard county.

A strong advocate of suffrage, Delilah insisted that the nation’s progress depended on equal rights.  She was involved in petitioning the State Convention to adopt women’s suffrage in the state constitution. She was elected to Millard County Recorder in 1896, the first year women could run for office in Utah, and reelected in 1898. Delilah also served as Vice chairman of the Democratic Party for the Fillmore District. When she died in 1907, her memorial in the Deseret News stated, “Delia was staunch, true and patriotic, a sincere disciple of Susan B. Anthony, an ardent suffragist.”