The Woman Suffrage Association of Morgan County was organized in the Morgan city schoolhouse.

On this day a petition was introduced to include women’s equal suffrage rights in the Utah constitution, including signatures from Morgan County residents.

Faye Eliza Williams was elected to represent Morgan County in the state legislature. 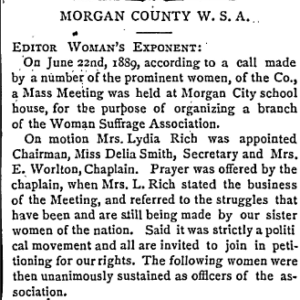 The Morgan County Woman Suffrage Association was organized as a branch of the National Woman Suffrage Association and the Utah Woman Suffrage Association on June 22, 1889, in a mass meeting at the Morgan City schoolhouse. Leading women of Morgan County had called the meeting because they wanted to join the movement to regain voting rights for Utah women, which had been revoked by Congressional legislation in 1887. After voting in officers and approving by-laws, the women invited their newly-elected leaders to address them. Hulda Cordelia Smith, the new president, stated that “her heart was enlisted in the Woman’s cause, [and that she] never could see why women should be subject to laws she had no hand in making, nor ruled over by those not of her choice.” Esther Francis, the first Vice-President, stated that she “thought the women had never abused the right of suffrage and thought its being taken from them a great injustice.” 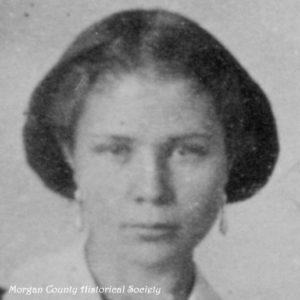 Hulda Cordelia Thurston Smith was born June 1, 1846 to Thomas Jefferson Thurston and Rosetta Bull Thurston in Iowa, while they were traveling west on the Mormon Pioneer Trail. The wagon train only stopped half of a day before proceeding onward. In 1855, the family once again found themselves living the lives of trailblazers as they became the first white settlers of the Morgan Valley. Living in such a remote area meant she was only able to occasionally attend school until she was 11 years old. Resources were scarce and students had to share books, slates, and pencils, so she took every opportunity to study on her own. “Uncle Tom’s Cabin” was the first story book she read and she recalled, “How my soul loathed those slave traders and cruel masters and loved little Eva St. Clair and Uncle Tom”. She worked side by side with her father taking care of the animals, and remembered that “father said he would rather have me than a boy to help him”.

In 1863, at age 17, Hulda became the first teacher in Morgan County. She had to teach many of the students English first, as most were Scandinavian immigrants. She was a great teacher even though she had regrets about her own lack of education. She married Willard G. Smith on April 15, 1865, the same day Abraham Lincoln was assassinated. In 1881 she took classes from the first medical school in Morgan, and eventually became one of the first women to be certified by the state to practice medicine. She became highly sought after by people in the county and at one point was the only licensed practitioner in Morgan.

Smith found herself in many leadership roles within the community, serving as president of the first Primary Association for children and as Stake Relief Society Secretary for 18 years. Eliza R. Snow complimented her on the completeness of her minutes and financial records. Smith was an ardent believer in equal rights for women and in 1889, she was elected to preside over the Morgan County Women’s Suffrage Association. She also served as school Trustee when such positions were considered only suitable for men. She was tasked with organizing county fair exhibits to choose items to go to the 1893 World’s Fair in Chicago. One exhibit she sent was of two ostrich eggs brought in 1856 from Africa, which won second prize in Chicago. Smith passed away in 1939 at the age of 93 in Lewiston, Idaho, one of the last three surviving 1847 pioneers. 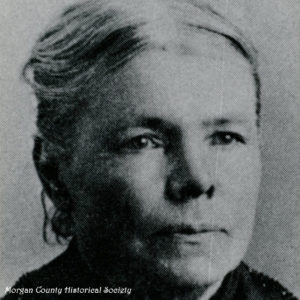 Esther Charlotte Emily Weisbrodt Francis was born June 19, 1836 in Turin, Italy, where her parents worked for the German consulate. This gave her special educational opportunities and she graduated in the field of language teaching, excelling in German, Italian, French, English, and some Spanish. In addition, she held a degree in mathematics and calculus, an unusual accomplishment for a woman at the time. She put her skills to use teaching at a ladies’ seminary. She met her future husband, Samuel Francis, while he was serving a mission for the Church of Jesus Christ of Latter-day Saints in Italy and they were married in 1857. She was converted and worked in the mission office translating church materials and hymns into French, German, and Italian.

By May 1861, the Francis family and their two young children migrated to America from England, and by 1863 they were living in Morgan, Utah where they would spend the rest of their lives serving their community. Francis was a midwife with knowledge of medicinal plants and drug preparation and use. Her herb garden was the envy of the county and she used it to heal and treat many. She also taught mathematics, languages, and music in the first school in Morgan.

The public service Francis rendered was unique for a pioneer woman. She translated mail and acted as interpreter for the probate and district courts, and her knowledge of math and calculus lead many to seek her help in figuring the tons of hay in a stack, bushels of grain in a bin, or acres of land on their farm. She assisted early surveyors with calculating the proper acreage per lot, and also participated in the surveying and laying out of Morgan City into blocks, lots, and streets. On June 22, 1889, Francis was chosen to be first Vice-President of the Morgan County Woman Suffrage Association, showing that she was respected and looked up to by other women in the community. She was later elected WSA President for Morgan County. Francis Peak, on the border of Davis and Morgan counties, was named in her honor and a monument was placed there to honor the contributions she made to the development of Morgan Valley. Francis passed away in her Morgan home on February 21, 1913 at age 77. 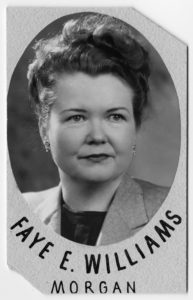 Faye Eliza Williams was a poet and public servant from Morgan County. She attended the University of Utah and worked for the Union Pacific Railroad at the Grand Canyon, Zion National Park, and Sun Valley, Idaho. Williams joined the Women’s Navy Corps at the start of World War II, serving from 1942-1945 and eventually becoming a lieutenant. After the war, she was Morgan County Deputy recorder and was elected to the 1947-1948 term of the Utah state legislature, the first woman to serve from Morgan County. She worked to establish a Navy Reserve Training Center in Ogden and to make Weber State University a four-year institution. From 1956 to 1978, Williams and her brother Joseph ran their family store, the J. Williams and Sons Company, which operated for a total of 113 years with five generations of Williamses working there. A charter member of the Fine Arts Study Group in Morgan, Williams was an accomplished writer, creating poems and pageants and and winning a state poetry contest in 1948.

The Morgan County Woman Suffrage Association was organized in the Morgan school house on June 2, 1889. The building is no longer standing, but a suffrage plaque will soon honor its former location on land housing the library and the Morgan County Historical Society.

Francis Peak, on the border of Davis and Morgan counties, was named in honor of Esther Weisbrodt Francis in honor of her contributions to the development of Morgan Valley. A monument at the top of the peak honors her “expert knowledge of mathematics” and her role in surveying and laying out Morgan City.