Mary Francis Yeager and her husband John Shelby came to Utah from Indiana sometime between 1883 and 1885 and settled in Laketown in Rich County. Mary got involved in politics as Utah gained statehood. In October 1895, the Rich County Democratic convention held at Laketown chose committees to study prospective candidates for legislature and superintendent of schools. Mary was elected 1st Vice President on credentials and part of the permanent party organization.

In 1896, Mary was elected Rich County Recorder in the first Utah election where women could run for public office. She posted an announcement that she would move to the county seat of Randolph in order to fulfill her responsibilities. “I beg leave to extend to the democrats, and also my republican friends of Rich county, my thanks for the support they gave me on the 3rd of November and will say in return that I expect to make my residence in Randolph—as soon as necessary arrangements can be made—where I will serve the people as Recorder of Rich Co. to the best of my ability.”

It’s amazing Mary did this with 8 children at home, the youngest age 5. While in office she had her ninth child. Once her term as recorder was over, she continued to be active in politics by continuing as Precinct Chairman. She died April 2, 1910 in Brigham City after a battle with cancer cut short her life at age 53. 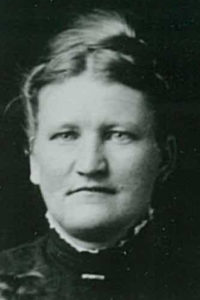 Catherine Peart was born in 1877 at Randolph. On September 30, 1896 she married Allen Burt Snowball, who also had grown up in Randolph. Allen served an LDS mission in the southern United States soon after they were married and Catherine (“Kate”) lived with her parents. During that time, she was was elected County Recorder in 1898. At 21, she may have been one of the youngest women to win election to public office. During Catherine’s term, her 1st baby died and she became pregnant again. Even under these difficult circumstances she performed her assigned duties, with what others called her beautiful penmanship. Her youngest son, Morrell, shared that Catherine was highly organized, was the President of every organization in her church at various times, kept a spotless house and took care of the family finances. She died in California in 1941.

Other Early Women in County Office

A directory of Rich county officials published in September 1909 shows that Pearl Brough was the Rich County recorder and Josephine Reed was county Superintendent of Schools.