A Woman Suffrage Association was organized for San Juan County on this date in Bluff, Utah.

On April 22, 1892, Elizabeth Howard and Mary Freeze of Salt Lake organized the San Juan County Woman Suffrage Association in Bluff, Utah.  Speakers at the inaugural meeting included the visitors from Salt Lake, and also Delia Lyman, Marsha Hammond, and Mary Jones of Bluff. Mary Jones conceded that the women of San Juan county were “new hands in the labor of Women’s Suffrage,” but that they would be capable of adding much value to the cause.  Harriet Barton acted as secretary of the association.

1896 midwifery class in Bluff. Courtesy of David Walton. Delia stands in the back, 3rd from R.

Adelia (Delia) Robison Lyman was present and spoke at the organizational meeting of the San Juan County Suffrage Association. Born in 1848 in Illinois, Delia crossed the plains in a Mormon wagon train, and then moved with her family to Fillmore, Utah. She later married and joined other “Hole in the Rock” pioneers who established the town of Bluff in San Juan County. Delia graduated from a midwifery class in 1896 in Bluff that was taught by Hannah Sorensen. She died in 1909.

Harriet Barton was the secretary of the San Juan County Woman Suffrage Association. She and her husband raised 7 children along the banks of the San Juan River in Bluff Utah after traveling with other Hole in the Rock pioneers to Bluff in 1880. She died in 1896 at the age of 40.

Born in 1861 in Parowan, Utah, Sarah Jane Perkins moved several times during her growing up years, living in 5 counties of the Utah territory before the age of 10. She married John Rogerson in 1879 and lived in 3 more counties of the territory as well as in Mancos, Colorado within the first decade of her marriage. Sarah taught school to about 40 children in an LDS church meetinghouse in Colorado, and when she relocated to Monticello, Utah she again became a teacher, this time in her own home and with only 9 students—3 of which were her own children. But over time as the town of Monticello grew, so did her class.  Within a few years she was teaching 20-30 students.

The town of Monticello also often gathered in the Rogerson home. A newspaper article in 1898 reminisced about the first Christmas in Monticello in 1888, when the small town gathered for a Christmas dinner and dance in the newly-built log home of Sarah Jane and her husband John. Since the Rogerson home was “good sized” and also had a separate dug-out cellar where food could be prepared and cooked, it was an ideal location for a holiday gathering. The menu consisted of “chicken, plum pudding, plenty of vegetables…breads, cakes, cookies and…grape jelly tarts.” Of necessity, each family brought their own plates and silverware. The town gathered a week later in the Rogerson home to celebrate New Year’s Day, where they were surprised to witness a total eclipse of the sun!

Sarah was appointed deputy county clerk of San Juan County in 1900, and was elected that fall as San Juan County Treasurer. She was appointed San Juan County Clerk in June of 1901, a position she would hold for 15 years. In addition to her county clerk duties, Sarah also worked as a deputy treasurer and deputy assessor for San Juan county. She was an active member of the Republican party and served as the secretary for the San Juan Republican Committee in 1902.  After her tenure of office as a county clerk ended in 1916, she served as a town clerk in Monticello for another 8 years. After the death of her husband in 1928, Sarah once again traversed Utah, living with several of her grown children for extended periods of time. She passed away in Monticello in 1936.

Kate Wood was elected San Juan County Treasurer as a Progressive in 1912, despite the fact that Republicans won most offices in the county that year.

Kate Perkins was elected San Juan County Clerk and County Recorder in 1898, two years after Utah women gained the right to hold public office in the state constitution. Other women would follow her in county office. 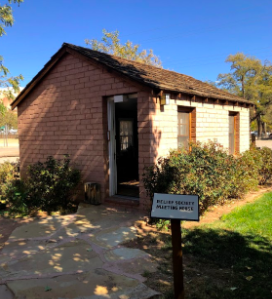 The women of Bluff met in this Relief Society Building for many church and community events. It’s likely that the organization of the San Juan County Woman Suffrage Association occurred here. 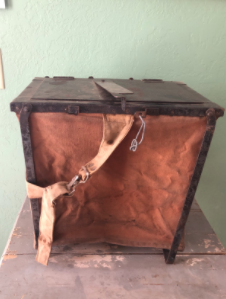