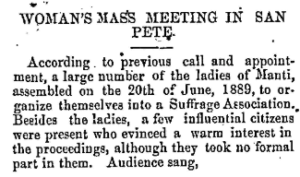 The Sanpete County Woman Suffrage Association was organized on June 20, 1889, in a mass meeting held in Manti. Emmeline B. Wells and Zina D. H. J. Young had traveled to Manti from Salt Lake City to establish an affiliate organization of the Utah Woman Suffrage Association which had been organized in January of that year. At the first meeting, which several interested men attended but did not participated in, Sanpete County women elected Ellen Jakeman as their president and also elected vice presidents from the major towns in the county: Esther S. Anderson of Manti, Helen Armstrong of Ephraim, Tina M. Erickson of Mt. Pleasant, Mary Ann Frantzen of Spring City, Clarissa Faux of Moroni, and Augusta Swalberg of Gunnison.

The suffrage association continued to meet regularly in Manti and often held social events to raise money and awareness of the need for women’s suffrage in Utah. For example, they held a suffrage dance in 1892, a patriotic memorial service for George Washington’s birthday in 1893, and marched as part of Manti’s 4th of July parade in 1894. 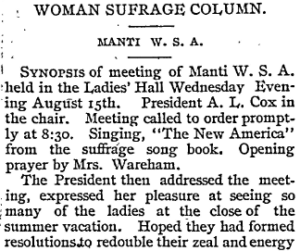 In addition to the Sanpete County Woman Suffrage Association, which met less frequently, local women also formed a Manti Woman Suffrage Association. A report of a typical meeting on August 15, 1894, shows that both women in leadership positions and those in the general membership addressed the meeting, encouraging each other’s efforts, reminding those present of the history of the women’s rights movement, and giving comic speeches poking fun at social problems of the day that women hoped to alleviate when they gained voting rights. President A. L. Cox “expressed her pleasure at seeing so many of the ladies at the close of the summer vacation, [and] hoped they had formed resolutions to redouble their zeal and energy in the good cause of Equal Rights during the coming season.”

The “Woman’s Suffrage Association” was a participant in Manti’s 4th of July parade in 1894. In addition to a young woman representing “The Goddess of Liberty” and 26 young men and women on horseback representing the original 13 colonies, local suffragists marched as a cohort along with political leaders, religious leaders, and representatives of various industries.

Manti suffragists weren’t the only ones who marched in Independence Day and Pioneer Day parades—we know for sure that Beaver suffragists decked out a carriage with banners of their own for the 24th of July parade in Beaver that year.

On April 18, 1895, as debate on the suffrage clause was winding down in Utah’s Constitutional Convention, delegates from Sanpete County introduced two petitions in favor of an equal suffrage clause granting women the right to vote and hold public office. The first petition was signed by W. H. Olsten and 221 others, and the second was signed by Joel Shomaker and 30 others. These and other petitions from across the territory helped to regain voting rights for women when Utah became a state in 1896.