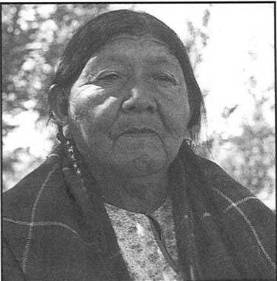 Courtesy of University of Utah Press.

Maud Moon was a tribal elder in the Confederated Goshute Nation and a gifted storyteller, born in Chin Creek, Nevada in 1884. Beginning in 1967, Moon agreed to be be interviewed and recorded by Wick R. Miller from the University of Utah. With the help of an interpreter, Moon and Miller audio-recorded 42 narratives, including traditional stories and descriptions of traditional Goshute lifestyle, such as “foraging practices, healthy living, life as a traditional Goshute woman, and her thoughtful reflections on how European contact had negatively affected her people.” Much of scholars’ ethnographic knowledge of traditional Goshute lifestyle, including religious beliefs, language, and use of local plant life, comes from these interviews, now stored at the University of Utah. Maud Moon’s story has since been featured in many publications, including a play called Dust Eaters and several books about the Confederated Goshute Nation. 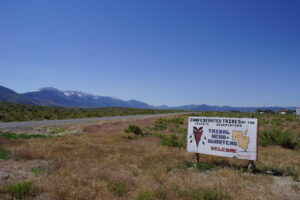 Goshute people have long lived in the desert region southwest of the Great Salt Lake. As white settlers came to the area in the 19th century, they made land and other resources more scarce for the Goshute and other Indigenous nations whose lives in Utah predated Anglo pioneers. In 1914, a permanent Goshute Indian Reservation was established south of Ibapah, Utah. “The creation of reservations ensured the Goshute’s ownership of their traditional homeland, but the reservations also brought Indian agents and federal employees with the mission of reordering Goshute life along a white model.” (Utah American Indian Digital Archive) The reservation was expanded to include the Eight Mile, Goldsmith, and Gash ranches in 1939. In 1984, the reservation grew again with the purchase of the Will Cession homestead and the Kelly Ranch. Today, the reservation covers approximately 112,870 acres of land in White Pine County, Nevada and the Juab and Tooele Counties of Utah.

http://utahindians.org/archives/ctgr.html Genevieve Fields, The Confederated Tribes of the Goshute Reservation

On November 25th, 1940, the Confederated Tribes of Goshute Reservations adopted a constitution and by-laws that detailed important aspects of tribal organizations, rules for electing officials, terms of office, and more. The tribe elects five council members to serve for terms of three consecutive years; the tribal council chooses one of its five members to serve as tribal chairperson. The tribal council governs the reservation by making decisions regarding economic development, law enforcement, education, health, irrigation, social services programs, tribal administration and finance, senior citizens’ programs, and wildlife parks and management.

Constitution and By-Laws of the Confederated Tribes of The Goshute Reservation, Utah Dennis R. Defa, "The Goshute Indians of Utah," in Forrest S. Cuch, ed., A History of Utah's American Indians, 2003.

Dust Eaters is a full-length play written by Julie Jensen about the problematic relationship between white European settlers and the Goshute people over seven generations, spanning from the 1870s to the 1990s. Maud Moon, a tribal elder and renowned Goshute storyteller, is one of the main characters in the latter half of the play. Although Jensen is not Native American, she asserts that she was prepared to write this play in part by the fact that her father taught school on the Goshute Reservation in the 1930s and was an amatuer archaeologist, which led the young Jensen to spend her weekends tracking in the desert, seeking to better understand Goshute history and culture. Despite her discomfort writing about a culture to which she does not belong, Jensen argues that if such stories are not written, mistakes go unacknowledged and important histories are left untold. What do you think?

Digital copy of the play. Synopsis from Dramatic Publishing. 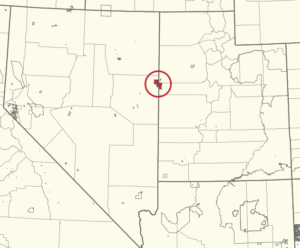 The Deep Creek Confederated Goshute Reservation is on some of the tribe’s ancestral lands, located south of Ibapah, Utah.