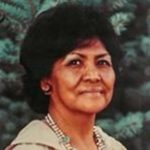 Mae Timbimboo Perry was a tribal historian of the Northwestern Band of the Shoshone Nation. After being sent to a boarding school in the 1920s where she was forbidden from acknowledging her Shoshone culture, Mae began writing down her tribe’s stories when she was in high school. Today, members of the Shoshone nation treasure Mae’s work and her memory. Read our feature of Mae by her grandson Darren Parry here. 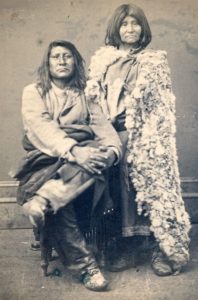 Beawoachee’s husband Bear Hunter was killed in the Bear River Massacre on January 29, 1863. She later married Chief Sagwitch, a fellow survivor. Beawoachee, Sagwitch, and the Northwestern Band of Shoshone joined the Church of Jesus Christ of Latter-day Saints in 1873. They settled in Washakie, Utah in 1880 and were among the first American Indians to own land under a new amendment to the U.S. Homestead Act. 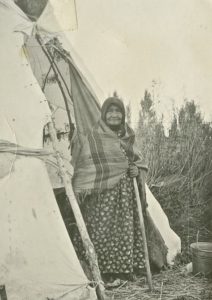 Rachel Perdash survived the Bear River Massacre as a young girl in 1863. She escaped and ran to spread the news of what had happened. 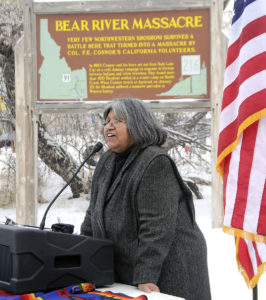 Patty Timbimboo-Madsen serves as the Cultural and Natural Resource Director of the Northwestern Band of the Shoshone Nation. She is also a member of the Native American Remains Review Committee and Coordinator of the Northwestern Band of the Shoshone Tribal Library. She has played a key role in gathering 150 years’ worth of Shoshone cultural history, which is currently in the process of being converted and catalogued into a public online archive hosted by Utah State University. She has also recorded several interviews discussing what it means to be a Northwestern Band of Shoshone tribal member, the costs of assimilation, the effects of the Bear River Massacre on her people, and the challenges of preserving the tribe’s culture for future generations. She is Mae Timbimboo Parry’s granddaughter.

On January 29, 1863, the United States Army massacred hundreds of Shoshone people at Boa Ogoi, near present-day Preston, Idaho. As Mormon settlers pushed the Northwestern Shoshone people off their land, they were deprived of important natural resources and began to starve, which led them to raid Mormon settlements. When this rebellion came to the attention of the Army, 200 California volunteers under Union military Colonel Patrick Edward Connor attacked the Northwestern Shosone’s camp. Historians estimate that the troops killed between 250 and 400 men, women, and children, making this the largest single massacre of Native Americans by the United States Army to date.

Tribal historians and leaders such as Mae Timbimboo Parry have helped to preserve that memory by successfully petitioning the federal government to put up interpretive signs marking the site of the Bear River Massacre, which were put up by the National Park Service in 1990. Her grandson, chairman Darren Parry, has been instrumental in building an interpretive center to share the tribe’s story with visitors. Today, the Shoshone Nation has established a prayer tree at the site, where people gather every January to remember and grieve. 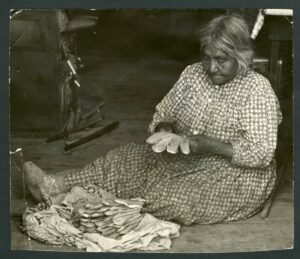 Cohn Zundel makes gloves in this undated photo, part of the collection being digitized at USU. Northwestern Band of the Shoshone Nation.

Patty Timbimboo-Madsen, Cultural and Natural Resource Director of the Northwestern Band of the Shoshone Nation, has played a key role in gathering 150 years’ worth of the tribe’s cultural history, which is currently in the process of being converted and catalogued into a public online archive hosted by Utah State University. This archive, supported by a large server, will include digitized oral histories, a major component of the tribe’s cultural history, as well as historical documents, which are currently being gathered and catalogued. 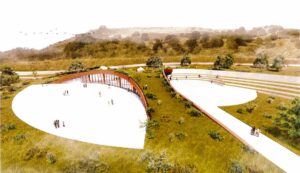 “Boa Ogoi,” or “Big River,” is the Shoshone name for the Bear River Massacre. The Boa Ogoi Cultural and Interpretive Center is currently under construction near the site of the massacre, a direct continuation of Mae Timbimboo Parry‘s efforts to tell Shoshone history from the Shoshone perspective. The new center’s mission is to 1) “educate and enlighten” visitors about the Bear River Massacre and its devastating effects; 2) teach about the culture of the “Newe,” or the Shoshone people; and 3) to “restore natural resources” by redeveloping the area with the intention to “bring back the natural habitat” as it was before the arrival of white settlers. 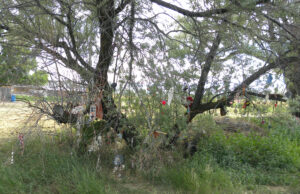 The Northwestern Band of the Shoshone Nation has established a prayer tree at the Bear River Massacre site, where people gather every January to remember and grieve.

This monument was put up near the site of the Bear River Massacre in 1932 by the Franklin County Chapter of the Daughters of the Utah Pioneers, the Cache Valley Council of the Boy Scouts of America, and the UtahPioneer Trails and Landmarks Association. This was before history acknowledged the incident as a massacre, and the 1932 plaque, titled “The Battle of Bear River,” is attached to the monument telling an antiquated story of the massacre as a ‘battle.’ A second plaque added in 1953 honors nearby Latter-day Saint women who cared for injured soldiers, but says nothing about the murdered men, women, and children. This monument demonstrates the problems of telling tribal history only from an outsider perspective, without including the voices and experiences of the people whose story is being told. Tribal chairman Darren Parry plans to contextualize this monument at the site to educate visitors about the ways in which history can be distorted when all voices are not heard.