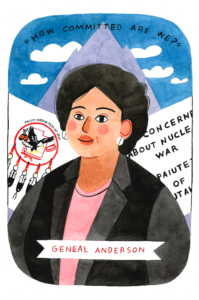 Geneal Anderson, former chairwoman of the Paiute Indian Tribe of Utah Tribal Council, was born in 1952, just before the Termination Era, when many Indian tribes were denied official federal recognition. After graduating from Rancho High School in Las Vegas, Nevada and then Brigham Young University, she was elected to sit on the Interim Tribal Council, which enacted the Paiute Indian Tribe of Utah Constitution when the tribe was federally restored in 1980. As tribal chairperson, she became an influential leader on a local and national scale and focused much of her activism on protecting “downwinders,” or people who lived downwind of nuclear test sites and reactors. Click here to read our full biography of Geneal Anderson by current Chairperson of the Paiute Indian Tribe of Utah (and Geneal’s niece), Tamra Borchardt-Slayton. 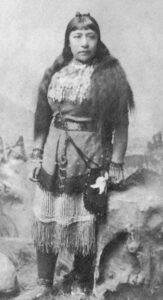 Sarah Winnemucca Hopkins was born into the Paiute tribe sometime in 1844. She became an advocate for Native people, traveling throughout the United States to speak about their history. Sarah wrote a landmark book, Life Among the Paiutes: the Wrongs and Claims in 1883, which held the first copyright received by a Native American woman. In beautiful prose, Sarah provided a unique window into Native American relations from their perspective. Life Among the Paiutes was so important to the study of Native American history that it was re-published in 1994. A statue of Sarah Winnemucca represents Nevada in National Statuary Hall in the U.S. Capitol.

Katie Frazier was born in 1891 and lived to see her 100th birthday. She was a dedicated educator, dancer, and artist who used her talents to become an important cultural leader of the Paiute tribe. She received a number of awards in recognition of her efforts to preserve and teach about traditional elements of Paiute culture, including National Indian Educator of the Year (1985), the Governor’s Award for Excellence in Folk Arts (1986), and Outstanding Senior Citizen of the Year (1989).

April 3, 1980 - Federal Restoration of the Paiute Indian Tribe of Utah

On April 3rd, 1980, the Paiute Indian Tribe of Utah was federally restored by an act of Congress (25 U.S.C. § 761). This followed a period of termination, where many tribes, including the Paiute were denied official recognition, meaning that they were not identified as Federally Recognized Indians or as having a sovereign status. The belief that Native Americans should abandon their traditional lives and become “Americans” had been the basis of government policy for decades. This particular era’s policies cut tribal members off from all federal benefits, services, and economic support. They had to comply with criteria outlined by the Bureau of Indian Affairs, including: 1) acculturate into the dominant society, 2) be economically resourceful and self-supporting, 3) and be willing to withdraw themselves from government services.

Geneal Anderson was one of the representatives who drafted the Constitution of the Paiute Indian Tribe of Utah when the tribe regained official recognition. The Preamble defines the purpose of the tribal government, including “to better exercise the privileges and powers of self-government, to conserve our tribal and band property, to develop our resources, to preserve Paiute language and culture, to promote the welfare of ourselves and our descendants, and to secure our rights and privileges.” Five constituent bands – Cedar, Indian Peaks, Kanosh, Koosharem, and Shivwits – make up the Tribe.

Sarah Winnemucca, born into Paiute tribe sometime in 1844, was a powerful advocate for Native people. Acting as a lobbyist, lecturer, and spokesperson, she travelled throughout the United States to speak about the history of her tribe. Sarah wrote a landmark book, Life Among the Paiutes: the Wrongs and Claims in 1883, which held the first copyright received by a Native American woman. In beautiful prose, Sarah provided a unique window into Native American relations from their perspective. Life Among the Paiutes became so important to the study of Native American history that it was re-published in 1994. 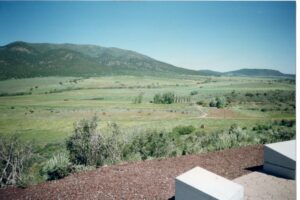 Site of the Mountain Meadows Massacre.

On September 11th, 1857, a Mormon militia attacked the Baker-Fancher emigrant wagon train while they were passing through Mountain Meadows in southern Utah. After five days of siege, the militia leaders told the emigrants that they would be safe from the local Paiute people if they would surrender their weapons and allow the Mormons to escort them through the territory. Instead, the militia brutally murdered 120 of the emigrants, including men, women, and children. The role of the Southern Paiute people in this atrocity has been the subject of serious debate for decades. Some accounts say that some Mormon militiamen disguised themselves as Paiute, while others say that the Mormons armed and incited the Paiute against the emigrants. At a memorial service held on the 150th anniversary of the massacre, Latter-day Saint apostle Henry B. Eyring read an official church statement expressing regret to the Paiute people, “who [had] unjustly borne for too long the principal blame for what occurred during the massacre.”