Aileen Hatch was one of two women elected to the Ute Mountain Ute’s first tribal council in 1940. According to a contemporary magazine article, both she and Emma South Beecher were both elected unanimously. Hatch served as secretary-treasurer. 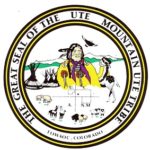 On June 6, 1940, the Ute Mountain Ute Tribe established their tribal constitution, which grants the right to vote to every adult member of the tribe. The Constitution established formal equality for women by specifically listing both men and women as tribal members. Two women, Aileen Hatch and Emma South Beecher, were on the committee that wrote and signed the Constitution. In 2014, women represented a majority on the Tribal Council. Of course, it’s important to note that women had power and rights in the Ute Mountain Ute tribe long before the United States pressured the tribe to adopt a more Angl0-European mode of government. 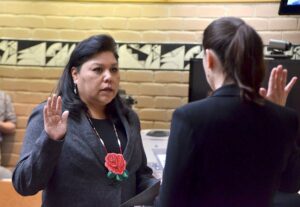 With the election of DeAnne Wall to the Ute Mountain Ute Tribal Council, women held the council majority for the first time in the tribe’s history. Other female council members at the time included Juanita Plentyholes, Regina Lopez-Whiteskunk, and Priscilla Blackhawk-Rentz.

At the swearing in ceremony, “Tribal Chairwoman Juanita Plentyholes smiled and said women would now get their way. She…predicts issues such as economic development, health care, housing and education will be better-addressed.”

“Women can be just as powerful as the men,” Constance Wall said as well-wishers surrounded her in-law with congratulatory greetings. “I think this is going to be a very strong council.” 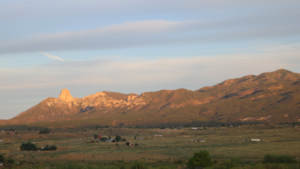 The Tribal Headquarters of the Ute Mountain Ute tribe are located in the town of Towaoc, Colorado, at the base of Sleeping Ute Mountain. According to the Colorado Encyclopedia, “Prior to contact with Europeans, the Ute people inhabited a vast expanse that included much of present-day Utah, Colorado, and northern New Mexico…The band eventually composing the Ute Mountain Ute people is referred to in historic texts as both the Weeminuche and Weenuche.”

“The federal government passed the Dawes Act in 1887, which divided the nation’s Native American lands into allotments that belonged to individual tribal members…The Weenuche resisted the Dawes Act…under Ignacio’s leadership, [they] found the idea so alien to their tradition that they refused to accept allotments and moved to the western portion of the Southern Ute Indian Reservation, which later became the Ute Mountain Ute Reservation. Lands not allotted, or about 85 percent of the reservation, were declared “excess” by the federal government and opened to white settlers in 1895.”