Students will engage with primary source documents to explore the reasons behind memorializing people in public art. Students will craft written or oral statements to support an argument in favor of installing a statue of Dr. Martha Hughes Cannon, Philo T. Farnsworth, or Brigham Young in National Statuary Hall. Students will learn about the historical significance of Dr. Cannon, and will create an invitation and write a speech for a mock installation ceremony for the Dr. Martha Hughes Cannon statue. 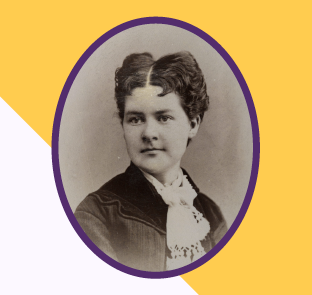 Students will conceptualize, generate, develop, and organize artistic ideas and work. They will complete and refine media art works

Students will generate artistic work by conceptualizing, organizing, and completing their artistic ideas.

Students will be able to read and understand informational text and primary source material.

Students will craft an argument in favor of or against the topic being discussed.

Statuary – noun, a group or collection of statues

Illustrious – adjective, well known, respected, or admired for past achievements

Commemoration – noun, a ceremony or celebration in which a person or event is remembered

Amendment – noun, an alteration of or addition to a motion, bill, constitution, etc.

Legislature – noun, a governing body that makes laws and can also appeal or amend them

Memorial – noun, something, especially a structure, established to remind people of a person or event

Memorializing – verb, to preserve the memory of, commemorate

Suffrage – noun, the right to vote in a political election

Note: When sharing link for fillable worksheets with students in Google Drive, each student will need their own copy of the worksheet. This can be accomplished by changing the last part of the url you share with students from “edit” to “copy”. This instructional video from Melissa Nikohl on You Tube (begin watching at the 4:45 minute mark) may be helpful with this process.

Of the 100 statues currently on display in the National Statuary Hall Collection, 9 of them are women. Several states, including Utah, will be replacing current statues of men from their states with statues of women. Of the 100 statues, 7 of them are native American or native Hawaiian and 2 are of Hispanic descent.  Notably, Florida will be replacing a statue of a Confederate general with educator/activist Mary McLeod Bethune, which will be the first statue of an African American in the National Statuary Hall Collection.

Have students read excerpts from the Louis Collins article in the Deseret News, “Utah considers placing female statue in nation’s Capitol amid national conversation on monuments and values”.  Have students respond to the questions:

(Resources for analyzing primary source documents can be found here.)

Have students read the 2018 House Legislative Bill on the creation of the Martha Hughes Cannon statue committee.

Have the students fill in the Primary Source Analysis graphic organizer accordingly. Teachers may need to model how to complete the organizer if students do not have experience analyzing primary source documents. If needed, students can complete this in small groups, or as an entire class.

Tie this activity in to the following discussion:

Why is this event happening in THIS particular time and place? What events or anniversaries may have influenced the replacement of Mr. Farnsworth with Dr. Cannon?

Then have students choose between the following two primary sources to compare and contrast with the first one about Martha Hughes Cannon: the 1945 legislative bill to create a Brigham Young statue committee, or the 1987 legislative bill to create a Philo T. Farnsworth statue committee. Have students analyze the primary sources, placing them in historical context.

Have students complete the Compare/contrast graphic organizer individually or in small groups.

What do all three historical people share in common?  How are they different?

The purpose of this assignment is to engage students in historical thinking and writing, to have them understand primary source documents within their historical context. The depth of critical thinking is more important than the breadth of historical knowledge.

Have students fill out the K section of the KWL form: What do you know about Martha Hughes Cannon?

Have students share their answers in small groups or with the class.

Have students fill out the W section of the KWL form: What do you want to learn about Martha Hughes Cannon?

In small groups, as a class, or individually, have students use the following resources to learn more about Martha Hughes Cannon:

Have students complete the L section of the KWL form: What have you learned about Martha Hughes Cannon? Encourage students to be curious about historical context as well as wanting to know more details/facts about her life.

Tie this learning activity into the following discussion:

In the previous lesson, some students may have argued against having a statue of Dr. Martha Hughes Cannon sent to the National Statuary Hall Collection.  Does learning about her contributions to our state change your decision?

Have students craft a written argument either in favor of or opposed to the installation of a statue of Dr. Martha Hughes Cannon in the National Statuary Hall Collection. Students are expected to use evidence-based conclusions in their writing/speaking.

Have students choose one of the following activities, or both if time allows

Have students display their invitations in a Gallery Walk.

Have students, who feel comfortable doing so, share their speeches in small groups or with the entire class.

Other Books and Literary Sources about U. S. Capitol