Imagery and Strategies Used in the Women’s Suffrage Movement: Developing a Get-Out-the-Vote Campaign

Students will analyze primary source documents from the women’s suffrage movement–both nationally and in Utah–to examine the tactics, strategies, and imagery used in this social movement. They will also evaluate the effectiveness of these tactics and strategies in affecting social and civic change. As an optional step, students will use this information as the means to creating their own campaigns to encourage Utahns to register to vote and cast votes. 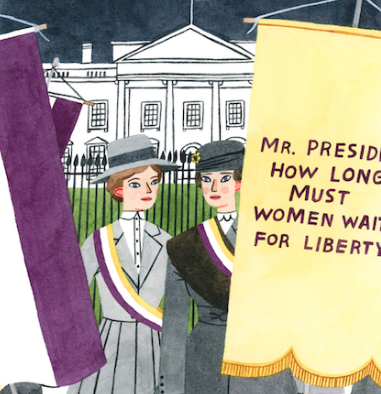 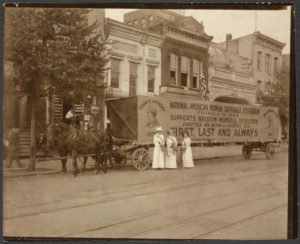 Three women stand in front of a horse-drawn wagon with a sign supporting the NAWSA. Courtesy of Library of Congress.

At the national level, NAWSA did not prevent African-American women from becoming members, but state and local associations often did. This led many African-American women to form their own, separate suffrage organizations. The National Association of Colored Women’s Clubs (NACWC) merged several black women’s social clubs in 1896 to support women’s suffrage along with issues of great importance to black women such as anti-lynching efforts. 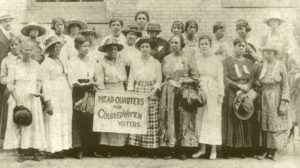 Women in the National Association of Colored Women’s Clubs.

NAWSA continued the work of its two founding organizations by pursuing the tactics that had been used for decades: petitioning and lobbying legislators at both the state and national levels. Utah suffragists worked with the NWSA and then NAWSA to push for a women’s suffrage clause to be included in Utah’s state constitution adopted in 1895. Although women gained suffrage in four western states in the 1890s (Wyoming in 1893, Colorado in 1893, and Utah and Idaho in 1896), the next state victory would not come until almost a decade and a half later, when women gained voting rights in Washington state in 1910. These long years in between are sometimes referred to as the “doldrums” of the suffrage movement. Many women and men organized against suffrage during this time period. Local anti-suffrage organizations had long existed, but a national anti-suffrage movement did not officially form until the National Association Opposed to Woman Suffrage was founded in 1911. Anti-suffragists, both women and men, argued that women did not want the vote, that they were incapable of making rational decisions about politics, and that political involvement would take them away from their family duties. 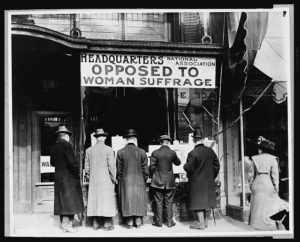 Headquarters of the National Association Opposed to Woman Suffrage. Courtesy of Library of Congress.

When Woodrow Wilson was elected President in 1912, NAWSA planned its first parade in Washington, DC for March 3, 1913–the day before his inauguration–to call for a constitutional amendment for women’s suffrage. President-elect Wilson had stated during the campaign that he believed suffrage was an issue for the states, not the federal government. Suffragists argued that just as the 15th amendment prohibited states from restricting suffrage based on race, another amendment was necessary to prevent them from doing so based on sex. NAWSA leaders planned the parade as a show of force and a way to gain publicity for the cause. Women had held suffrage parades before in states like New York, but it was still considered very unladylike for women to walk in the streets at that time. Still, nearly 8,000 women marched in the D.C. parade, ordered by state. Organizer Alice Paul, who had worked with more militant British suffragettes in the UK, asked black women to march in the back because many white women didn’t want to march next to black women. Many black women did march in the back, but several black suffragists, including Ida B. Wells-Barnett, ignored this direction and marched with their states anyway. This was just one example of the ways white women often sidelined black women and their interests in the women’s rights movement. During the parade, suffragists were heckled, tripped, and even assaulted by crowds in town for the inauguration, and the D.C. police failed to step in (the police’s refusal to protect the suffrage marchers led to congressional hearings and cost the D.C. police superintendent his job). About 100 marchers ended up in the hospital, but their mistreatment made the march a major news story and drew national attention. 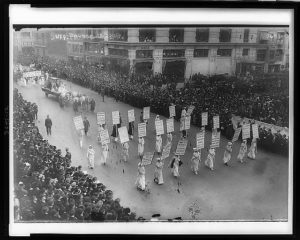 After the 1913 parade in Washington, Alice Paul wanted to organize more parades and protests to get the public’s attention (following in the footsteps of militant British suffragettes), but NAWSA leaders opposed the idea because they didn’t want to be seen as too radical. Paul and others broke away to form the Congressional Union in 1913, which was later renamed the National Woman’s Party (NWP) in 1917. Both NAWSA and the NWP were connected to Utah suffragists, with national leaders coming through Utah several times in the 19-teens to hold rallies and gather signatures on petitions for a national suffrage amendment. However, more traditional Utah suffragists did not support the NWP’s tactics. From their headquarters on Capitol Hill in D.C., the NWP organized the first pickets of the White House, starting in January 1917, where “silent sentinels” held banners criticizing President Woodrow Wilson for his lack of support for a national women’s suffrage amendment. They refused to stop picketing when the U.S. entered World War I later that year, and many women were arrested for obstructing traffic on the sidewalk, including two Utah women, Minnie Quay and Laverne Robertson. Several women went on hunger strikes in prison and were force-fed, and the newspaper reports garnered public sympathy for the cause. After President Wilson announced his support for a women’s suffrage amendment, Congress passed the 19th Amendment in the spring of 1919. Once 36 states voted to ratify it, the Amendment became law on August 26, 1920. 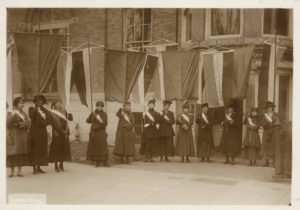 The 19th Amendment removed gender restrictions on voting and was a huge victory for the 70+ years long fight for women’s suffrage. Still, there were many women (including Native-American and Asian women) who still could not vote because they lacked citizenship due to racially-discriminatory citizenship laws. American Indians did not gain voting rights until 1924, when Congress granted them U.S. citizenship through the Indian Citizenship Act. Still, many states, including Utah, made laws and policies which prohibited American Indians from voting, claiming that American Indians living on reservations were residents of their own nations and thus non-residents of the states. In 1957, the Utah legislature finally repealed the legislation that prevented American Indians living on reservations from voting, becoming the one of the last states in the U.S. to do so. 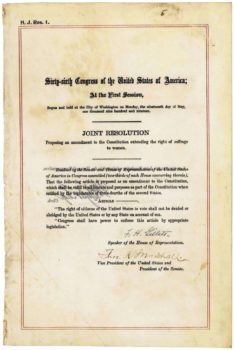 Suffragists like Susan B. Anthony led the campaign for women’s voting rights. 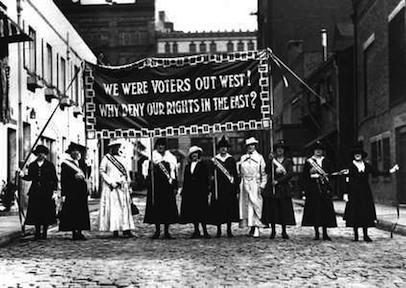 (noun) a representative who votes on behalf of others

Susa Young Gates was one of many delegates representing the women of Utah at national suffrage conventions. 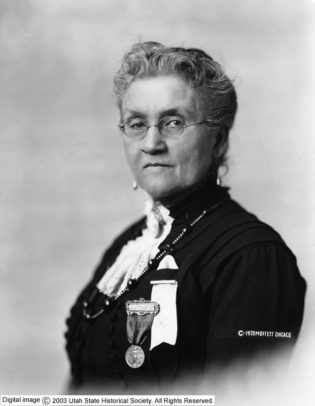 (noun) People who are assumed to “listen to reason;” committed to “friendly persuasion;” push social norms a little, but still within levels of respectability.

Carrie Chapman Catt was a leading suffragist who was considered more moderate; she favored continuing to use tactics that had been used during previous decades and keep herself in the good favor of male leaders. 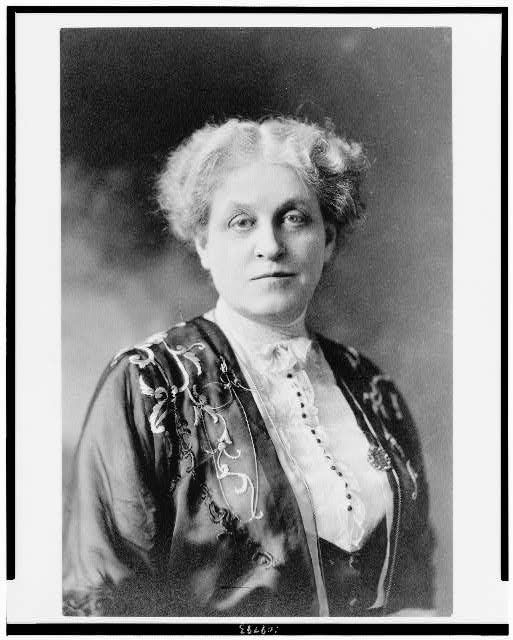 (noun) People who express greater degrees of dissatisfaction than moderates; they tend to be more “combative” and push more against social norms and ideas; more extreme.

Alice Paul was considered radical because of her White House protests. 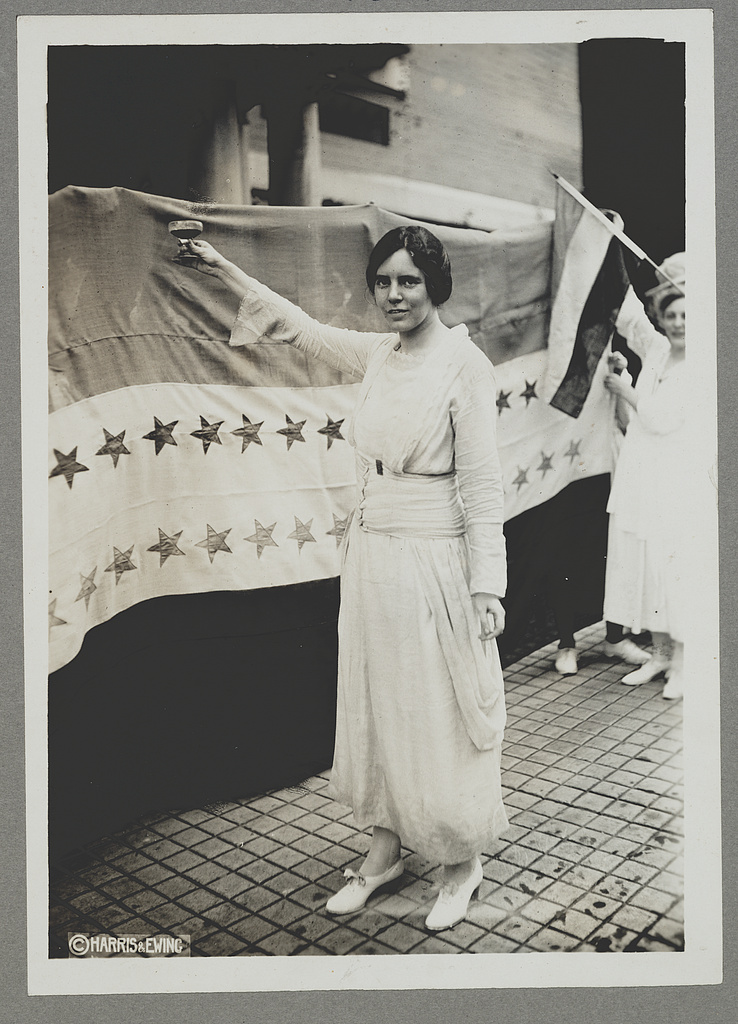 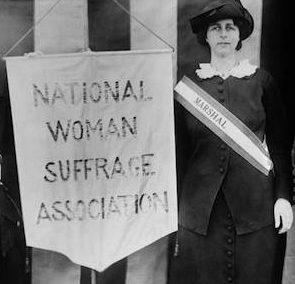